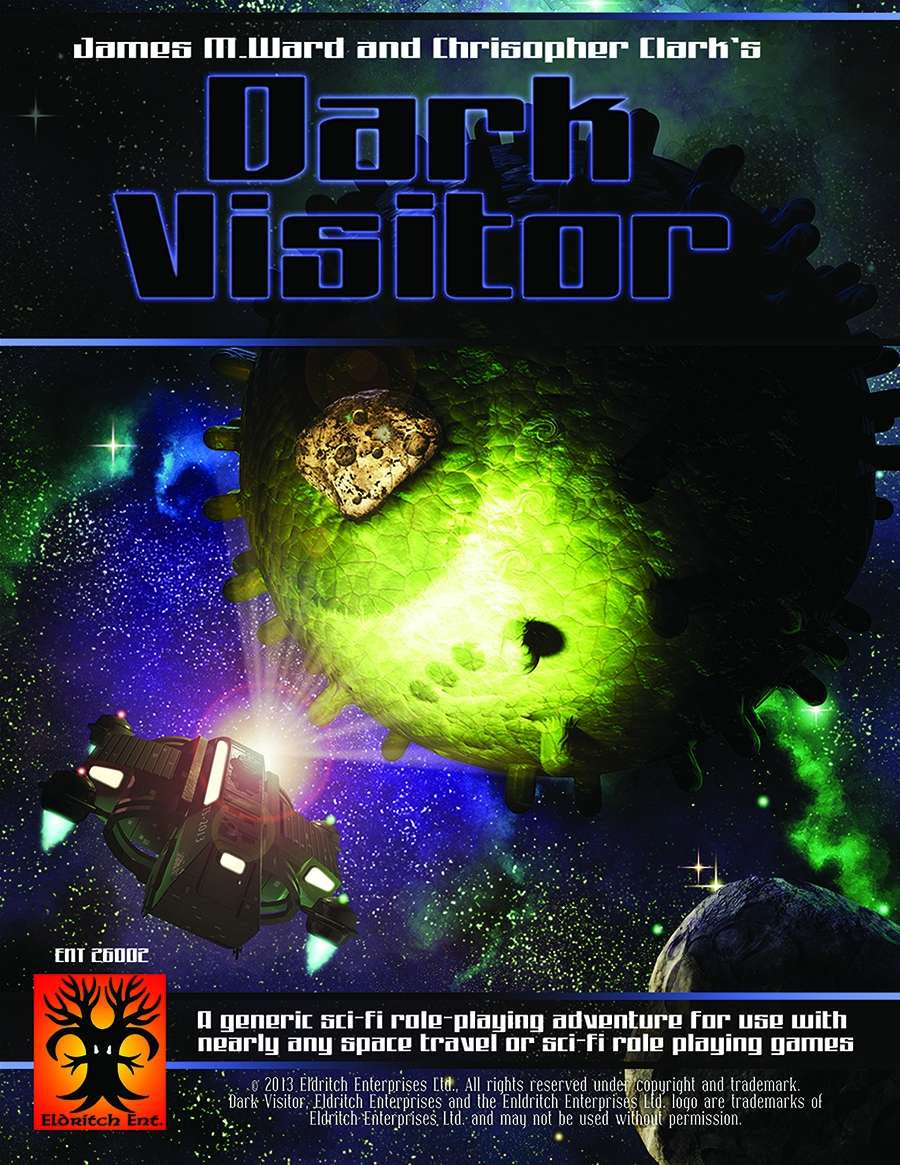 Get It Right
HERE

This is a monster of science fictional campaign that takes place aboard a 'living ship' and forget those Star Trek Next Generation Tin Man thoughts because this is much, much, worse and a far darker a tale.
This is a horrifying journey into a science fiction nightmare for your PC's as only James Ward and Chris Clark's twisted minds can dream up. This is also a mini sequel of sorts to James Ward's Dark Visitor. However this is a monster of a campaign clocking in for one hundred and one pages of action packed encounters.
According to Drivethru Rpg:
Dark Visitor is an epic adventure into the bowels of an alien spacecraft; a world unlike any you have previously seen.  It is a living vessel, filled with undiscovered life forms, strange technologies, dangerous and unexpected pitfalls, and yes, fabulous treasures. A well-equipped exploration or salvage team could make a handsome profit.  They could just as easily die a gruesome and unforeseen death.
There are many ways to die in space.  We just added a few more.
Not for the faint of heart, Dark Visitor is designed for exploration by three or more characters of low to moderate levels, and armed to the teeth with items.  It can be used as either a stand-alone adventure or as the sequel to Dark Outpost.
According To James Ward's Blog :

"Anyway, Chris is just finishing up two layout projects. DARK VISITOR and RAIN OF TERROR and they look terrific. DARK VISITOR is a generic science fiction campaign. A ship made out of fungus comes into the solar system looking for a scout ship. The player characters are sent to explore the ship. Chris and I co-authored that one, but really Chris did the lion’s share of that project. Chris wrote RAIN OF TERROR by himself and I have rarely seen a product look as good as that one does. It’s an amazing adventure and I’m very jealous because he has thought of a new adventure hook I have never seen used before in my 40+ years of creating adventures. We hope to show those available to you in the first week of December."
You can find more over on Mr. Ward's Blog HERE

Dark Visitor picks up where Dark Outpost left off if your PC's were lucky to survive and thrive in that deadly little adventure right over HERE. Where Dark Out was a sprawling mini campaign sandbox with monsters easily converted. Dark Visitor is a fully fledged sand box campaign with deadly encounters, high weirdness for PC's and even treasures!
The writing is crisp, clear and very entertaining. The elements of the adventure are very easily adapted to any retroclone or science fiction adventure rpg. Dark Visitor has lots of potential though for those looking for an X - plorer campaign with room for lots of expansion.
For Stars Without Number this is a hell of a campaign that could last several months as the PC's explore a very alien mega dungeon.
The adventure is system agnostic and has the feel of a 1970's or 80's science fiction film where the PC's are up to their necks in alien situation where they're actions could decide the fate of not only themselves but the entire party. The encounters are well balanced and with the conversion notes this one could easily be adapted to even a Star Frontiers game if one was so inclined.
Both adventures speak volumes about the quality of writing that we see from Mr. Clark and Mr. Ward. This adventure would make a heck of a convention set and could well lead PC's up several levels if they survive long enough to enjoy the fruits of their labors.
These adventures could be used with Metamorphosis Alpha 1st edition as add on campaigns and bring PC's into the bounds of outer space very easily. The artifacts and technologies are great. The puzzles and encounters are interesting, challenging, and somewhat deadly if PC's are not careful. Be warned that Dark Visitor is a monster of a campaign and will take several months to play through. Combined with Dark Outpost and you've got the makings of a complete and total campaign for some time to come!
Commentary

I'm not going to lie to you folks, I enjoyed reading the hell out of this adventure. I found myself clapping my hands and wringing them with delight to subject my friends and players to this one. There is a tone of desperation that seems to run through the entire adventure as if the PC's are going through the paces of some demented organism out to deal with them.  I mean this in a fun way. This is a highly recommended adventure and it would work with many of the science fiction games currently on the market and a few that are no long as well.
The lion's share of the campaign takes its time with the PC's and really subjects them to some trials and puts them through their paces. I keep thinking either X plorers or Stars Without Number for these adventures!
Grab some players, grab some dice, and grab your copy of this one today!

For other fine products from Eldritch Enterprises
Go Right Over
HERE
Posted by Needles at 4:08 PM