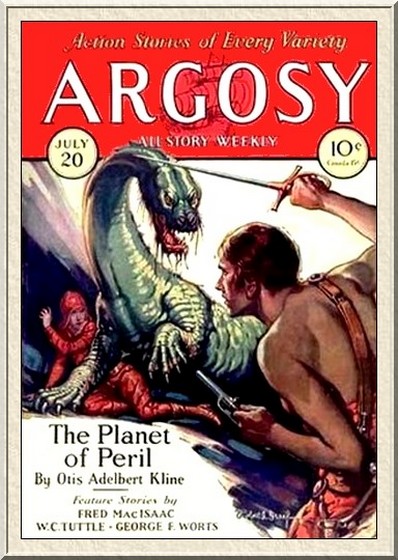 Down load it right over
Here!

I was going over my 1963 copy of Planet of Peril by Otis Adelbert Kline and doing a cross compare with Edgar Rice Burroughs Atmor(Venus) books. Mr. Kline was a rather interesting fellow and preceeded his famous friend to Venus a couple of years earlier. Kline while known as a literary agent of Robert Howard was infact a pulp writer in his own right.
According to wiki:
Otis Adelbert Kline (1891–1946) born in Chicago, Illinois, USA, was an adventure novelist and literary agent during the pulp era. Much of his work first appeared in the magazineWeird Tales. Kline was an amateur orientalist and a student of Arabic, like his friend and sometime collaborator, E. Hoffmann Price.

You can read more about him right over
HERE
Kline wrote a number of Venus based novels that appeared as a seriel in Weird Tales. His venus was a rough and ready planet of sword and Lovecraftian weirdness. A place were his soul switching protagonists rubbed elbows with his Martain heroes as well. There were six tales of his that appeared in both Argosy and Weird tales. The Mars novels and Venus books respectively.
According to Wiki :
Kline's novels normally received serial publication in magazines before their release in book form. The Mars novels appeared in Argosy, and Port of Peril in Weird Tales (as Buccaneers of Venus).

The Outlaws of Mars (1933)
The thing about Kline's writing is that there is strange sort of sardonic quality to his fetid Venus. As if there's some hidden menace lurk over the hero's shoulder and that the planet is far older then the inhabitants guess. The other fact about Kline is that his characters are all a part of his greater shared universe. The first of his books Planet Of Peril is the one for download. All though his Venus shares many similarities with his friend Edgar Rice Burrough's Venus books and they could take place on the same planet there is a bit of a distinctive feel to Kline's books. They have a very  sword and sorcery vibe to them even though there aren't any sorcery in them at all. They have a lot going on in them with battles, kidnaping, lost races, encounters, weird creatures and more.
Using Kline's Venus As Fodder For Your Sword and Sorcery Campaign
Kline's Venus is the fetid hot house planet of the old pulps with a pirate twist and heavier then air ships moving through them. These are ancient declining cultures with the best of them far behind their societies. These are places of adventure, sword play, and occasionally weird technology in the offering.
I've used Kline's Venus numerous times as a pocket universe planet where adventurers have had to go to retrieve ingredients for one spell or another. A place where ancient ruins rub shoulders with Deep One style fishmen of incredible violence and insane horror. Let's be honest here though the name Edgar Rice Burroughs carries far more fame with it then Kline's and I've combined their Venuses into one pulptastic hot house planet filled with Lovecraftian ruins, ancient treasures, and horrors beyond the pale of mankind just waiting to be sprung on players. Edgar Rice Burroughs Magazine even had a very well done article on Kline's Venus that addressed these concerns.
Right over
HERE


For many of the retroclone game systems out there Kline's Venus might be just the sort of place for an expedition and not an extended campaign. I have found that players enjoy Venus as a diversion rather then an extended world for a campaign. The exotic nature of the planet and its tribes makes it very different experience then say a Barsoomian Mars or a Lunar excursion.
Keep the relic technology from games like Carcosa, Astonishing Swordsmen of Hyperborea, and Arduin very, very rare. The atmosphere of Venus will play marry havoc with delicate instruments. For AS&SH bards are a nice way of getting from one world to another. They're reliability is questionable at best however.
For a game like Stars Without Number this version of Venus might simply be yet another pocket universe pulp location. Given the nature of psychics in SWN this might be just the place for a quick mission or diversion. Psychics are going to be in for a bit of a shock when the nature of Venusian psychic powers reveal themselves. Many of the native population display some form of psychic power themselves.
This planet could display some very valuable biological specimens as well for genetic engineering possibilities.
Buccaneers of Venus was serialized in Weird Tales with some really odd and striking covers. 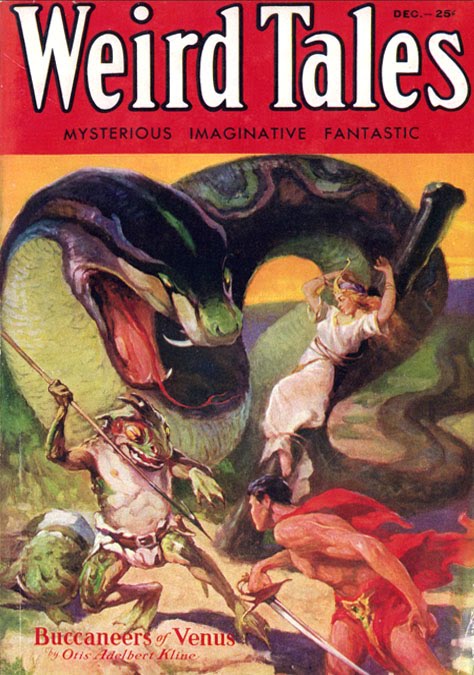 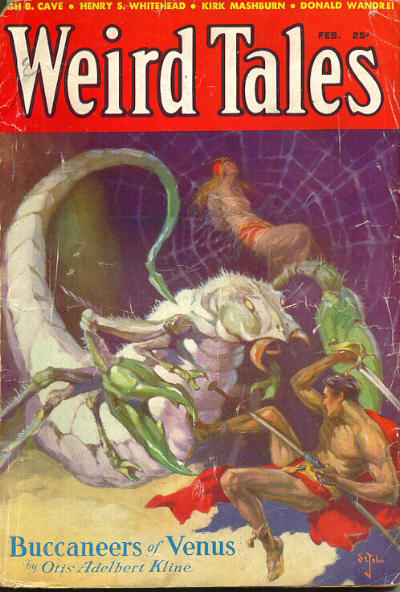 I remember first hearing the name Otis Adelbert Kline.back in the early 80's in a used book shop and the conversation with a friend about how he was a friend and rival of Edgar Rice Burroughs. It is true that they were friends but not rivals at all.


Kline is best known for an apocryphal literary feud with fellow author Edgar Rice Burroughs, in which he supposedly raised the latter's ire by producing close imitations (Planet of Peril(1929) and two sequels) of Burroughs's Martian novels, though set on Venus; Burroughs, the story goes, then retaliated by writing his own Venus novels, whereupon Kline responded with an even more direct intrusion on Burroughs's territory by boldly setting two novels on Mars. Kline's jungle adventure stories, reminiscent of Burroughs's Tarzan tales, have also been cited as evidence of the conflict.[1] While the two authors did write the works in question, the theory that they did so in contention with each other is supported only circumstantially, by the resemblance and publication dates of the works themselves. The feud theory was originally set forth in a fan press article, "The Kline-Burroughs War," by Donald A. Wollheim (Science Fiction News, November, 1936), and afterward given wider circulation by Sam Moskowitz in his book Explorers of the Infinite. Richard A. Lupoff debunked the case in his book Edgar Rice Burroughs: Master of Adventure. Among the evidence cited by Lupoff discounting the feud: (1) no comment from either writer acknowledging the feud is documented, and (2) family members of the two authors have no recollection of ever hearing them mention it. In response to Lupoff's investigations Moskowitz identified his original source as Wollheim's article, while Wollheim stated, when questioned on the source of his own information: "I made it up!"

Kline's Mars is only now being recognized for its classic nature as well. I'll cover this in another post at some point in the future.