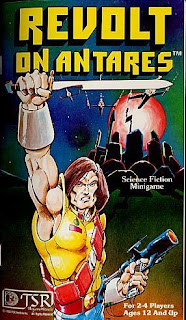 The advisor hurried through the halls of the imperial palace ever so fearful of the generals to the Emporer himself. They waited in a nearby council chamber. The very air around the place cracked with their thoughts seething in the air around the room. Near by two death bots stood at the ready. The heavy door opened on frictionless pivots & as one they looked at him. "Well !?"
The advisor went green as he gave the news, " There has been a Revolt on Antares! Imhirrhos, the ninth planet in the Antares system. But Sirs this isn't the worst of it. There are rumors that certain houses have been taken over by very powerful forces
The Iron General has been making forays into the area, Andros has been spotted on several colony worlds,Imhirros II hasn't been heard from since one of Dr. Death's zombies was spotted. & "
"Enough!" The thought projection from the Emperor silenced the entire room. "Send my forces in to stablize the systems before the arrival of the Silakkan's Fleet led by Magron. Let them fight a bit longer & then get me both Mirrhos & Ward Serpentine we shall have words after things settle. Have our forces on stand by"
Then he was gone. The men in the room were transfixed & then scrambled to carry out his orders

I was looking over using the old Revolt on Antares mini game as a possible Rpg campaign for Human Space Empires. The game was a real classic & back in the day I played this game to hell & back. There are some solid ideas in Antares. So here's the official wiki entry on Revolt of Antares.:
The action of the game takes place on Imhirrhos, the ninth planet in the Antares system. Two to four players assume the roles of leaders of different factions fighting for control of the planet as the influence of Earth's Imperial Terran Empire begins to weaken. The factions include seven different ruling families or houses, Terran Empire forces, natives, and alien Silakkans. Players can choose from one of three different game scenarios.

Each of the seven houses has a leader with varying numbers of forces to command such as Hovercrafts, Jump Troops, Laser Tanks, and Power Infantry as well as one Artifact (see below).
Here's where a dungeon master could effectively start to customize the background . Each of the houses could effectively have their citizens, soldiery, & vassals imbued with their super scientific powers. This was originally written by flintlocklaser over on Rpgnet here. Revolt on Antares thread

Each house has possession of a special alien artifact, chosen at random at the beginning of the game.

Revolt on Antares has three different game scenarios: Revolt Against Terra (the basic game), The Silakka Invasion, and Power Politics on Imirrhos.