According to Toon Tracker -
Space Angel first appeared in syndication on February 6, 1962 and production continued through 1964. The science fiction stories were serialized with five episodes comprising each adventure. Voices included Ned Lefebvre as Scott McCloud, with Margaret Kerry and Hal Smith providing other incidental voices.
The plot ran something like this :

Space Angel was the code name of Scott McCloud, an agent for the Earth Bureau of Investigation. Devoted to the security and welfare of the solar system, McCloud and his crew roamed the universe in the super-spaceship, Starduster. The crew, who made up the bureau's Interplanetary Space Force, included Taurus, an expert pilot and mechanic; Crystal, a specialist in electronics and astro-navigation; and Crystal's father, Professor Mace, head of base station Evening Star.

Space Angel was created by Dik Darley and Dick Brown of Cambria Studios, the same studio which had produced Clutch Cargo . Like Clutch Cargo, It utilized Cambria's patented Synchro-Vox technique, which superimposed live-action moving lips over the mouths of the animated characters. The animation was severely limited, consisting of panel drawings and figures animated mainly by camera movements. Among those working on the art for the series was Alex Toth, a former National Comics (DC) artist who later designed Space Ghost and most of the other Hanna-Barbera super hero cartoons, and Doug Wildey, who created Jonny Quest for Hanna-Barbera and later worked on Hanna-Barbera's animated Godzilla and DePatie-Freleng's animated Return to the Planet of the Apes. 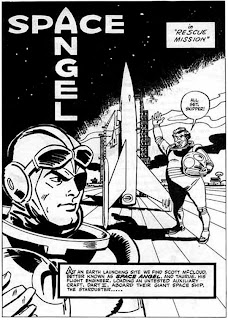 That's some group that later went on to produce some of the Saturday morning hits from the Major Networks & half of the line up on Boomerang. Cambria Studios was even more infamous for the use of real live lips to show conversation. The technique was called "Synchro-Vox" and offers up a most memorable blend of exceedingly limited live action and well crafted but exceedingly static imagery. See the link above on Clutch Cargo for more information on this technique.

Here's where things really clicked for me, when I read the wiki entry on Space Angel here: Space_Angel. I came across this little blurb about the Star Duster -
The Starduster contains a smaller vessel, a space fighter flown by Space Angel, which looks like the XF-92 and is about the same size, though with a pointed nose. It is called the "Space Dart". Where had I seen that bit before? Here in the  Space Swords & Glory Technical Manual
The idea has also been explored in Space Ghost as well. These are the perfect ships for parties. Time & again we've seen smaller ships used for all sorts of adventure ideas from exploration to fighting. Also if you look at the Plans for Space Swords & Glory  You begin to get the idea of the perfect party ship. Small, fast, light with a secondary craft aboard to take advantage of adventuring opportunities. The Star Duster is a perfect adventurer craft! Way back in Dragon we see this here.

(April 1985) Dragon #96
Why?
The answer is pretty simple really - power.An adventurer's star ship gives the players power. The power to move through your campaign universe. This can be pretty scary when you think about it. Players can pretty much go any where! Not really because of fuel costs, star port tariffs & any number of things the DM can throw at  them. Star Ships are a great plot device for getting the characters from here to there!
Links
Star Trek
Star Trek Blue Prints
starfleet-museum
Star Wars etc
.http://www.st-minutiae.com/misc/comparison/