This is my go too template when I want to design a nasty cybernetic lifeform!

Players often need that one little puts them in the frame of mind to play ! Here are a few trailers & what not that really sets the stage for my Human Space Empire game!
This is a used universe where the 1950s dream technology gave way to a Dieselpunk star wars/startrek/dune universe gone very wrong. This is the type of an Aesthetic that isn't easy to pin down but folks know when they see it. Its a sort of universe where technology is "used" a world where things look as if they've changed adventurer's hands many many times!
From wiki on Star Wars: The Star Wars world, unlike science-fiction and fantasy films that featured sleek and futuristic settings, was portrayed as dirty and grimy. Lucas' vision of a "used future" was further popularized in the science fiction-horror films Alien,[16] which was set on a dirty space freighter; Mad Max 2, which is set in a post-apocalyptic desert; and Blade Runner, which is set in a crumbling, dirty city of the future.
While the look of my universe might resemble the classic "used universe"  the ideas floating around are taken directly from Orientalism & the East!

This "star trek" steam punk communicator is really what got me off on this trainwreck of thought. Its a thing of beauty & what the characters in my game will be using!


Robots should be using swords all of the time! For no other reason that it looks great
A favorite movie of  mine is Space Hunter Adventures In The Forbidden Zone!

Its pretty much got everything you need to run a post apocalypse/Science Fiction Game!

The stereo typical "look" & plot for a space adventure should  pretty typically  be this! The plot from wiki:
t in the 22nd century, the film opens with the destruction of a space cruise liner that collides with a meteor. The only apparent survivors are three beautiful women – Nova (Cali Timmins), Reena (Aleisa Shirley), and Meagan (Deborah Pratt) – who get away in an escape pod and land on the nearest habitable planet. There, they are quickly accosted by the hostile natives and taken aboard a sail-driven vehicle resembling a pirate ship on rails.
In space, an alert goes out for the safe return of the women with a reward of 3,000 "mega-credits". A small time salvage operator named Wolff, (Peter Strauss), intercepts the message and heads to the planet. Joining him is his female engineer Chalmers, (Andrea Marcovicci), who learns the planet – called Terra XI – is a failed colony that fell victim to a deadly plague and civil warfare. Wolff risks the dangers believing the reward will solve his debt problems.
After landing on the barren world, Wolff and Chalmers set out in a 4-wheel drive vehicle called the "Scrambler". Soon, they join a battle in progress between a group of marauders (called the "Zoners") and a band of nomads (the "Scavs"). The Zoners take the women before Wolff can stop them and fly away on jet-powered hang-gliders. Wolff learns from the Scavs that the women were taken into "The Zone" which is ruled by "Overdog" – their sworn enemy. Returning to the Scrambler, Wolff finds Chalmers has been "killed". However, it is revealed she is really an android. Wolff continues on alone, but soon catches a teenage Scav named Nikki, (Molly Ringwald), trying to steal his Scrambler. She convinces Wolff that he needs a tracker if he is to survive The Zone and Wolff reluctantly takes her lead.
In the meantime, the three women are taken before "The Chemist", (Hrant Alianak), the chief henchman of Overdog who administers pacifying drugs to the girls and prepares them for Overdog's pleasure.
Elsewhere, Wolff and Nikki make camp, but soon come under attack by a strange plow-like vehicle. Wolff manages to disable the machine and learns the driver is a former military acquaintance of his – a soldier named Washington, (Ernie Hudson), who reveals he too has come to rescue the women. His only problem is that he crashed his ship and has no way off world. Wolff refuses to help his rival and leaves him to fend for himself.
Back in The Zone, the women are taken to see the Overdog, (Michael Ironside), who is revealed to be a hideous cyborg, almost entirely machine, with two metal claws for hands.
Still led by Nikki, Wolff gets into more predicaments – from being attacked by mutated blob-like beings, to strange mermaid-like women and their giant water dragon. He even loses his trusty Scrambler and is forced to continue on foot. Eventually, they are found by Washington and Wolff finds the situation reversed as he now begs his rival for help. Washington assists, but only if Wolff cuts him in 50/50 on the reward.
Wolff and Washington team up and sneak into Overdog's fortress where they find the Zoners entertained by captured prisoners forced to run through a deadly maze of lethal obstacles, hazards and traps. Wolff spots the women being held in a cage and forms a rescue plan, but a bored Nikki (who was left out of the rescue for her safety) decides to snoop around. She is captured and sent into the maze. Wolff spots Nikki in the maze and tries to rescue her, but she uses her prowess to reach the end where Overdog congratulates her and drags her back to his lair. There, she is hooked to a machine that slowly drains her life energy. The energy in turn recharges Overdog. Wolff comes to the rescue and jabs a sparking power cable into one of Overdog's claws. The power feedback fries Overdog and thus causes cascading blowouts throughout the entire fortress.
As the complex explodes, the three heroes, and the three rescued women, manage to get away. In the end, Wolff invites Nikki to stay with him and she agrees since they made good partners.
Go watch it for yourself Here:
Spacehunter_Adventures_in_the_Forbidden_Zone

More inspiration here from a favorite artist of mine!
Psi knife http://pinochioo-5.deviantart.com/art/Steampunk-Nouveau-custom-saber-174631938

Space Pirates should have  a nice planet of  fear & loathing to operate from! The painting below is part of the inspiration for mine.
Such as this


Primitive doesn't not mean stupid by any stretch of the imagination. The hand made tools are often some of the most creative in their execution & construction. All super science devices add + 1 to +2 when constructed of the best local materials. 100 credits or more are often used as part of the material components for such devices.

Aztec fleets have been a constant threat to the Pirate worlds as they search deeper & deeper into their space. 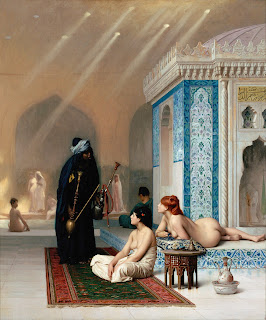 Here we have the retirement package for any self respecting space pirate!
Often the seed for any technological or political agenda begins here & ends back here