Mention comic book masters in a comic shop & the usual suspects will come up Lee,Kirby, perhaps a
Steranko, Millar, etc.
Your not likely to have heard of  the cartoonist, illustrator, comic book writer-artist and professed "Producer of Preposterous Pictures of Peculiar People who Prowl this Perplexing Planet"

Starting at age 15 Wolverton he did Mako of Mars. His work is unique & strange in the world of comics where unique & strange are common place.
Basil Wolverton's comic magazine features appeared in regular format comic books between 1938 and 1954. Space Hawk remains one of my favorites of his & the man knew how to draw some really strange aliens, monsters, & creatures! My favorite story of his remains -The Brain Bats Of Venus,

Do yourself a favor & go read the whole story over at the Gold Age Comic Book Stories Here
Everything about these things makes the Mind Flayers from D&D look like marry sunshine. 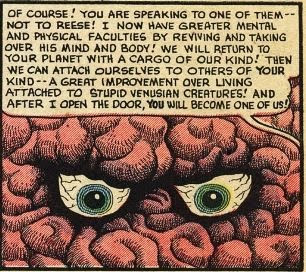 Wolverton's other creation that I love is Star Hawk.

The man was self-taught, he tried to sell his first newspaper strip at the age of 20.
The art was both controlled and organic at the same time. Aliens lived on strange worlds in dwellings that resembled nothing as much as a cross between medieval castles and Earthly observatories. The landscapes were dotted with flora that often resembled earthworms in muffs, yet the basic building blocks of alien technology were the rivet and the steel panel. What Wolverton lacked in imagination he more than made up for with enthusiasm and drawing skills.

When I first started to read the Planet Algol stuff it was Wolverton that came to my mind first! His really strange aliens, worlds, & entities are etched in my mind with 60s underground mags, & D&D!

Recently Dark Horse Comics has reprinted most of Wolverton's comics as graphic novels. These appear to be quite affordable. Wolverton Comics From Dark Horse


There is a great deal that the

Producer of Preposterous Pictures of Peculiar People who Prowl this Perplexing Planet"  Has to offer the enterprising DM. Star Hawk's adventures can easily adapted to serve as a jump off point for an entire campaign. The artist's take on undead can offer some surprises  for even the most jaded players.

The Brain Bats Of Venus

Attacks: 1
Damage: 1d8( Special See Below)
Morale:10
The Brain Bats of  Venus are named for the terraformed world of Venus Prime. This colony world fell into disuse after the Atomic Wars of long ago. The terraforming instruments continued to run. One of the horrors that was discovered years later were these interplanar horrors from the deepest depths of the inter planar Outer Darkness.
They are powerful psionics and are capable of controlling the minds of 1d6 victims per round. Their hypnotic power has a range of 30’ and the victim is permitted a save vs. psionics. Anyone failing to resist is overcome and is typically commanded to fight against his or her allies. They are even able to bring back the dead by psionically repairing the bodies of their victims. Their mind becomes a sort of  hybrid in which the Brain bat has complete access to any skills or memories the host mind had in life.
They have the following psionic abilities:
Empathy
Third Eye
Fear
Fly
Slow/Haste

The following powers may be used only when a host entity's mind is being used.
Bio PK II -used for healing the dead host
Control Machine
Telepathy
Mind flux at twice per day
These are only a small sample of some of the powers that these inter planar monsters have manifest in the past & some individuals may manifest their own set.
Fansites