History:
They have been called the "Ascended Masters", the shepherds , & countless other titles. This race of aliens has been using a protracted, breeding program upon humanity for over 6 million years. It is only when mankind has reached the stars that their influence has really been felt.  They are depicted as wise and benevolent beings concerned with the welfare of humanity. In the end they are merely another race out to exploit the genetic potential of man. They are dying & they know it! They're crafts ply the space lanes & have done battle with the Derro countless times. They've also raided several Metalunans technology troves for supplies. They've been seen among the alien quarters of several colony & pirate worlds. The  Shepherds of  Chotho-zoth are also users of the mysterious  technology of the Great Race. They have also modified themselves countless times & have become closest to humanity within the last several hundred years. They may have some hidden agenda that isn't well known. Both the Metalunans & the Zagons hunt & kill them whenever possible.


The  Shepherds of  Chotho-zoth use a wide array of super science items among their arsenals. Their craft are among some of the strangest in the universe. They rely on time engines which allow their ships to move in both time & space - sideways taking advantage of the 4th dimensional sheer. 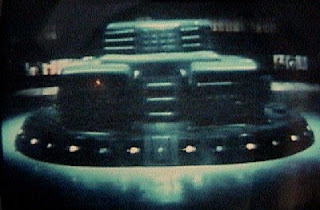 This sheer allows the ships to move quickly & efficiency along a trans-dimensional axis. The ship remains partly within the "real universe" & partially within the strange time continuum. This phantom existence is not without its problems. High yield or plasma from primitive space craft have been known to burnout these engines. The risk is considered worth it for the amazing reaction time of these craft.
Energy weaponry is also very advanced & is relatively powerful for craft of their size. These weapons are known to have a secondary disruption effect on many mythos races such as the Mi Go. Standard weaponry for the Shepherds seem to include a lightning rifle which is a variation of the ones used by the Great Race but built to the specifications of a humanoid of the race's size & strength.
The race also excels at the use of cryogenics technology & their sleeper pods are some of the most advanced preserving species for thousands of years at a time.

Biology:
The  Shepherds of  Chotho-zoth are men of a sort. The artificially genetic enhancements that they have created for their host bodies have given them some distinguishing characteristics:


The biological genome of  The  Shepherds of  Chotho-zoth is fully compatible with human beings but several psychological & mental differences also mark these alien beings as well as the physiological ones as well.