So the party pushed forward into the robot probe & went from level/ring one to the robot factory level via the elevator/ car pushing right past the artificial robot jungle level where the robotic life forms were rendered down by nanite factories into the raw materials to be used by the ship to manufacture AI controlled drones. The arrived on level three where they were greeted by a a foot ball sized factory/processing area surrounded by 13 goo in crusted pools. Each of these pools were tended by Mother Eyes See Eyes
From the ceiling trailed hundreds of hoses which fed directly into the pools from the jungle level. Here robotic animals were given AI intelligence. Earlier in the day after work I didn't have much time to write up full descriptions of  many of the robotic animals. However I remembered seeing  a random robotic generators! Here Robotmaker.pdf
After about 10 minutes I had a page full of such strange animals each with a built in surprise. The players located a holographic computer terminal which allowed them to access the ship's manifest & find out that the ship was pregnant! Fuel, the factories extra was getting ready to drop a mini ship that would produce a larger version of itself as dis assembler nanites would strip the habitable planet in the system that they just came from of all useful resources which includes the pirate's haven world they just came from!
That's when they came across the robotic monkey!  This one was very smart & after a few skill rolls plus a good kick in the rear he was able to show them down another level.
The party added themselves to the computer's crew roaster & found the crew quarters on the engineering level & a sleeping AI secondary drive system as well as the fact that the ship had been modified. The monkey displayed some very uncanny abilities by accessing the ladder down to the second level. Here the party found its next surprise in the form of a nest of robotic spiders. Large robotic spiders of the next generation that they had previously faced! They started climbing faster toward engineering &... 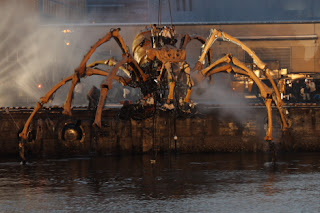