The Midderlands is a strange OSR beast, its one that has echoes in the grim fantasy of the 1st edition Warhmammer fantasy rpg but one that has its roots firmly in the OSR. Its part setting, part fantasy bestiary, and all from the twisted mind of Glynn Seal of Monkey blood design. They've got a Kickstarter going on right now & yes I know, 'Not another OSR Kickstarter'?!? Look this is from Monkey Blood Designs the guy whose doing some of the beautiful work on Astonishing Swordsmen & Sorcerers of Hyperborea second edition along with a host of top drawer OSR fantasy artists. Give this a chance folks. Its got a very TSR U.K. era feel to its DNA.


"The Midderlands is an old-school game setting with bestiary for use with old-school role-playing games. It is based on Swords & Wizardry Complete, but could easily be used with other old-school systems and even non-OSR systems such as D&D or Pathfinder.
It is a green-hued, dark-fantasy, late-middle ages, early-renaissance view through grime-smeared spectacles. The setting itself is based on an area in the middle of England near where I live called The Midlands. Many of the locations are loosely based on reality, but others are pure fantasy from an addled mind.
The setting part of the book contains something I call "game-juice". Not heavy of history and monotonous detail, but enough to get the game-juices flowing and let the game master twist and tweak as they need to in order to fit their campaign.
There is also humour and occasional swear words."

Quite frankly I've reached my OSR Kickstarter quote about three months ago. But this actually looks and sounds like a solid setting with a really good team to back the author/artist up here. The prototype book from the pictures looks great. 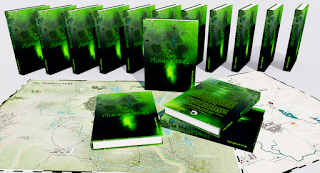 "Situated in the middle of Havenland is an area known by the ancestors as the Middle Havenlands. They don’t use that name much any more, preferring to talk lazily, and skip letters.
In strange accents, often misheard and little understood by those outside of the central region - they call it “The Midderlands”, and themselves “Midfolk” or “Midderlanders”.
There are many peculiar folk that call these Midderlands home. Generally mistrusting of outsiders, they suspiciously eye strangers, close doors, bar windows and scurry in opposite directions. Maybe the area has had a troubled history and that is why the folk behave the way they do.
All that aside, there are good folk too. These folk just want to subsist peacefully and not have interference or “goings on” in their lives. Nothing is ever that simple.
As well as the people of the area, there are the places. The towns and hamlets, the woods and hills, the lakes and the rivers. Amongst all these places are stranger locales too; circles of stones, strange towers, castles and burial grounds.
Everywhere, the Midderlands is tainted by a green-hued menace that rises from the deep and affects nature and order, sometimes subtly and sometimes catastrophically. It rises from the mysterious subterranean realm known as Middergloom. Often described as hell bathed in green fire and flames. Green-tinged slime, noxious vapours, and miasmas creep upwards, amongst them viridian-coloured demons, lime-green tentacles and other malachite horrors claw their way to the surface to wreak havoc. The Lords of the land are always working to keep things at bay. The realm of Middergloom is deliberately nebulous and mysterious, and left for you to develop as needed to suit your campaign.
The vileness that lurks below taints the skies above the land too, known as The Drab. The atmosphere is a hint of green rather than blue. The colour can shift between turquoise and sickly yellow-green in a short space of time. When night comes and the Drab clears, the midfolk can see the constellations surrounded by wispy green nebulae, strange wandering stars and comets, and a single many-cratered moon.
There are many things to keep the inquisitive minds of treasure seekers amused. There are also many things to keep the treasures where they are.
Things stir in this viridian-hued landscape. Evil eyes blink and watch. Teeth and claws scratch and sharpen. Gaping maws slobber and drool.
All is not content in the Midderlands."
The main map reminds me of the original Greyhawk campaign folio maps & there's a definite old school feel about the product. The main map looks like there's plenty of room for customization & there's lots of odds & ends that really give the setting its own unique flavor. Blow up the image of the main map to see what I mean. 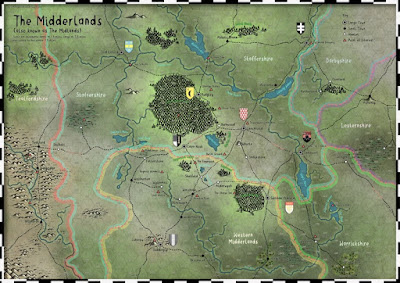 To really get a good solid overview of the feeling & ideas of the monsters, setting, artwork etc. of the Midderlands here's a flip through of Glynn Seal's art book for this project.

There are a few things that really set the Midderlands apart from other OSR settings that I've seen. I got a chance to read through the rough draft sent to me by Glynn Seal:
So what's the catch with the Midderlands book? They need support for the product. There are the usual Kickstarter risks & rewards so be aware of that before supporting. The whole thing looks fantastic & I really hope that they get the book off the ground & into the OSR wilds of the table top rpg market.

YOU CAN SUPPORT THE MIDDERLANDS BOOK ON KICKSTARTER RIGHT HERE

Please note please don't send me tons of your own OSR  kickstarter promos & such I'm doing this commentary for a friend & proven OSR writer/kickstarter. Glynn & Monkey Blood has a history on many kickstarter projects. I agreed to take a look at this and give commentary on this kickstater because I believe in the OSR project & its settings. Note that I personally have no association with this kickstarter other then being a friend & admirer of Monkey Blood's adventure design, artwork, & writing.
Posted by Needles at 7:18 AM