Many spacers & adventurers have run across the space sirens;these attractive space maidens are actually semi artificial cloned beings adapted for their planetary environments by their god. They are also highly active psychics who are able to lure many adventurers to their deaths. Amazing these women psychics have frequently appeared in the wastelands of Thule where they have adapted quite easily. These space sirens appear to be tolerated by the dragon lords of Thule and there are rumors of some connections with Thulian royal  houses. 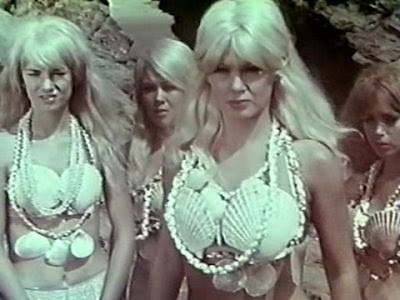 They are the sirens of space and the children of the space gods themselves. These prehistoric women have as many names as the stars in the skies above. The star sirens are a race of buxom telepathic alien cloned women humanoids who are the products of the ancient space god The Corman. They come in a wide variety of racial types often suitable to climate and conditions of the worlds chosen for them by their god. The space sirens are most often seen on idyllic paradise planets where they spend their afternoons worshiping and engaging barbaric space rites to the war avatar of their space god 'The Corman'. Each new piece of technology or relic encountered by the space sirens is quickly adapted into their weird religious outlook as an aspect of their god. 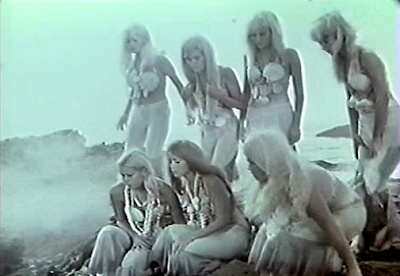 The space sirens all share a cosmic telepathic hive mind that allows the race to share in &  indulge in a group consciousness. They are able to learn as well as  access knowledge quickly & easily allowing the space sirens to adapt to changing conditions that they often find within the interstellar universe. They act individuality as agents of  'the Corman' moving throughout space & time for its greater glory and its mysterious agenda. Many have become infamous spacers and famous adventurers in their own right crewing star ships and pirating across the space ways in the name of their god. 'The Corman' often takes the form of a burnt out robotic or cybernetic life form. It often appears to the space sirens in dream sequences or other reality altering scenes.

Many space sirens serve aboard Alpha Blue for their own mysterious reasons and there are often 1d100 aboard the station serving in many capacities. Any births resulting from sleeping with a space siren has a 99.9 percent of producing another space siren. Praise be 'The Corman'.

Siren's Song - The ladies are able to create a weird alien song that telepathically lulls targets into a calm state and lures the targets to places where they want them. Often this song is same as certain space grocery chains or gambling dens. Targets must resist this telepathic lure or head straight for the siren's position.


Telepathic F$%#ery - The space siren sends out a telepathic message of weirdness & total alien confusion. Targets will be stunned for two rounds

Summon Rock - The space siren is able to summon a rock from the planet of their origin and use it as a +2 attack against a target. This is often done as an attack of last resort.

Breath of the Sisters - The Siren is able to adapt & breath underwater or in adverse conditions on a roll of 1d6 often this is to conditions that might otherwise kill an ordinary human being.

Hot Outfit Of Desire - The space siren is able to summon a matching set of perfectly clean sexy outfits from other dimensional space three times per day.

Hot Healing Sexy Time - A sex act with a space siren is able to heal almost any damage that a PC has making them one of the most sought after races to have relations with. 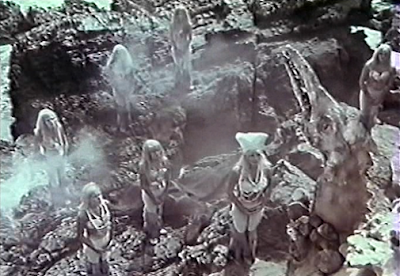 Special Attacks :
Siren's Song - A telepathic charm person attack that lasts for 1d6 rounds unless the target makes his save vs wands

Telepathic F$%#ery - The target is hit with waves of confusion and telepathic weirdness, they must save vs spells or be stunned for 1d6 rounds

Breath of the Sisters - Once per day the Siren is able to adapt to adverse planetary or elemental conditions by the grace of their god.

Hot Outfit Of Desire - The space siren is able to summon a matching set of perfectly clean sexy outfits from other dimensional space three times per day.


Hot Healing Sexy Time- Copulation with a space siren acts as a cure heavy wounds spell, this ability can only be used three times per day.

This faction is from the schlock public domain  classic The Voyage To The Planet Of Prehistoric Women!
Posted by Needles at 10:09 AM