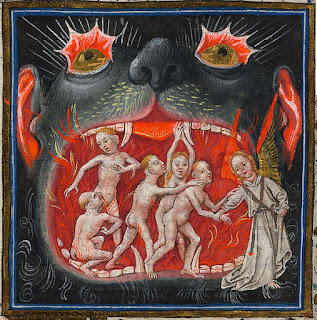 Hell makes pacts with anyone willing to further its cause bring the ticking clock closer to the time of Judgement day so it has been on all planes since the beginning of time. When a world passes into the grip of Chaos then do the drums of Admodeus court begin to sound. The dull beating & throbbing of damnation against the back point of reality. The Caeglilkaka are giant devils of almost giant ghostly appearance. They are the soul drummers who act as Hell's bards to count, collect and  absorb the damned souls on their way to their final rewards.
Adventurers often run into these devils upon planes where the world has passed on and they come to collect the souls of the damned. The Caeglilkaka are also devils who will often make pacts with evil diabolists & cults for kingdoms of the damned or Earthly infernal domains to rule in the ruins of the wastes of former strong holds of Law. They also delight in tormenting those who serve law. 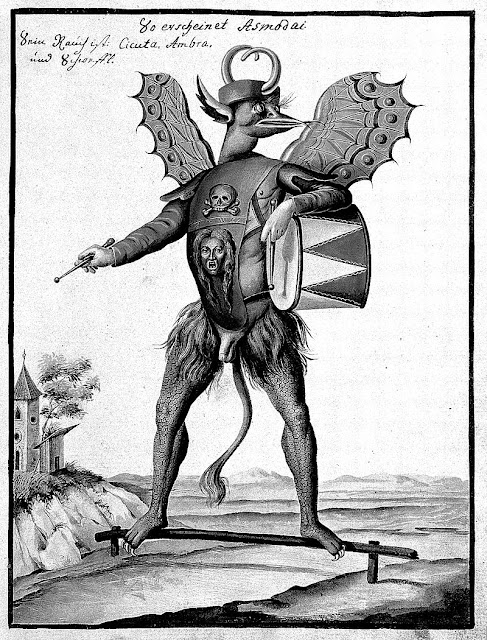 The Caeglilkaka have the strength and baring of Hill giants with the temperament of a twisted lawyer or scholar combined with a musician. They are often accompanied by bands of minor devil kind or 1d10 parade of the damned baring musical instruments. Bearded or horned devil wranglers often bring up the rear of such groups. The Caeglilkaka keeps a constant rhyme on its drum of the damned for each soul it collects and keeps count of. Each of the drum sticks is a +6 weapon capable of damaging ghosts, spirits, and creatures normally immune to normal weapons.  Both of its hands and feet have wicked claws capable of spitting soft metal or bone with easy. It uses these to rake targets for 7-12 /7-12 points of damage.
Upon these beings chest is a skull that once per hour is able to cast a symbol of hopelessness and below it is the face of slain minor angel capable of acting as a symbol of insanity.
This being's razor sharp wings are capable of slicing a man in half and work as +3 weapons and once per hour these wings can casting a hypnotic pattern like spell effect. The Caeglilkaka is also able to gate in another of their kind twice per day if a particularly difficult soul to collect is around. They have a stinger concealed in their tails, they have fast acting sleep poison capable of acting just like a sleep spell. They are able to shrug off most spells below third or better levels with a successful save. The Caeglilkaka are often found prowling the Astral & Outer Darkness they often hunt down stray ghosts & the spirits of the newly dead.
At will one of the following powers can be used by the Caeglilkaka  during a melee round: comprehend languages, detect invisibility, detect magic, ESP, invisibility, levitate, polymorph self, and read technology or magic.In addition the Caeglilkaka has a breath weapon of hell fire usable three times per day that is able to be projected in a fifty foot long cone of infernal fire capable of doing 1d8+6 points of damage. Once per week the Caeglilkaka is able to call in a minor avatar of death to escort the damned down to their final reward. 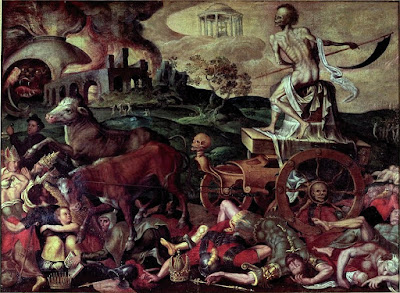 The Caeglilkaka are often called to the plane Prime for the express purpose of pin pointing a time and place for the Apocalypse to begin. Since they are the lore masters and bards of Hell they are also summoned to learn the secrets of the damned. They are master gossips and collect the stories of the damned. From secret treasure stashes to the last will & testament of forgotten kings these devils have a vast memory of ancient and long forgotten detailed stories of tragic legends and epic ballads ready at a moment's notice.
Call The The Caeglilkaka
Conjuration- Summoning
Level: 7 wizard or 8nd level cleric


To call the Caeglilkaka, the caster must have 1d20 acolytes accompanying him for this rite. The caster must have five thousand gold pieces worth of secret governmental or military documents. These must be burned in an inverted circle of summoning while intoning the words of power. A shaft into Hell will open at the caster's feet and a hell mouth will appear after the rite
the Caeglilkaka will step forward demanding who called them. They will demand a 2000 gold piece magic item and the caster must provide this minor demand or be dragged off to Hell themselves. They are almost always summoned to give advice on the stories of the damned, to tell the time and place for the coming Apocalypse and for advice in matters of the damned such as necromancy.   These are beings not to be trifled with.
Posted by Needles at 7:28 PM