At every level of society the influence of chaos can be felt & the impact of cults of dark chaos worshipers should not be under estimated by players & their PC's. 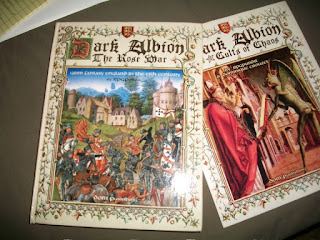 I've been a fan of Dark Albion since its come out & its a brilliant setting with lots of potential for OSR play & its a book that I've lately been reading & rereading due to my own writing & campaign design work. Now for the past month I've been waiting for a friend of mine's video review of Cults of Chaos the Chaos add on book for Dark Albion. He's been slowly building up to it, with Youtube video reviews of Fantastic Heroes & Witchery as well as the Dark Albion setting book.

Finally his video of Cults of Chaos landed last night and it was worth the wait.

There are some really important points that Brandon makes here and one that has an impact across the board when it comes both Dark Albion & the Cults of Chaos book. The fact is that because of the chaos of the Rose War cults of chaos operate at every level of social strait in the setting. The Dark Albion Cults of Chaos book has at its core this fact and the spokes of chaos in the setting are intimately tied to this fact. Why this is important is really the heart & soul of the book itself. Cults of Chaos isn't merely another monster book  (well in some respects it is) but because it has a ton of potential adversaries in it in the form of cult NPC's. These NPC cults are the machinery that spreads the rot and weirdness of chaos throughout Dark Albion because of the social levels of society. Each and every level of society in Dark Albion has the potential to have its own cult waiting and operating in the wings of the setting. This goes back to magic in Dark Albion being intimately tied in with chaos & there's no escaping that fact. Unlike Warhammer fantasy where chaos is an explosive force of change, mutation, etc. in Dark Albion chaos is a slowly rotting and dangerous force of horror.  A slow rot that is actually the many headed hydra devouring the setting with its own tail. 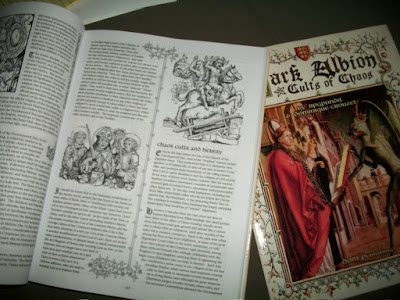 This basically means that in alternative historical terms its far closer to the rot that was created by the supposed witchcraft & black magick scares of history then the magic of Dungeons & Dragons. Because its tied to chaos the rot is there for any magicians and even priests of the unconquered sun if they're not careful. This treads quite closely to the second edition D&D era's take on both Ravenloft and Ravenloft's Red Death world setting material. This also creates lots & lots of potential for dark investigation adventures and potential horror of chaos worshipers at the edges of civilization. The potential for the application of this material in other OSR retroclone systems & materials is huge. And no I'm not blowing this out of proportion. 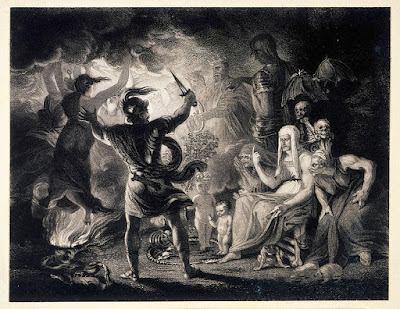 Cults of Chaos at its heart & soul has been created to do one thing & to do it well. That is to create, generate, maintain, group together a cult of incredibly dangerous NPC's into your games. These guidelines because of the social ranking rules & background material could be used in a wide variety of OSR & retroclone games. 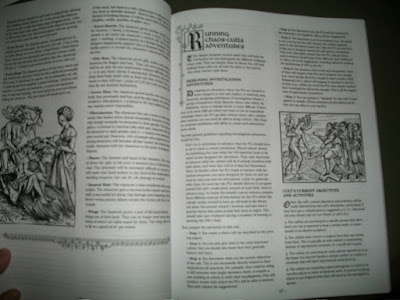 For example in the wilds of Lamentations of the Flame Princess setting of Better Than Any Man adventure is set in the northern reaches of the Holy Roman Empire (Germany) during the Thirty Years War. This was a particularly brutal time in Europe, as just about every major national power got involved in the fighting. Cults of Chaos can help fill the gap for generating a wide variety of demonic & chaotic horrors quite easily by attaching them to a wide variety of nefarious cults of chaos. For gritty sword & sorcery games such as Astonishing Swordsmen and Sorcerers of Hyperborea both Dark Albion & Cults of Chaos could be used to generate an incredible amount of NPC's and cults where society hasn't quite broken down. The rules are easily translated.
Mutant Future or any old school or post apocalyptic game can benefit from using the models presented in both Dark Albion and Cults of Chaos. The Realms of Crawling Chaos book's material is perfect as an addition onto these book's material. For that matter Star Ships and Space Men second addition could be grafted onto Dark Albion to create an alternative Earth where the Rose War has taken a completely different route. For a completely different twist on this material we could look to the Hydra Cooperative's Trey Causey whose Weird Adventure setting book with its pseudo pulp City and heroes might be perfect for the dark powers of Dark Albion. The powers of chaos simply another horror added into the laundry list of weirdness that is corrupting the city from within and subverting each & every level of society and its fringes.
These are simply some of the examples of OSR style applications for both Dark Albion & the Dark Albion Cults of Chaos book.
There are literally hundreds of uses for these books if A.you as the DM are willing to invest the time and effort into them & B. You've got players who are willing to give you the room to show just how weird this material can be with the application of some imagination. Do I think they're worth getting and using? Hell yes I do and we should be seeing the Dark Albion Cults of Chaos book soon.
Posted by Needles at 9:09 AM