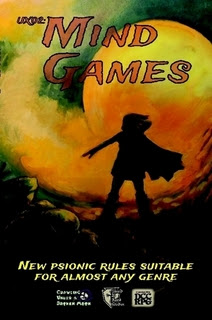 So does this sixty nine page psionics add on bring anything new to the table for DCC and Crawling Under A Broken Moon? Yes in some fashion it does; what Mind Games does is brings to the table the no nonsense and no bull psionics and stripes it down to its bare essentials and into a playable DCC format. The book states right out front what it does:
So right off the bat we get introduced to the Psion class for DCC which is a re working of the D20 psionic class into the arena of DCC now this may sound like a bad thing but it isn't. First of all its reworking of the class from the ground up & brings it far closer to the DCC aesthetic then the 3.5 class. This is a careful balancing act here and the Shield of Faith crew does a nice job. It doesn't feel rushed or shoehorned into the Crawling setting, it actually fits the 'Merica setting.
We get a revamped psionic system and once again its been streamlined into the DCC system and that's a good thing. We get a stripped down and well thought out psionic system including dueling and all kinds of nifty little bits and pieces.


Psionics here is compartmentalized and works well for what the designers were trying to do. Take a workable psionic system and fit it into the world of Crawling Under A Broken Moon. I think they've succeeded on that end. The work here is far leaner and meaner then I've seen it before. This is a book that is begging to be used. The production here is very well done and the psionics are solidly done. There are thus the usual DCC random psionic effects and backlashes and all kinds of weird bits for PC's that dungeon masters are going to love!  This piece of artwork cracked me up because just last week this happened! There are ton of psionic systems and stuff here that work in equal measure of good, weird, and why didn't I think of that.


Anyhow rounding out this book we start to get into psionic items & monsters. These are some vicious DCC game elements let me tell you. First of there is living crystal weapons for the game these are 'intelligent swords & items' for psions with all of the DCC goodness and complications that go with them. They can be really nasty & dangerous.
Next up is Psy- Baubles which are floating and weird psionic items that are sort of like Ioun stones but are for psions. They have some really interesting properties but can crack & break! Because of the rarity of these items its a bit of trade off. Brow Jewels are another psionic crystal item that lowers the DC for PC and adhere to the foreheads of their owners. They have all kinds of nifty little effects & tricks.
Memory tomes are psionic virtual reality devices that allow the psion to experience pre holocaust memories and enhancements. They function like Jedi Holocrons for psions and allow all kinds of mayhem to be added into an adventure especially with psions.
Finally we get into a whole bunch of nasty psionic monsters straight out of a 'B' science fantasy movie director's day dreams. Things like the Braingineer a brain in jar robot but from another timeline and world, they're completely alien and very Lovecraftian.


Cerebears are incredibly dangerous monsters with an exposed brain and lots of flying eyeballs around them. They're intelligent and very dangerous psionic monsters capable of wiping out an entire party of adventurers on their own.
There also the Edacious Encephalons which are hungry brain devils, life forms in search of tasty emotions and capable of torturing psions and all kinds of possibilities for adventure game mayhem with this monster. An emotional psion parasite with stalker overtones and a vindictive streak a mile wide. Fun monster to torture PC's with.
The Hive Mind is an alien psionic into itself weird, strange,and pissed off. Made up of swarms of spiders or insect  serpents or other wasteland creatures this being is a weird combination of psion and a swarm of monsters. They are true sociopathic personalities with all of the failings and advantages of them and they're completely dangerous to PC's. A perfect urban or rural monster to throw into the mix.  Finally we get the Lobstrosityrant which is the central tier leader of a hive of Lobstrosity and are one of the more colorful and weird potential NPC monsters of the book. They've got personalities, hold conversations with waste landers and are generally easily offended. So bring them treated lumber as an offering in their hives. These guys have the potential to be some bad ass NPC's or perhaps friends to PC's. And then finally we get a table of psi beast complications and attacks and that brings Mind Games to a close. This is a solid system built upon the OGL D20 psionics system but adapted and spun for DCC and the Crawling Under A Broken Moon setting. Does this mean that this is a rehash of material that we've seen a million times back in the D20 days? Umm no its a brand new systems  with new monsters, weird items, and plenty of back beat systems material that can  be used with any DCC setting or game. This is a four out of five book and easily worth your time, energy, and coin folks.

New comments are not allowed.