There are adventures and then there's the challenge of I12 Egg of The Phoenix. Welcome back dear readers to another installment of the retro review. This time we're taking a look at Frank Mentzer's Egg of the Phoenix adventure. This module has  editing by Paul Jaquays  and a nifty cover by   Keith Parkinson. 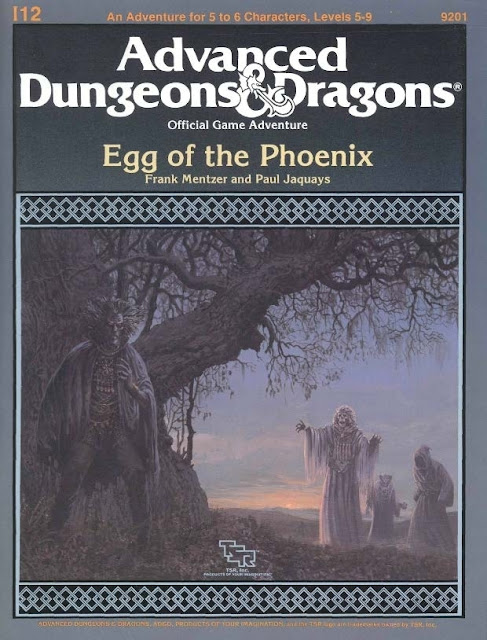 ""Come on," they said. "It won't be so tough, just stopping a slavery ring," they said.
"I don't know," you said. "Those slaves aren't even entirely human! How do we know they won't try to kill us?"

But you went, and now you're having second thoughts. There were the thieves in the lost crypts of Empyrea, raising hundreds of—no, that's too disturbing to think about. There were the three dragons who—no, that's too painful to remember too. Now there's this egg of the Phoenix. What does that have to do with anything? This was supposed to be a cut-and-dried stop-the-slavers job. Who said anything about retrieving lost artifacts?

Trudging through forest, traipsing through castles, trotting through dungeons, traveling through other planes: this has turned into more than your run-of-the-mill adventure. The compensation had better be worth it! Provided, of course, you're around at the end to collect your share."
One of the things that you'd often find with the various monsters, demons, and creatures of the Fiend Folio is how dungeon masters would customize them for their own campaigns.Here we see Frank Mentzer doing exactly that taking some of the lesser known deities and turning them into major campaign adventure forces. Egg of the phoenix contains some major bits of AD&D adventuring. This includes the following according to Wiki;"The module includes dungeons, wilderness adventures, time travel, and extraplanar journeys." 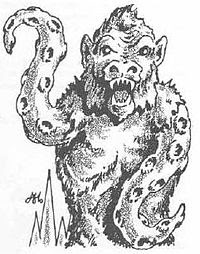 Egg of the Phoenix has a lot going for it including expansion of the world of Greyhawk where the action takes place in the Union of New Empyrean. This was drawn directly out of Frank Mentzer's Aquaria campaign which was supposed to become a part of Oerth but that never happened because of some of the behind the scenes political upheavals at TSR. Too bad it would have been fun to see where they would have taken Grayhawk. That being said there is a ton of stuff to mine here for a dungeon master especially for Astonishing Swordsmen and Sorcerers of Hyperborea. There are four major dungeons and you get the range  of dungeon material from includes caves, fanes, and other planar activity. There are outside adventure, a village, and some other adventure set pieces. With a lot of tweaking and modification this adventure could be used as a set piece for a Dark Albion or a high level Lamentations of the Flame Princess mini campaign. But it would take a ton of work to modify the setting, the background, and drop out some of the humanoid elements of the adventure. The action would have to take place in a European backdrop and so once again I'm thinking Spain or the surrounding countries. This module could with a bit of work have a grind house or horror campaign theme, heck the entire module could form the backbone of a well done horror campaign given the natures of the evil 'Elemental Princes'. 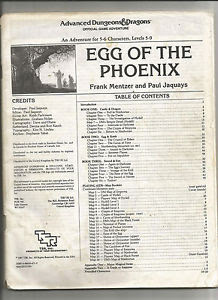 There are some truly interesting things to note about this module, the first is the fact that this is a dangerous module and should be with mid level experienced players. The Drivethrurpg scan has some issues. "The new scan is missing the 20-page Playing Aids booklet which contains the six pre-generated PCs and all the maps except for DM Map I (on the inner cover) and Players' Map XXIII (on the outer cover)" was one of the complaints according to Doug B and that was from two years ago. Hence why I'm not including a link, I own this module in the flesh and its a difficult one on PC's. Its a great module for what it does and it delivers the goods when it comes to play with the right group of players. 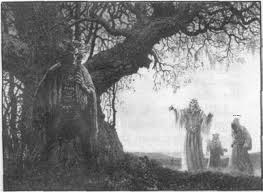 The original module was very different though according to wiki;"R-3 The Egg of the Phoenix was written by Frank Mentzer, with art by Bob Walters, and published by TSR/RPGA in 1982 as a 16-page booklet with an outer folder.[1] The module was a limited edition, sold only to members of the RPGA.[1] It was later rewritten, and collected with the other modules from the R-series in I12 Egg of the Phoenix." 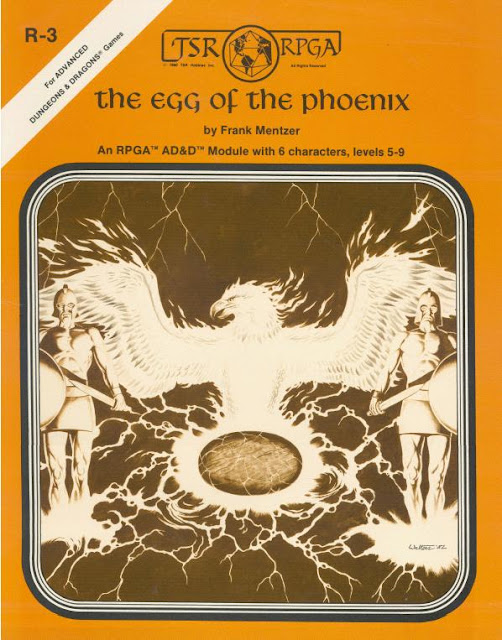 I12 comes from a vastly different time in table top role playing then OSR modules, the play has a different style. The feel of Egg of the Phoenix is on par with convention play from that time period and the energies of the module speak from Eight Seven entry point in Advanced Dungeons & Dragons game history. That being said there is still lots of interesting bits, pieces, and tools that can be pulled and mined for other campaigns including your own. 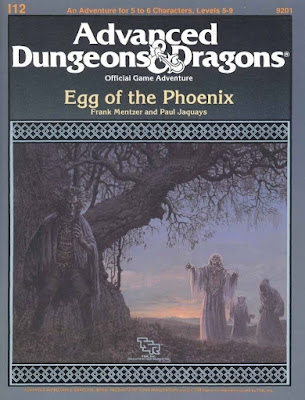 If the D&D classics or Drivethrurpg people would get their act together and correct the pdf's this is a great module to own and solidly entertaining to run with the right group of players. It puts the evil elemental princes front and center as the vile villains they were always meant to be. There's a ton of resources and old school '87 dungeon goodness to mine from. Egg of the Phoenix isn't that well known today among players and only a few collectors even speak about it from time to time. This makes this a perfect adventure module to play around with and dust off for a snowed in weekend of old school play.
Posted by Needles at 7:51 AM