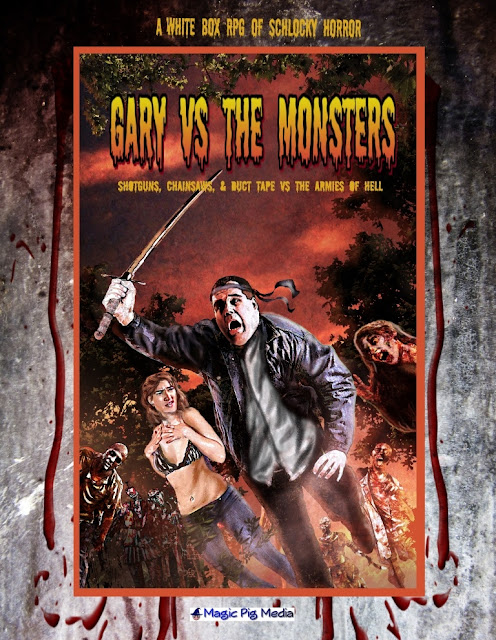 Alright so apparently I can't get away with a taking two steps and then Magic Pig Media has something new and cool to take a look at. Here's the low down on Gary Vs The Monsters this is a role playing game based off the Swords & Wizardry retroclone brand label. It features the premise that many VHS series horror films that came out in the Eighties featured namely the idea that some nasty undead or supernatural horror is going to try to your PC's face off. You and your party are all that holds back the night. I know the author and have gotten used to his awesomely warped sense of humor. The lowdown for this game goes something like this:

"This ain't about brooding vampires, misunderstood werewolves, or repentant demons.  This is about monsters that want to drink your blood, rip off your face, and eat your soul. The only thing that stands between the world and the Armies of Hell is you and your vast experience in the fast food industry. That plus a chainsaw, a shotgun, a six pack of brews, and some duct tape.Includes four classes: The Survivor, The Normal, The Mystic, and the Psychic. Random Starting Equipment Tables.  Plus classic campy horror movie monsters and more."Gary vs The Monsters is an old school campy cinematic horror RPG based around the White Box rules of that most popular fantasy roleplaying game."

This book manages to in sixty four pages add in a whole bunch of content and it is very well put together but I have reservations about the game. This retroclone game touches on some very specific areas of horror for me, I worked in a video rental shop and continue to enjoy the particular eras of horror that the Gary vs The Monsters  uses for source material namely the Seventies,  Eighties and Nineties horror films and literature. And this retroclone doesn't feel like a complete game to me; there are certain conceals that the DM is supposed to make with the system straight out of the gate. GvM uses several weird system conventions straight out the gate; GvM uses Saving Throws as Skill Checks, experienced players will notice that the classes do not have any Attack Bonus listed. "There are no weapon and armor proficiencies. All player characters may use any weapon or armor." "Speaking of armor. It doesn't make that much of a difference. Any armor gives -2[+2] bonus. It doesn’t matter if it's a Kevlar vest, something picked up at the Renaissance Faire, or a cookie sheet duct taped to your chest. But characters do get better at avoiding monsters as they progress in levels."  Basically these rules are in play to help augment the 'anyone can die at anytime' style of horror play that one finds in  horror films. The system seems to be another effort to streamline the OD&D system and mainline it into a schlocky horror system which works for this game, this is a beer and pretzel comedic horror rpg  game. This game is a fine effort to create a workable system for use with Swords and Wizardry but you really are going to need that system to get the most out of this retroclone. There is more then enough to get a convention style for a night's entertainment with a group of players but this game lacks a bit in the PC support area. You've got the survivor class Survivor: "A rough and tumble character who managed to survive messing it up against the forces of darkness. Survivors are tough and they learn quickly how to avoid getting killed" Basically a fighter variate whose survived their brush with horror and now wants to kick ass and take names. The normal guy or gal who wants a life but ends up in the middle of horror situation;"A character with no special abilities other than luck but sometimes that's enough. Most Normals want to go to a regular 9-to-5 life but fate has other plans. They always seem to end up in the middle of some supernatural dust up."
Then we've got a wizard under guise of mystic; "Mystic: Mystics know a few supernatural tricks to help even up the fight against evil. Mystics aren't the toughest nor the luckiest characters of the bunch but their knowledge and magical skills prove to be invaluable when facing the forces of darkness." Basically your regular Sword and Wizardry mage or wizard whose been ported over to this comedy/supernatural retroclone. A better choice for this character and this system might have been a spell point system for Gary Vs The Monsters. A friend pointed this out earlier today as I was reading this pdf. I was expecting a bit better from this pdf  but the psychic looks to be PC class  ported over from a D20 OGL site.
Alright with all of that said there's a lot that can be used here the use of saving throw as skill system is interesting and has a variety of uses in many instances;"Saving Throws are what your character uses to resist all sorts of bad things. Be it poison, disease, mind control, and various other types effects that aren't exactly an attack but still can do damage or otherwise hinder a character. To make a Saving Throw simply roll 1d20. A character's class may provide a modifier as well as the Attribute Modifiers of the character. If the total of the roll is greater than the character’s Saving Throw number (on the Class Charts) then it was successful.
GvM uses the Saving Throws as a Skill mechanic. Or to put it another way, if the player wants his character to attempt something so the player rolls a Saving Throw. The GM may allow the roll to be modified by one of the character's Ability Score Modifiers, Class, and/or Day Job. It's that simple."  This works as a fast and quick remedy for the spur of the moment decisions and skill situations that one finds in horror films.  The brush with the supernatural table is cool to add a bit more background to your PC's. The insanity rules are particularly interesting but look to have been ported over from other Swords and Wizardry products. Choosing equipment is supposed to emulate the horror movie theme of grab whatever is on hand and use the Chinese menu of choose from column A and column B approach; "Rolling Random Starting Equipment: Instead spending time shopping, starting characters begin
with some random equipment. •Table A (Roll 3 times): These are items that could be very useful with a little creativity and
imagination.•Table B (Roll 2 times):
These are obviously useful in some way.•Table C (Roll Once):
Weapons.•Table D:
Really good weapons. Only roll if you get the result on Table C."

The tables are alright but really need to expanded some and there is a ton of material that could have been added into this section. This is one area that needs a bit more expansion.  The ritual section takes the conceits and random rolls to create magical spells that anyone can use. There isn't a single ritual example in this section only a bunch of random tables to create your own and to me this is one of the weakest areas of this retroclone. Here's the perfect place to create a band new marketing statement and OSR new material for Gary Vs The Monsters. I'm sure we'll be seeing a new resource book soon.
This is followed by relics and you get a total of nine magical relics including Magic Pig Media's version of Necronomicon Ex Dementia. Here's another section that should have been expanded upon with something like fifteen or so relics. The Dungeons and Dragons OGL is peppered with a myriad of magic items and relics these are easily modified for a  horror game such as Gary Vs The Monsters. The author should have gone back to these. Sorry but this section needed work. The insanity rules are something that works very well in Gary Vs the Monsters though. The monster section is one of the strongest places in the game you get a total of twenty seven of the most popular horror monster types available. These are strong and very well thought out and its really the horror movie monsters that this game is really about.
That leads straight into the six page adventure called Night of the Living Shoppers, a nasty little affair that takes place in a mall ala Dawn of the Dead and there are even several pre generated PC's to play here. They even include Gary in there. This brings me to the character sheet which should have been a bit well better graphically. The artwork in Gary Vs the Monsters is by some of my favorite fantasy and OSR  artists including:
Tamas Baranya
Peter Szabo Gabor
Jeshields
HermaDolph
Bradley K McDevitt
Widodo Pangarso
Nolan Segrest
Sade
So with all of those areas of what seem like problems and issues do I think this is a bad or usable game nope not at all. Gary Vs The Monsters does exactly what it says on the tin and proves a comedic horror rpg done in the old school tradition. This is a game for a quick weekend pick up adventure done with friends and horror fans. I think that for six dollars you get a complete and workable system that with a bit of work could be a great alternative Swords and Wizardry system. Four out of five stars for Gary Vs The Monsters.
Posted by Needles at 2:10 PM