When it comes to B2 Keep On The Borderlands I've been doing a lot of thinking about how its application can not only kick off a campaign but foreshadow future events within a campaign. The plot twists are really the key here;" Plot twists include a treacherous priest within the keep, hungry lizardmen in a nearby swamp, and a mad hermit in the wilderness." These four all can be used to branch off into other directions that can easily foreshadow several major classic Dungeon & Dragons B/X classics including: Village of Hommlet, The Temple of Elemental Evil, I2 Tomb of the Lizard King & many others. 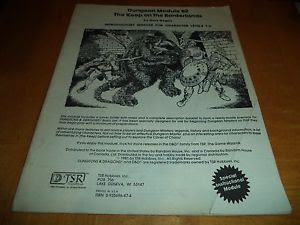 The wilderness of I2 Tomb of the Lizard King could be connected to the trackless wastes around The Keep from B2 and made to be a series of forts along the borderlands of some sword & sorcery nation ala Greyhawk. There's again that echo of  Robert Howard's Beyond The Black River or Konrad's Heart of Darkness.
But there's more to this ideas then simply that, there's the fact that the threat of the resurrection of the elemental evil's cult has been on going for centuries & that its evil is present, real, and growing within the campaign. The Keep presents the opportunity to introduce throw away NPC's who can become major players later on in the campaign. There's an almost Lovecraftian feel to even the basic monsters of D&D, this is something that I've exploited. The Lizard men of D&D have changed & grown in scope over the years;
"The lizard man was introduced to the game in its first supplement, Greyhawk (1975). It is described as an aquatic monster with a rude intelligence, that is fond of eating human flesh." This ports right into the idea that;"
The lizard man appears in the first edition Monster Manual (1977), where it is described as a semi-aquatic creature that dwells underwater, and is omnivorous but prefers human flesh.[3]
The lizard king, a more intelligent and evil relative to the more common lizard man, was introduced in the Fiend Folio (1981)"
Which can be one of the signs of the growing evil of the elemental cults as the Lizard Kings begin to rouse they're armies of reptile warriors as the egg vats of old begin hatching their charges out into the world. 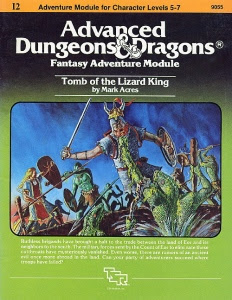 All of this can hinge right back into the Village of Hommlet where the evil's minions are sewing the seeds of despair and horror right under the very noses of the locals. The thing about both the keep and the village is the fact that both of these can be used to represent an old order of military that has faded with time and its glory eroded. The PC's are key here to restoring and creating a new order to take over the charges of the past.  The village of Hommlet and the keep should both be parts of the growing domain of the PC's. This something I've seen used in both Adventurer, Conqueror, King & Astonishing Swordsmen & Sorcerers of Hyperborea games that I've run and played in as well as both AD&D 1st edition & B/X D&D.

This sort of bridging  of  modules gives a sense of cohesion in old school play and proves the PC's with both a safe haven and grounds to adventure from. This is something that is very important in old school play & yet seems to get seldom mentioned today. That being said its not that hard to imagine that there is a festering evil or two in the form of nearby dungeons.
Posted by Needles at 11:30 AM