Today has been one of those days where I've had to put the hammer down on social media & pick up the keyboard this evening to get through the other half of my day. Work has been keeping me hopping & I've had to put in a bunch of bench time to make up the difference. I spoke with a very nice young lady today from my home who informed me that there were a number of cos-players & a healthy nerd community in Torrington. I sketched out my plan for the hobby shop event & when its happening on the Fifteenth of this coming month. So fingers crossed I'm going to be bringing back a convention style adventure set up using Keep of the Borderlands with Astonishing Swordsmen & Sorcerers of Hyperborea. Which brings me to the latest free past download of  "&" magazine issue number eleven. This issue concentrates on using the humanoid races of Advanced Dungeons & Dragons to better effect at the table. It basically builds on the traditional tropes associated with D&D humanoid monsters & then breaks them or uses them to warp the traditional hide bound view point in surprising ways. 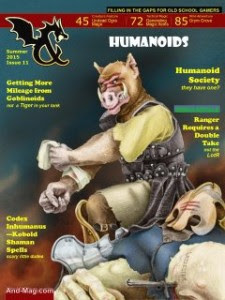 Getting More Mileage from Goblinoids, by Bryan Fazekas is a great article on using humanoids in Advanced Dungeons & Dragons first edition games. The author goes through the facts within the game & then mines them for turning the humanoid races into actual challenging and dangerous foes for the PC's very good stuff. All of the humanoid monsters are covered from Gnolls to Orcs and all of the major monster races are covered.
Humanoid Society, by Lenard Lakofka  turns in and builds on the previous article for societal construction for campaigns and has a good twist on actually using the alignment system to the DM's advantage for monster design.
Points of View?, by Michael Corrinet - This is a rather useful article on the monster race's racial view of humans and provides both flavor & fodder to use and flesh out certain aspects of an adventure with far more detail.
Reviving the Lowly Orc: Two Variants, by Tom Pamperin details to orc variants of forces including the The Blaedigg-Tok, AKA Bloodcap Orcs, are a very nasty kind of orcish Special Forces. And the a few are chosen to become something much worse: Saalbund orcs, AKA Soul-Bound orcs. The Saalbunden (soul binding) ritual binds a group of three to six Bloodcap warriors into an unholy brotherhood fanatically dedicated to serving the tribe. Both of these make the traditional orc into something more military and wholly dangerous to any adventuring party.
The Ranger Requires a Double Take, by William Doc McDonald this article takes the ranger and turns the PC class into a force to be reconned with;"This article takes another look at the Ranger class, a version without spell ability. The ranger's ability to cast spells is so delayed that it is no real advantage to the class for most campaigns. Instead, new skills are added at more appropriate levels to reflect the ranger's continued
increase in awareness and ties to the natural world." This makes a certain amount of sense given this issue of '&'s contents.
The Extended Family of Sphinxes, by David A. Hill this takes the Spyhinx species and customizes them for the AD&D first edition table top. A very good article for DM's but not for the players! There is some serious stuff here.
& Musings, by Bryan Fazekas. An editorial with some bite for AD&D
Creature Feature I: Ecology of the Ogre Mage, by Bryan Fazekas - This article turns  the Ogre Mage into a far more dangerous creature then we were ever lead to believe.
Creature Feature II: Undead Ogre Magi, by Dan Rasaiah This article continues the first ecology article and then turns it on its ear with the undeath making  the Ogre Mage into a monster of myth and nightmare.
Friend or Foe: The Ogre Berserker Company, by Bryan Fazekas Ogres are a nightmare to begin with but now give them organization and the abilities of a berserk & add in dash of undeath.
The Toybox: Leomund's Long Coats, by Lenard Lakofka  Finally a bit of protection for the PC's with a twist.
Spell Caster's Paradise I: Codex Inhumanus – Kobold Shaman Spells, by Dan Rasaiah Turning the Kobold shaman into a player's party worst enemy.
Spell Caster's Paradise II: Leah Cim Disk of Altered Alteration, by Goblin's Henchman - This is a magic item that reenforces one of the main conceits of AD&D spell components. It gives advantages and more for the players.
Tactical Magic: Generating Magic Items and Spells for a Party, by Ian Slater, thinking tactical for the relics and magic items for a party with a different bent. There's some very well done stuff in.
BrewMaster: Games within Games, by Timothy Connolly Are you a fan of tavern games and bar games within your campaigns then this article is for you.
Mini-Adventure: Blues for the Red Sun, by Dan Rasaiah This adventure is for a party of 4 to 6 characters of 4th level. The adventure is set in the desert with a twist or two for the more experienced party of adventurers! This is a very dangerous little number to spring on the players at the table.
Mini-Adventure: Grym Grove, by Andrew Hamilton The Grym Grove is a stand of densely packed trees; the
grove has an eerie aura. An adventure with a twist of the Fairy and Fey about it and slightly more.
Hex Crawls: Two Shores and Torjetty Regions, by Andrew Hamilton - A fully detailed hex adventure encounter that your can drop into your home campaign. Well done and very detailed.
The Gaming Gourmet: Fusion Chicken, by Doug Rector What's for supper at the gaming table?! A recipe variant for your players.
For Further Reading, by Ron Redmond.. Internet resources for the OSR dungeon master whose as much into their research as their gaming! This is one of the most useful bits for me from '&' magazine to take on those players who are the so called 'experts'. You know the type.
So all in all this is a very well done issue of  '&' and there's lots of incredibly useful bits and pieces for the AD&D or OSRIC dungeon master to go to town and use. This material is actually useful for an OSR or traditional dungeon master. Some of this material could be very useful for a player who wants to add more meat for their half orc PC or their ranger character. They might want even more fodder to add that extra twist to their favorite character. But please check with your dungeon master before even attempting to introduce this material into an on going campaign. For the old school dungeon master this issue is a feast if you want to breath new life into those old orcs that jade players have gotten used to. This one has enough twists and turns to hang such a group out to to dry. Five out of five for usefulness, utility, & sheer old school inventiveness. Did I mention its free?