OSR Commentary On The Forgotten Fane of The Coiled Goddess By Joseph D. Salvador From North Wind Adventures As Old School

"More than a month ago, your party found itself in Port Zangerios, where you heard of an Esquimaux thief selling a treasure map. Low on wealth but high in courage, you sought him out. The man turned out to be a fearful ex-slave who had “acquired” the map from his Ixian master. The map is incomplete but shews the Isle of the Serpent in far-off Lemuria, where rests a fabulous treasure called the Feathered Crown of Nanasa (or so thought the Ixian). Pooling your money to purchase the unfinished map, you bought passage on an Amazonian trade ship. After passing through tempests and torrential rains that shimmered with auroral light, you have come to the great city of Jhaman Ket. Now you must seek out the location of the Isle of the Serpent." 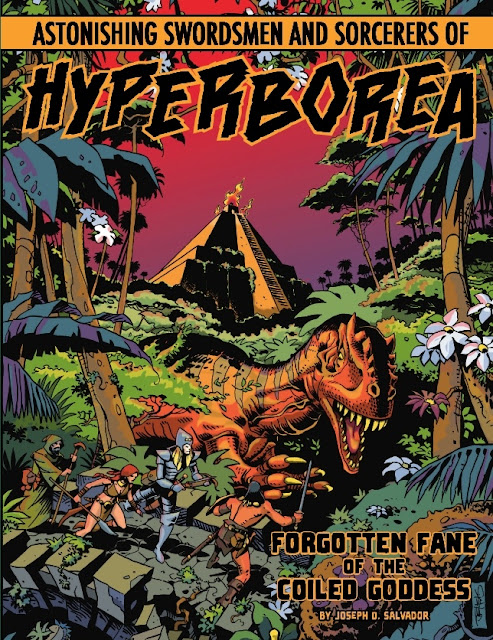 I've seen a lot of people who have spoken of using various OSR modules with other game systems then the retroclone's that they were designed for. Recently I've been touting Adventurer,Conqueror, King & really enjoying picking it apart, kicking the tires, & preparing to run an old school campaign mini event with the system. Earlier today I posted an idea of running a mixed Frankenstein OSR  post apocalyptic campaign based on an email request. Well rest assured I'm not leaving the realms of  sword & sorcery behind nor the OSR itself. As I said the other day there are as many flavors & colours of OSR gaming as their there are parts of the visible spectrum of light. Each & everyone is valid & interesting, so it got me thinking about one of my favorite mini campaign adventure resources for the Astonishing Swordsmen & Sorcerers of Hyperborea game I'm speaking of Joseph D. Salvador's Forgotten Fane Of The Coiled Goddess.
I've had it sitting on my hard drive for the better part of a year or so. Way back in October of last year I was running a few mini adventures for Astonishing Swordsmen & Sorcerers of Hyperborea. If there was one module that I think is essential to the tone & encapsulated Hyperborea as a world setting this is it. Because it expands the world of Hyperborea by adding in the remnant of Lemuria to the world setting. This does a few things in spades: 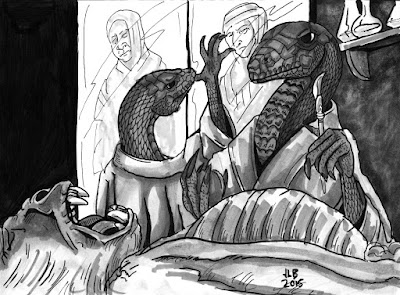 So what does this have to do with Adventurer, Conqueror, King? Quite a bit actually, if we look at the Lumeria remnant as a possible domain for the PC's to tame then this opens up just the type of a campaign that ACK's was designed to handle. The Domain's of War system is designed to handle such incursions & invasions with impunity and given the prehistoric lost world of Forgotten Fane of The Coiled Goddess this is a viable option. But your going to ruin the feel of the world of the module? Perhaps but this is the type of campaign that could take years to run.  'But this goes against the entire grain of Hyperborea' was the cry I heard today. Hyperborea is a world customized by many DM's including the creator himself.

In fact I would strongly suggesting creating your own version of Hyperborea and customizing to your own home campaigns. This is one of the beauties of this world, its flexible and so rich with sword & sorcery possibilities. 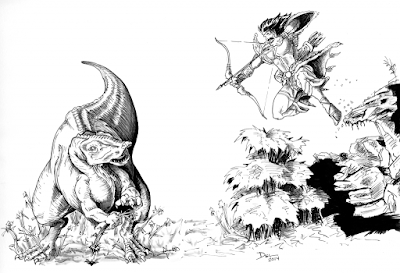 All of the heavy lifting of creating ACK's classes and adapting them to Hyperborea has been done and awaits your reading. This remains one of my favorite Astonishing Swordsmen & Sorcerers of Hyperborea adventures. There's so many possibilities & so much stuff has been packed in. The writing is compact but evocative and I keep returning to the adventure again & again to dip my quill in the rich prehistoric waters here.
The question becomes where do I take this idea from here? Only time will tell from this point on.