B2: In The Foot Steps Of Others or Another Commentary of B2 Keep On The Borderlands

I was rereading Robert Howard's Beyond The Black River last night for Crom knows how many times. "It is set in the pseudo-historical Hyborian Age and concerns Conan fighting the savage Hyborian Picts in the unsettled lands beyond the infamous Black River.",according to Wiki break down. But the story really put me into the feel of B2, a bastion of civilization set against a degenerate race of descendants who have been pushed beyond the Black River itself. Of course someone's already thought about this for OD&D & I can see why. The set up is great for B2The thing about Robert Howard's Beyond The Black River is that it almost has a  Last of the Mohicans feel to it or better Congrad's Heart of Darkness. This ties into the feel that,'There are places that adventurers shouldn't go.' I've done several meditations blog posts & notes about the Keep. 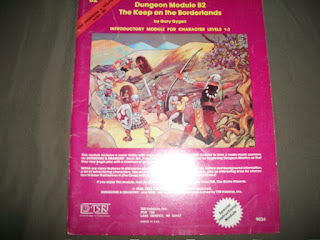 But now its got me thinking about In Search of the Unknown as a possible almost Aliens style location or nega dungeon after Keep of The Borderlands is done. Something went horribly wrong inside the castle & its secrets are waiting. Because of the nature of this classic module both are easily customized into a sword & sorcery style mode & easily interconnected. But is there more going on here? Could the castle of In Search Of The Borderland be harboring some Lovecraftian secret before the beginning of time within its walls? 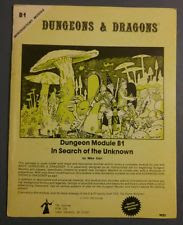 If we look to both the original B2 Keep On the Borderlands adventure & B1 In Search of The Unknown, the answer to my quiry is right within the plot of B1;"Many years ago two wealthy adventurers, Roghan the Fearless and Zelligar the Unknown, built a hidden complex known as the Caverns of Quasqueton. From this base, they conducted their affairs away from the prying eyes of civilization. While of questionable ethical standing, the two drove back a barbarian invasion and gained the support of locals. Eventually, they gathered their own army and went on an expedition against said enemies, where they met their demise." Could both Roghan the Fearless and Zelligar the Unknown, have stumbled upon to secret and arcane knowledge that they're rivals feared? Knowledge that might give them a dangerous advantage against others?
I have this dream of layer upon layer of various civilizations that have risen and fallen in the Ancient & Accursed Terra, with various folks building upon the remains of one fallen race after another. Picking up secrets, knowledge, etc. from the remains. Thusla Doom from the Eighty Two Conan film is a good example of this sort of a character or possible NPC influence for an old school game. A friend back in the Eighties used such an NPC  character as the power behind the throne and rise of the evil elemental religion in wilderness around the Caves of Chaos. 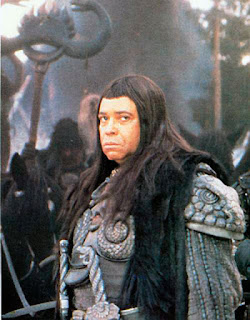 Another way that this might work is to have the Keep be a former bastion of civilization that belonged to the enemies of Roghan the Fearless and Zelligar the Unknown, but its long since fallen as they have passed into eternity leaving weaker and lesser men to fill in their  shoes. Here's where the adventurers come in.

Another way that I've also recently used these two modules is to have them be the remains of outposts that once belonged to the Elves of Dark Albion. There are several reasons for this:

There's something about the wilderness of a a sword & sorcery setting like Howard's Beyond The Black River that fits Keep On The Borderland. Beyond the strangeness of the adventure there's a thousand ways of adding in the keep as a safe haven against the horrors that seem to lay just beyond its walls.