I had a great post apocalyptic game of Dungeon Crawl Classics game last night with my crew but it felt like there was something off or missing. The players had a great time & everything went off without a hitch. But two things are bothering me, one these are not my players per say (this is my friend Steve's group) and two this isn't a regular group of players getting together. This was only a one shot mini game with definite beginning, middle, and end. But something is bothering me. I can't really put my finger on it. I think that I want to crawl back into a sword & sorcery game though. Something along the lines of the cult classic animated film Fire & Ice film by  Ralph Bakshi from 1983.


So yesterday I spoke with a friend at length about running a game at a local hobby shop. I wanted to run KSlacker's amazing Atonishing  Adventurer, Conqueror, King & Astonishing Swordsmen & Sorcerers of Hyperborea mash up system. But according to him I might be making a rod for my back because we might not have experienced role players or old school gamers who would be interested in such a game.
So I began to think again about this game & thought about Isle of Dread from the B/X Dungeons & Dragons Expert set but then B1 Keep On The Borderlands has been haunting me for a while now. I'm almost tempted to run my own ACK'ed version of In Search of the Unknown especially after reading about this Astonishing Swordsmen & Sorcerers revamp of the module. 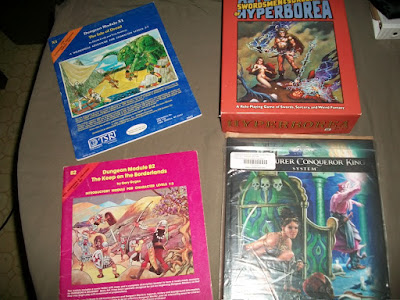 I think that part of the problem is dealing with classic era published modules vs OSR material that is the fact that much of it continues with and adds on so many good options. Dungeon masters today literally have to be editors & cut & trim or add as they need to based partially on the needs & dictates of the game play. This isn't as easy a balance to strike as it at first seems. I think that there's a good degree of disciplined on the part of the DM to cut back some of the 'neat' & 'cool' material with new players. This is one of the reasons that I'm thinking of going back to basics or making my own dungeon. With In Search of the Unknown there's a lot of potential for DM and even player customization. 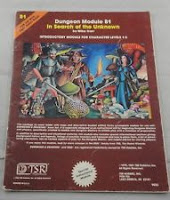 What I'm going to have to do is to run this adventure just like a convention event set up with a definitive beginning, middle, and ending point that can easily be run in one day. This is one of the reasons why I've been studying the various classic tournament modules from Advanced Dungeons & Dragons over the last couple of months. Game play balance isn't easy & there's an art to learning to run at conventions. I know that I'd love to marry Astonishing Swordsmen & Sorcerers into this even as background material. There's lots of decisions to make here on my part & speak with players about this. 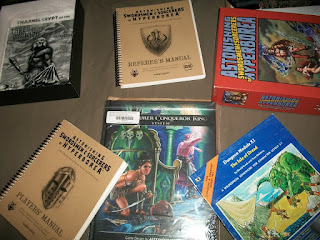 This blog is as much an organic thing as anything else & helps to crystallize many ideas & themes that echo through my games. I really like using Adventurer,Conqueror, King to take this in the direction of domain play especially in classic B/X modules.
There's also the potential for the players to decide to use B1's location as a base which is something that has happened in the past & fits into the game objectives of Adventurer, Conqueror, King's design. I'm going to have to think about this & meet with the hobby shop's owners next week. More on this as it develops.
Posted by Needles at 11:47 AM