Mega Dungeons From The Eastern Bloc From The Cold War Era

Mega Dungeons From The  Eastern Bloc

Looking for an off beat location for your alternative post apocalyptic world and your players are jaded? Need a time travel Empire with a twist of the off center?  Are your mutants getting sick of the same old locations from the Legion of Gold and Pitz Burke?
Let me welcome you to the "Eastern Block Era". Here the Soviet/Russian Empire achieved the highest that the West feared. It all came tumbling down of course but the various AI's still maintain the treasure houses of the ancients even in the twenty fourth century. We'll take a quick tour of the ruins of this communist utopia.
Notes

A. A group of occultist/terrorists summoned something from beyond the Outer Darkness and the thing slew them all. It has made this tower its home and waits for the stars to be right again to call down its brothers and sisters from beyond.
B. Creature from Serbian legend makes its home in the tower surrounded by its army of mutant freaks and nothing escapes its notice even as it feeds on the blood of the living surrounded by treasures from a forgotten age.

C. The tower is alive, its very walls pulse with the forces of hell. The tower preys on those who venture inside digesting them slowly as the centuries roll on. The highest level opens to an abyss like dimension and the tower calls across the stars to forces from beyond. The tower now waits for its next victim.

There are a series of forty combat drones that patrol the skies surrounding the place. Many would be adventurers are cut down before they even reach the tower. There are rumors of deep sub basements and lower levels constructed by party officials before the war and the rumors of the precious treasures that they contain.

7. National Library, Pristina, Kosovo - An ancient treasure trove of art, pre holocaust literature, holo tapes, knowledge cubes, and more. This place is guarded by a dangerous A.I. called Nanny and the mini drones that serve her. There are a network of combat drones found through out the ruins of Pristina, Kosovo. These monsters kill any adventurers that they find with impunity and operate as Nanny's eyes, ears, and mouth.  There are networks of secret tunnels beneath the city however that lead into this treasure palace.

Treasures of the The  Eastern Bloc 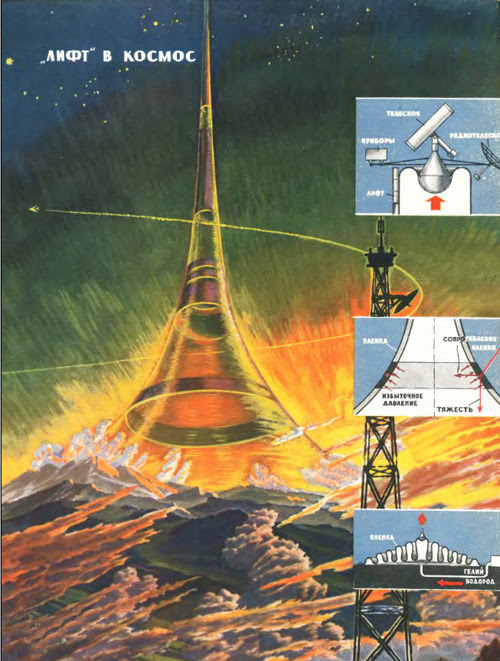 Space Elevator concept art from Tehnika Molodezhi, USSR 1970
This space elevator operates still upon Titan and is waiting with its ruined colony of  robots and ruins for the right group of adventurers to claim its mine and equipment.

Pre war floating city out in the Caspin sea still operating on auto pilot just waiting for some brave souls to claim her.

Northern Siberia Bubble City - This wonderful sealed city of the dead is someplace in the wilds of Siberia still sealed against the outside world. A small population of mutants is said to rule here.

The People's Maglev Train - This underground wonder once ran from Moscow to China. The artificially intelligent A.I. Trains still run and maintain themselves but the secrets to their operation is lost except within the National Library, Pristina, Kosovo. The rumbles of their passage is still said to echo through the darkness.

The Lost Garages of Moscow - These incredibly complex garages dot the landscape of the ruins of Moscow. There is a king's ransom in pre Apocalyptic vehicles locked within the hermetically sealed cells of this garage. Only an intrepid group of adventurers might brave this ruinous death trap.

All illustrations from from the Io9's article "The groovy socialist world of 1970s Soviet futurism" by Vincze Miklos. You can find even more madness right over HERE.

Using the Mega Dungeons From The  Eastern Bloc For Your Game

These locations boast so much for a game set in the wilds of a post apocalyptic Russia. For many games this means a change of pace completely .
The Logan's Run Television show is  great for a Soviet post apocalyptic landscape. Simply gather your party, give them a vehicle and a map of Russia and go. Mutant Future is the perfect venue for this style of play.
However the locations could be easily converted over to a "Quest For The Star Ship Parts" this works a bridge gap from Mutant Future over into the wilds of Stars Ships and Space Men Second Edition.
For Stars Without Number - The soviet era buildings make excellent alternative Earth ruins. A reminder of a time now lost as colonies have moved on.
Terminal Space allows a  DM to move the horrors of Lovecraft and OD&D into a different background entirely.
Metamorphosis Alpha first edition allows one to move the action into the world of the Warden as it clashes with the Soviet Era.
X Plorers can allow the exploration of this alternative universe as both time line or as relics of a bygone age. These relics should not be without traps of various types just waiting for players to trip them up. They might even be left overs from the Atomic Wars of the twenty fourth century.
Happy Gaming.
Posted by Needles at 8:58 PM