Something Rotten in the Kingdom Geoff - Expedition to The Barrier Peaks 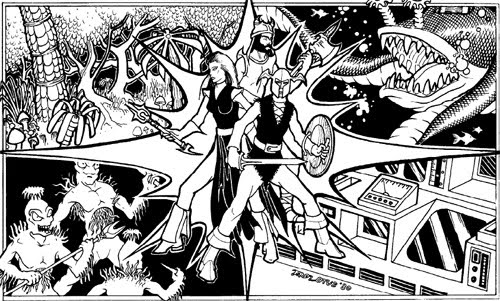 When Larry's players heard that I was nutting this module the reactions were mixed to say the least. Because this is an old school module they ran from excited to bored "Meh" as well as everything in between.
However when Sunday night came I had seven players & three phone calls from players who wanted in on the adventure. So I had a gut feeling that it was going to be like this. So I padded out the encounters in Geoff.

Something rotten in the Kingdom Geoff

Something rotten in the Kingdom Geoff - The PC in tonight's adventure have run into a number of invasive species of monster in the kingdom. The party's druid had quite the work out identifying or at least trying to some of the life forms they encountered before being hired by the king. I've actually had the adventurers coming together almost "Gunsmoke" style. Dealing with problems & issues caused


by the appearance of the Warden. I've had seven players but all ten want in on the action. They're quite please & a bit confused as to some of this prequel crap that I've had written before hand. The fact is that one of the players Charley has played this adventure before hand. Me being the bastard that I'm dealing the players a couple of curve balls. My buddy Jon Johnson clued mean in a couple of lead ins with the encounters. So I've padded them out & moved the party into the hiring by the king at the end of the play tonight. The encounter with the land shark scared the crap out them & that's only the beginning

The PCs were riding through a village & noticed that it was deserted! The whole place was a wreck hovels torn up, the stables, smithy gone, the small temple overturned etc.
That's when the LAND SHARK showed up!
It took the entire party 35 minutes to dispatch the damn thing & there was a hobbit fighter! The player was red faced by the time the evening was done! Seriously they hated those things. These are so going in my SWN campaign! They were down three horses when all was said & done!

Now the rest of the ten players will be meeting in the king's castle next week more later
Posted by Needles at 9:08 AM