The Many Faces of The Amazons in Original Dungeons & Dragons, Advanced D&D First Edition, & Beyond 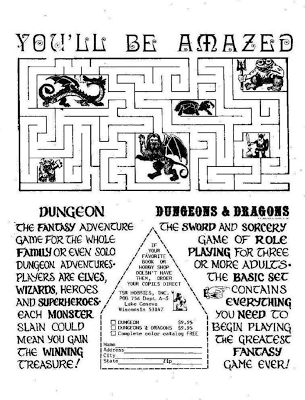 Amazons in original Dungeons & Dragons were something of a mystery to me growing up. We heard rumors of these mysterious women warriors and tribe of mythology but where were they from. There weren't any hard and fast evidence of there being a class in any of my original Dungeons & Dragons books. The beautiful witch and amazon from the OD&D Might & Magic book might have been the origin of these women warriors. 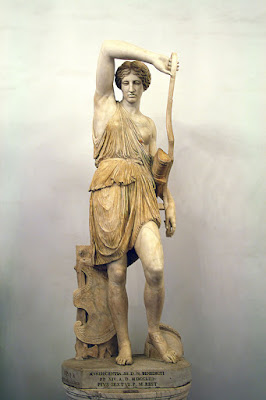 illustration  made by Jean-Pol GRANDMONT

In mythology the Amazons have a very long and pretty detailed history according to Wiki;"
In some versions of the myth, no men were permitted to have sexual encounters or reside in Amazon country; but once a year, in order to prevent their race from dying out, they visited the Gargareans, a neighbouring tribe. The male children who were the result of these visits were either killed, sent back to their fathers or exposed in the wilderness to fend for themselves; the girls were kept and brought up by their mothers, and trained in agricultural pursuits, hunting, and the art of war. In other versions when the Amazons went to war they would not kill all the men. Some they would take as slaves, and once or twice a year they would have sex with their slaves.[18]
The intermarriage of Amazons and men from other tribes was also used to explain the origin of various people; for example, the story of the Amazons settling with the Scythians (Herodotus, Histories 4.110.1-117.1).[19]
In the Iliad, the Amazons were referred to as Antianeirai ("those who fight like men").
The Amazons appear in Greek art of the Archaic period and in connection with several Greek legends. They invaded Lycia, but were defeated by Bellerophon, who was sent against them by Iobates, the king of that country, in the hope that he might meet his death at their hands.[20][21] The tomb of Myrine is mentioned in the Iliad; later interpretation made of her an Amazon: according to Diodorus,[22] Queen Myrine led her Amazons to victory against Libya and much of Gorgon.
They attacked the Phrygians, who were assisted by Priam, then a young man.[23] In his later years, however, towards the end of the Trojan War, his old opponents took his side against the Greeks under their queen Penthesilea "of Thracian birth", who was slain by Achilles.[24][25][26][27][28][29]
One of the tasks imposed upon Hercules by Eurystheus was to obtain possession of the girdle of the Amazonian queen Hippolyta.[30][31][32][33] He was accompanied by his friend Theseus, who carried off the princess Antiope, sister of Hippolyta, an incident which led to a retaliatory invasion of Attica,[34][35] in which Antiope perished fighting by the side of Theseus. In some versions, however, Theseus marries Hippolyta and in others, he marries Antiope and she does not die; by this marriage with the Amazon Theseus had a son Hippolytus. The battle between the Athenians and Amazons is often commemorated in an entire genre of art, amazonomachy, in marble bas-reliefs such as from the Parthenon or the sculptures of the Mausoleum of Halicarnassus." 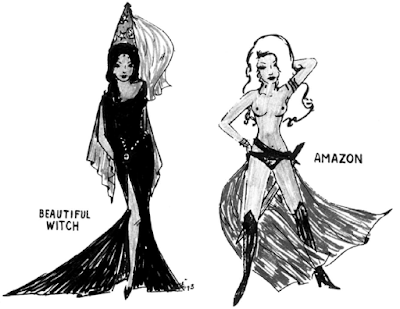 But where did they start becoming incorporated into the OD&D consciousness? That would actually be from the Judge's Guild from 1982's classic Thieves of Fortress Badabaskor. There are Amazon magic users, so this establishes Amazons in Judge's Guild products as a race not a class. This places them right into Advanced Dungeons and Dragons first edition's back yard. 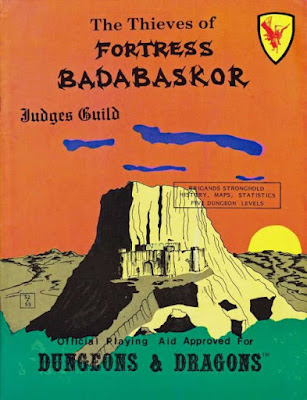 Then according to Dragon foot member Bochi;"Shield Maidens of the Sea Rune describes an Amazon stronghold and their culture. They are nearly all fighters, but some are mages. Although this module is a late one (1982) the idea that Amazons have magic-users is there in the earlier Thieves of Fortress Badabaskor too.

In SMotSR the Amazons are descended from a technologically advanced culture from which they have obtained alchemical secrets. Consequently they can manufacture rings, bracelets and potions to protect themselves. None wear armor, except for raw recruits: higher level Amazons wear little or nothing in battle, relying on their protection devices (which do not work in conjunction with armor anyway).

The nakedness of Amazons in battle is said to be a distraction to their male enemies. Although a mechanic is not suggested, I suggest male opponents attack at -1 to hit and damage. The Necromancer Games edition gives a +1 "combat precognition" AC bonus which seems to be a politically correct way of acknowledging their special assets: old schoolers can just say that boobies put you off your stroke. Again, Amazons are a race, not a class, in the 3ed version."


Of course this same thread also suggests simply making Amazons female fighters with a bonus on their AC for lack of armor.
This is right in line with Heavy Metal & Eighties pop culture aesthetic. The Amazon race next pops up in Dave Hargrave's Arduin which follows closely with the Judge's Guild material. The Shield Maidens of the Sea Rune has both the Amazons as a race and a sisterhood. I also love the post apocalyptic fantasy angle of both the JG & Arduin material. Finally Amazons appeared in  Drag #43, p. 29 as an official creation. 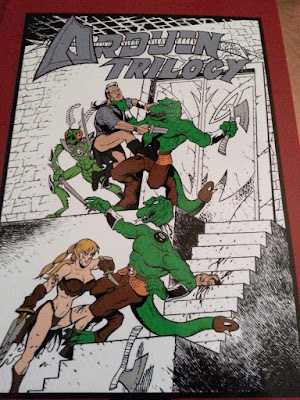 But over the years I wanted something more then mere fodder. Various players of mine have expressed a passionate interest in Amazon warrior women. Reaching into history we have the "Dahomey Amazons or N'Nonmiton, which means "our mothers" in Fon, were a Fon all-female military regiment of the Kingdom of Dahomey in the present-day Republic of Benin which lasted until the end of the 19th century. They were so named by Western observers and historians due to their similarity to the semi-mythical Amazons of ancient Anatolia and the Black Sea." The seem like they stepped right out of a Lamentations of the Flame Princess game but they were real. I've used World of the Lost from Lamentations of the Flame Princess to model them for a 19th century Lamentations one shot adventure. 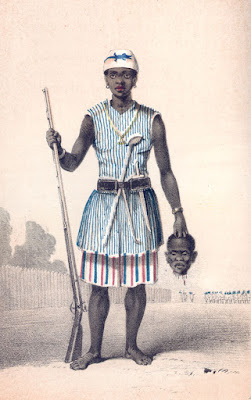 For a more sword and sorcery style of game the Amazons have recently made appearances in Astonishing Swordsmen & Sorcerers of Hyperborea where they're a complete PC race of humans from Old Earth. This piece called Radium Pistol," by Val Semeiks for the AS&SH second edition kickstarter shows two Amazon adventurers raiding a dungeon. 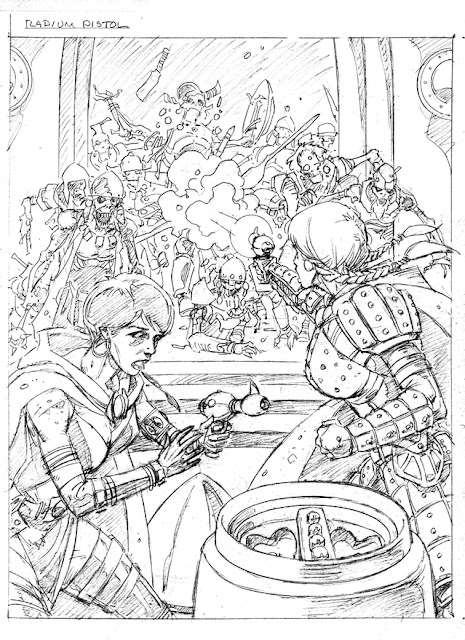 When I was running my Accursed Atlantis one shot I pulled from my comic book collection an Eighties series from Marvel's Epic line called Sister Hood of Steel by Christy Marx from Eighty Six.
"In the series, a society of warrior-women has survived for generations by hiring out its elite forces. Each Sister has been trained in the art of battle since childhood. The series focuses on the life of Boronwë, a young woman coming of age in a world where survival rests on the edge of a blade."
This wasn't the usual sword and sorcery fare instead this was a series about an elite mercenary unit of warrior women which had depth & some really well done story arches. 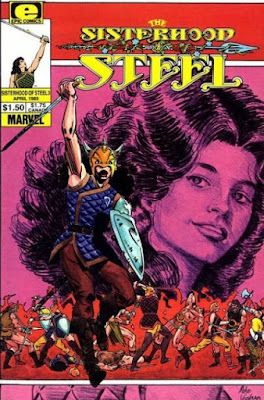 I drew my inspiration from this series which still has a solid website on the series which later on was published by Eclipse comics after a disagrement in content;"Subsequently, Marx took the series to Eclipse Comics, which in partnership with Moonfire Productions (Marx's self-publishing imprint), published the graphic novel, Boronwë: Daughter of Death, in both paperback and hardcover. Peter Ledger illustrated it."
For me the Amazons remain one of my favorite PC options for players at my table. They're fierce, dangerous, and foes worthy of taking down a party of adventurers in a moment's notice. Many of my players have come to fear these warriors without peer. 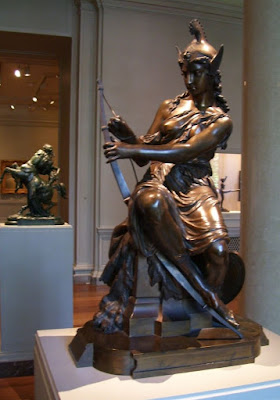 Note that other orders and races of warrior women have appeared throughout history, mythology, and popculture we'll get to those in other blog entries.