So Rpg Pundit has finally released his design notes for Dark Albion's Cults of Chaos  & they're interesting to say the least. 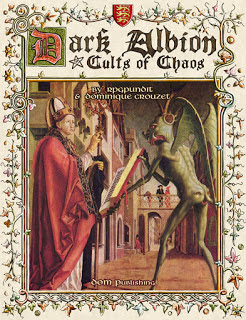 Why does Dark Albion appeal to me so much? Well, because its pretty close to a low magic Dungeons and Dragons alternative War Hammer Fantasy campaign world that actually works. Pundit breaks down the book chapter by chapter, etc. With a view toward using Dark Albion's Cult's of Chaos toward a Dark Albion based campaign which is fine. That being said I don't simply use game books solely based on simply the game setting that they were intended for. Instead I use many books in a two fold way; one is a tool kit for the world setting it was intended for. The second way is as an OSR tool kit which seems to drive OSR authors & designers over the edge. Shrug at your table you can do what you want. This tool box approach to the cults is one of the main appeals about Cults of Chaos;"The Chaos Cults generated in the book are highly unique. I think you could use the methods in Cult of Chaos a hundred times and never come up with exactly the same type of group.  As you might expect if you already know my predilections in gaming (and game design), this is done largely by the use of random tables, which are arranged in a process of of multiple steps to create an entire cult from scratch." Which is right along the lines of how I've been using this book over the course of the last couple of months. I'm going to cherry pick & play with some of the opinions, observations, and what not of this solid overview and review he's done.
When you start getting into meat of Dark Albion's Cults of Chaos it's actually an investigative occult or witchcraft campaign book. The book is actually a two fold book; on the one hand it fleshes out the enemies, NPC's, structure, and all of the little details of a cult of Chaos. On the other hand it's the flip side of creating these minor and grand  antagonist NPC's that the PC's are going to have to deal with.
Here's an area that I've got a completely different matter of opinion from Pundit;"Next, we get to another major section of the book: Mutations. Now, if you've played Warhammer, or Gamma World, or even some adventures in Lamentations of the Flame Princess, or Call of Cthulhu, you might think you know what you're getting here. But the Cults of Chaos mutation tables are very different.  They aren't "Lovecraftian". They aren't about giving you superpowers either (though a few have certain advantages).  They aren't (mostly) about slime or goo or the type of body-horror that you see some LotFP books get all excited about.  Instead, they are a collection of changes to not just body, but also mind or spirit, that are inspired by medieval ideas. Medieval stories, legends, fears, superstitions or even art (you know, that strange or macabre art that you see, especially in the period between the black death and the dawn of the renaissance).

There's clear guidelines for mutations, where you can get them or how, what you can do about them. Generally speaking, it has to do with exposure to pure Chaos. So demons, chaotic substances, very powerful chaos artifacts, elves or extraplanar emanations.  Some of these guidelines are specific to the type of setting that Dark Albion is about; so they would make sense in a medieval authentic society but might not be as significant if you're running a game in Greyhawk.

Mutations are divided into three categories: minor, moderate or severe.  A GM can determine that a given exposure will create one of these types of mutations or he can roll randomly to determine severity. Each list also has a random table for rolling up the mutation (though of course the GM can always pick if he prefers)."
Its true the mutations don't give you occult super powers but they surely could be authentically dangerous  in a Greyhawk society. The key here is actually right in how Sword & Sorcery literature is defined and so this dovetails right into yesterday's blog entry;"Since its inception, many attempts have been made to redefine precisely what "sword and sorcery" is. Although many have debated the finer points, the consensus characterizes it by a strong bias toward fast-paced, action-rich tales set within a quasi-mythical or fantastical framework. Unlike high fantasy, the stakes in sword and sorcery tend to be personal, the danger confined to the moment of telling.[4] Settings are typically exotic, and protagonists often morally compromised."
The stakes in 'Sword & Sorcery' tend to be personal and I think when your dealing with Cults of Chaos & the medieval investigative horror track that Cults of Chao plugs into.  Because of the lower tier level magick & rites there is a lethality and fear that Cults of Chaos uniquely brings to the table. 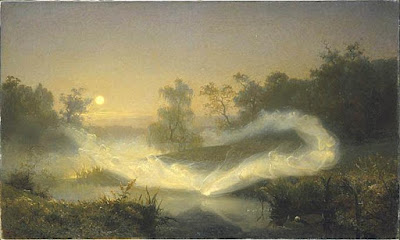 August Malmström Dancing Elves if you see this run like hell in one of my games! Not actually found in Dark Albion or Cults of Chaos but I've used this classic piece of artwork for the Dark Albion setting.

For my own players they loath the Elves of Dark Albion  & after even one encounter with the works of those bastards. They don't bother even looking back they run like hell. Dwarves & 'high elves' were both slave races to the Dark Albion Elves in my campaigns. There is a racial & abiding fear in the human & near human races for these beings & their works.
So in the regard that Dark Albion doesn't have as much to offer a Greyhawk or more traditional Advanced Dungeons & Dragon dungeon master I disagree. There is a ton to pull from Cults of Chaos and these are especially good for putting a different spin on the magic of D&D or AD&D;"There are a couple of very special mutations: "Haunting Intelligence" and "Familiars".  "Haunting intelligences" are possessing-spirits of a sort, based on medieval ideas of planetary-spirits (from medieval astrology) and their relation to what we today would call insanities.  The Haunting Intelligence that only you can hear will give you certain gifts, but also struggle with you to try to fulfill certain obsessions, and in your moments of weakness (or if you are just mentally weak to begin with) you will lose control and go mad with what the spirit wants.

"Familiars" are a much more medieval twist on the D&D version of these.  In D&D it's assumed that the familiar is under the magic-user's control, and is a kind of friendly animal companion.  In Cults of Chaos, familiars go back to being what they were meant to be: 'demons' (chaos-spirits) that are in the body of an animal. They give power and aid to a magician or cultist, but are fundamentally there to try to corrupt the mortal toward chaos, to manipulate and control them."
This can be used to strip out and reskin a traditional classic Advanced Dungeons and Dragons module. This is something I've done many times lately and it works each and every time using Dark Albion's Cults of Chaos. 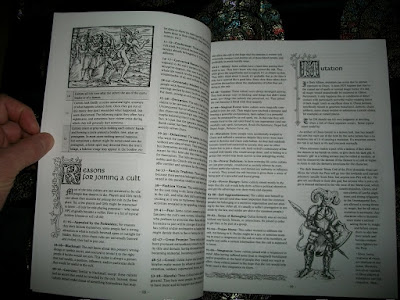 By the way this can be done with classic Greyhawk or Expert D&D modules to create a unique Dark Albion campaign quite easily. Because of the very nature of Dark Albion and the fill in your own material nature of Greyhawk the DM can flesh out minor campaign leg in about a weekend with a bit of work. 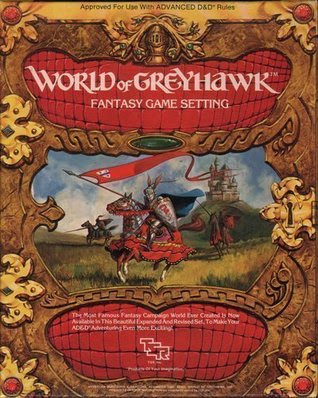 Do I think that Dark Albion's Cults of Chaos is suited for Greyhawk? Actually I think its suitable for just about any low level magic or Medieval setting. I think it should looked at by any DM wanting to use a different take on Chaos and it's works.
We'll get into that soon.
Posted by Needles at 9:43 AM