Agents Of Shield, Level Eight, And The Retro Agents of Shield Campaign For Your Old School Super Heroes Campaign

Its eleven o'clock on a Monday evening and I've been doing a bit of contemplation about Agents of Shield again.
The 'Hub' is coming up tomorrow night.
Will the agents Wards and Fritz make it out alive and will we finally see a real villain organization or *gasp* a super villain.
Last week we had a great tie in with the first Avengers movie and now we get more background on the agents in upcoming episodes.
So we get to see Agent May's background on a future night's show Repairs.
Here's the official synopsis for the upcoming  episode from ABC
A MYSTERIOUS FORCE HAUNTS THE TEAM, ON ABC’S “MARVEL’S AGENTS OF S.H.I.E.L.D.”
“Repairs” – Coulson and his team are haunted by a mysterious force that threatens to destroy them all, and only a secret from May’s past can save them, on “Marvel’s Agents of S.H.I.E.L.D.,” TUESDAY, NOVEMBER 26 (8:00-9:01 p.m., ET) on the ABC Television Network.
“Marvel’s Agents of S.H.I.E.L.D.” stars Clark Gregg as Agent Phil Coulson, Ming-Na Wen as Agent Melinda May, Brett Dalton as Agent Grant Ward, Chloe Bennet as Skye, Iain De Caestecker as Agent Leo Fitz and Elizabeth Henstridge as Agent Jemma Simmons.
Guest starring are Robert Baker as Tobias, Laura Seay as Hannah, Christopher Gehrman as Taylor and. Josh Clark as Roger.
”Repairs” was written by Maurissa Tancharoen & Jed Whedon and directed by Billy Gierhart.

Right now "Thor The Dark World" is the number one movie in the entire country and this show is starting to get better. Last week's episode was pretty good and solid but I'm really starting to have some doubts about the direct that the show is taking.
This is the damn Marvel universe and you've got thousands of characters to pull from people! Over close to forty years of history not to mention the Nick Fury Agent of Shield comic book and the Ultimates universe, along with the movie Marvel universe.
So please wow me, I'm kinda waiting over here folks.

The campaign I eluded to in the blog article's title is a retro Agents of Shield action packed retro sixties super spy game. The origins of which can be found on Agent Phil Coulson's collection of 'antiques' from Shield on his desk. Something of a homage to the origins of the show when in actuality they could point toward a very cool campaign. 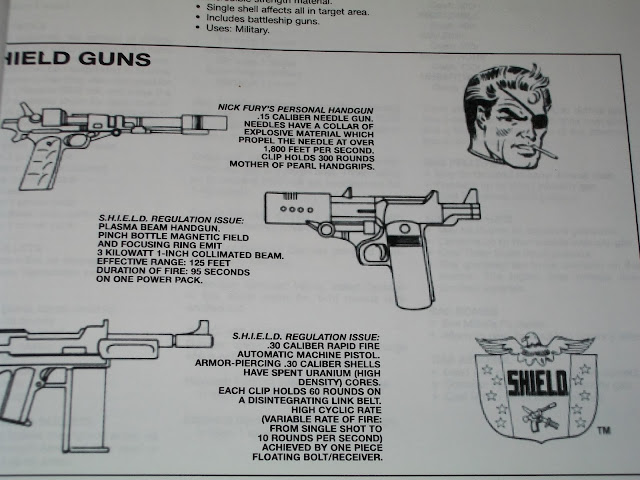 The PC's are Shield Agents dealing week after week with another mutant, super villain, alien menace, post war Nazi hold over, and god knows what.
I've said it before and I'll say it again, the 'Man From Uncle borrowed heavily from the super spy culture of the 60's.

The swinging 60's could provide the PC's with more then enough to handle from the host of Marvel villains copied from the comics.
Hell in the original show we got copies of the Mole man, King Pin, and more. Imagine the PC's facing down the psychotic Weapon X himself 'The Wolverine'.

Suddenly , the PC's being issued The Man From Uncle Specials doesn't seem so far fetched. And what about all that clean up after the supers fight the various villains? Shield was handling that way,way, before any of the other organizations.
And what about the work of Dr. Quest? Hmm, yeah there always was an element of the Marvelous about their adventures.

Imagine the party having to deal with Hydra, A.I.M. and Dr.Zin himself along with his spider bots or saving the Quest family from some jam or other.  Let's not mention some of the issues that the Fantastic Four brings to the table along with Stark, Thor, and the rest of the merry Marvel gang from the 60's. For real 60's and 90's paranoia add in Control to the mix!
Control comes from the Marvel mini series from 1998 call Conspiracy. Basically Control are the guys behind the who creation of the Marvel 616's super heroes and vile villains.  In the movie universe they'd be the gentlemen around Stark senior back in the 60's maintaining the handle of super soldiers program, the militarization of the mutants, and the various alien encounters over the years.
Here's where the gap between Captain America missing heroic and something else is needed. . What's needed are your characters. There is so much history that can be utilized to create a history that blends into the background of your own Marvel universe.
Level Eight begins with the years of the early 60's and ends towards the early 80's when things in the movie Marvel universe begin to slow down. This is a campaign world of high adventure and dark forbidden happenings  foreshadowing things to come.
The 60's are really where I think that a Super Agent's campaign shines.
The stakes are higher, the Cold War is on, and there's glory to be hand against the various baddies.