When floating bodies turn up, Coulson and the Agents of S.H.I.E.L.D must hunt down an elusive killer. No one is safe--not even the team.


Will this episode be more mirrors and shadows with no hint of a cape or super villain? Well this be something brand new in wake of Thor Dark World because new developments are going to be taking place in the wake of the movie.
Well its official that Agents of Shield will follow in the foot steps of Thor Dark World and word from my friends and family who have seen the movie are that its awesome and epic in scope.
'More fun then the first Thor.
We're going to possibly be seeing a hell of a lot of alien/Dark Elven technology left on Earth in the wake of Thor The Dark World. More Asgardian technology as well. This does not bode well for the movie Marvel universe.
Like it or not this technology could cripple or propel Earth's tech axiom up a few notches. Well the Marvel movie Earth that is.

You see with the return of the Asgardians to Earth and the whole Captain America WWII attention that the Red Skull focused on Earth. The Earth of the Marvel movies along with Agents of Shield got really complicated really fast.

You know who really be handy to handle some of this alien technology and whose got a really friendly face as the first family of super heroes for the public?
A family run corporation that has seen more alien invasions, Latvian megalomaniacs, and matters of cosmic importance? The Starks perhaps or maybe the Banners? Nope not them either.
Back in 2005 they made their appearance upon the world stage of one of the Marvel Movie universes. Then disappeared. The Fantastic Four has been there and done that more then the Avengers with whom they have had a more then checkered history with going all the way back to the 1960's.

Yet while everyone has been focused on the X men Days of Future Past news and the Captain America Winter Soldier news. This little piece of old news turned up in one of my Marvel related searches. According to wiki:

"In August 2009, Fox announced plans to reboot the Fantastic Four franchise, with Michael Green and Jeremy Slater writing, Seth Grahame-Smith polished the film's script and Akiva Goldsman and Matthew Vaughn producing.[27] Since the release of 2012'sChronicle, Josh Trank was linked to the reboot and in mid July 2012, he was officially announced to be director.[28] The film is currently under scripting and filming should start mid September 2013.[29][30] The film will be independent from the Marvel Cinematic Universe.[31][32][33] The Fantastic Four reboot will be released on March 6, 2015.[34]"
This is the important part of the statement,"The film will be independent from the Marvel Cinematic Universe."So basically the team whose comic books have sold 150 million comics will not be part of the 'Marvel Cinematic Universe.'
I don't want to sound like the giant comic book nerd that I'm but it sounds lame.

The Fantastic Four are like royalty of the Marvel Universe. Seriously they were a game changer and started a trend that hasn't stopped. The not so perfect comic book super hero family.

Here's a very short overview according to Wiki :

The four individuals traditionally associated with the Fantastic Four, who gained superpowers after exposure to cosmic rays during a scientific mission to outer space, are: Mister Fantastic (Reed Richards), a scientific genius and the leader of the group, who can stretch his body into incredible lengths and shapes; the Invisible Woman(Susan "Sue" Storm), who eventually married Reed, who can render herself invisible and later project powerful force fields; the Human Torch (Johnny Storm), Sue's younger brother, who can generate flames, surround himself with them and fly; and the monstrous Thing (Ben Grimm), their grumpy but benevolent friend, a former college football star and Reed's college roommate as well as a good pilot, who possesses superhuman strength and endurance due to the nature of his stone-like flesh.
Ever since their original 1961 introduction, the Fantastic Four have been portrayed as a somewhat dysfunctional, yet loving, family.

Things weren't always harmonious between the FF and the Avengers.
The epic battles between the Hulk and the Thing were the stuff of legend.

Then there was of course the Thing and Thor battles were were epic and incredibly cool.

The FF always put a human face upon the whole of the Marvel universe. In many different games I've run the Fantastic Four were part of the cultural and historical landscape. They really were mortals who dealt with cosmic threats and survived to tell the tale. As always the FF were New York based and allowed a DM when the original Marvels Super Heroes game to connect the city and New England right into the comic book landscape.
The FF has iconic appeal allowing a DM to instantly pull from the roaster of foes for any group.

Reed Richards connections with Stark and Shield just can't be ignored going all the way back to the 60's. Couple this with the outings with Thor, Hawkeye, and more. Well you get the idea.

Did I happen to mention the locations, the foes, the peoples like the Inhumans, the Baxter building.
Don't get me started on the Black Panther and of course Galactus. 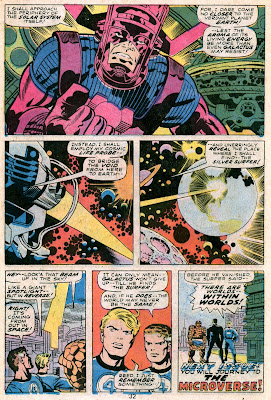 How about this for a premise for a game of MSH? The PC's are agents handling the loose ends of the Avengers or the Fantastic Four. Everyday they have to pick up the loose ends of the various FF story lines Hell you could set in the 1960's and add a Man of From Uncle element.
For this style of game I highly recommend (again)  from the basic set New York, New York and Concrete Jungle  along with Gates of What If which if used right will allow you to create and alternative Earth to operate on with impunity.
All available right
HERE
The book with all of the FF secrets is of course the Fantastic Four Compendium. Out of date yes but with oh so much retro flavor.

The modules which really star the FF are the So called Negative Zone trilogy.
We really see the Negative Zone in a heavy hitter kinda light with the intro of this one.
According to Rpg net :
" Part One of the "Negative Zone Trilogy."

A powerful cosmic device has been seen on Earth and the players must investigate.

Warlord of Baluur contains a 32-page adventure book which details the player characters, the non-player characters, and the story itself. You should also have a cover that features various maps designed to help play run smoothly.


We get into the deep end of stuff with the technology from the Negative Zone really tapping the PC's heads and some really nasty NPC's. Again according to Drivethru:

The Cosmic Control Rod Trilogy continues as the FANTASTIC FOUR ventures into the Negative Zone to face off against ANNIHILUS, the Rod's creator. Agents of SHIELD are lost in the anti-matter universe of the Negative Zone, and it's up to you heroes to save them. Once inside the Zone, you must face the wrathful return of the evil artificial intelligence QUASIMODO. The final conflict on Annihilus' planet shows that, even weakened, the despotic Spore of Arthros and Terror of the Negative Zone is still one of the most dangerous and powerful villains ever seen. The adventure contains a surprise ally who makes even ANNIHILUS quake as he approaches.

The final part brings the action home to the PC's in this one.

The players confront the true force behind the events detailed in the two previous adventures.

Stygian Knight contains a 32-page adventure book which details the player characters, the non-player characters, and the story itself. You should also have a cover which features various maps designed to help play run smoothly.

Running these the DM might have to bring on some of the bigger Super Agents of Shield. The Blue Diamond, Orignial Human Torch, perhaps the Vision prewhite out, or even just use the FF.
All of them are available for free download right over
HERE
I've run these over and over again. My best advice is to always run this batch before running something like the Comsos Cube adventures where the truly cosmic seems to happen. I'm a bit disappointed that the FF movie won't have an impact upon the Movie Marvel universe but that doesn't mean that it can't on your own Marvel Supers game!
Posted by Needles at 9:23 PM