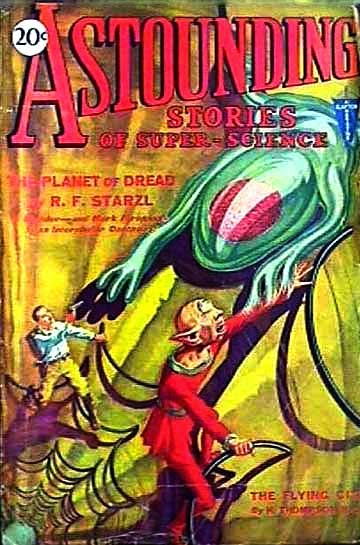 You can get it right
HERE

Here's a classic from the great pulp era of science fiction. A time when Ming The Merciless and many others threatened the universe and Edgar Rice Burroughs was king. Here is the roots of the science fiction magazine that would later become Analog.
This issue contains the following:

If you are wondering, Stories in this issue are:


Old Crompton's Secret by Harl Vincent
Spawn of the Stars by Charles Willard Diffin
The Corpse on the Grating by Hugh B. Cave
Creatures of the Light by Sophie Wenzel Ellis
Into Space by Sterner St. Paul
The Beetle Hoade by Victor Rousseau
Mad Music by Anthony Pelcher

The Thief of Time by Captain S.P. Meek
Using this issue for your OSR gaming.
The Creatures Of The Light and the Beetle Horde make excellent short mid campaign science fiction encounters and adventures. The Thief of Time is a great little time travel yarn that could be used as a jump off point for a campaign.

Also, this pdf  gave me a chance to see what kind of an editor Harry Bates was, and he was pretty good for a man whose most famous contributions to the field were the Hawk Carse stories and the classic "Farewell to the Master." The whole issue is chalk full of gold and you can mine this and and another great collection I came across. The term science fiction had not been invented when these issues of Astounding hit the new stands instead we got 'super science'
'Super science' is the term that was used before someone came up with 'science fiction.'
Another great collection  is this one from Project Gutenburg
HERE