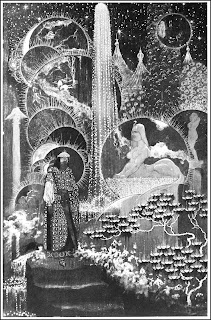 Madness rides the star-wind... claws and teeth sharpened on centuries of corpses... dripping death astride a bacchanale of bats from nigh-black ruins of buried temples of Belial...
HP Lovecraft
Travel The Infinite Corridor of  Black Seas(Magic User Level 5/Cleric4)
The caster reaches across the infinite gulfs of space into the churning blackness of hyperspace & summons a doorway into the darkest gulfs of the night allowing them to journey through time & space to other planets & worlds beyond the ken of mortal men. A cleric casting this spell calls to a minor entity dwelling between the swirling gulfs of nether space to move him plus others of his choosing to his destination. There is a down side to either mage or cleric using this method. On a roll of 1d6 a random party member or Npc may be chosen by the blackness of the gulf for a meal. As the party crosses the gulfs their screams echo throughout eternity. The spell caster may choose a victim of this spell also. Once the destination is reached a dark circle of blood splattered ground will be visible where the person was standing originally.
Pull Me Under I'm Not Afraid(Magic User 6th level/Cleric 7th)
The user casts this spell & steps into the Infinite Darkness & at once a gaggle of arms made of blackness & pitch reaches out to pull the caster into the darkness between the stars. The caster receives a blurring impression places, peoples, things, from across space & time where the darkness touches. The caster may choose one object that he sees. The caster must roll 1d20 with a higher result gaining the object in question. The caster will however age 1d6 years after casting this spell. Clerics will have a chance of being asked pointedly by their planar power why they want this object. There is also a chance at the Dungeon Master's whim that a Hound or power of Tindalos may notice the character from the shadowed angles of time & come for them! The spell may only be cast 2 twice per day.
Summon The Wanderer of  Infinity(Magic User 6th level/Cleric7th)
This is not a spell to be taken lightly, the user casts the interval of oscillation & he is dazzled and confused by the rapidly whirling light-images, but these quickly resolved into geometric figures, an inconceivable number of them, extending off into limitless space in a huge arc, revolving and tumbling like the colored particles in an old-fashioned kaleidoscope. Cubes, pyramids and cones of variegated hues. Swift-rushing spheres and long slim cylinders of brilliant blue-white; gleaming disks of polished jet, spinning....Suddenly a ten-foot circle of blue-white metal set in the floor will appear and be illuminated by a shaft of light. This is the force area & anyone stepping into this area will be transported to the nearest alternative dimensional realm that is in vibrational orbit with the Prime!
Then a tall stranger will  confront the caster. A half-nude giant with bronzed skin and of solemn visage. The stalwart build of him and the smooth contours of cheek and jaw proclaimed him a man not yet past middle age, but his uncropped hair was white as the driven snow. This is the Wanderer of  Infinity. He is lawful & yet there is a sadness about him. It is unknown if he is merely the sole example of his race or if their are others. He wanders the infinite byways of time & space. He will however transport the caster & party to a point in dimensional space if the cause is just. He will drop a party off & return them from whence they came. He travels the dimensional spaces in a sphere of super science.
The  mission;"
My mission throughout eternity, Earthling—can't you sense it? Forever and ever I shall roam infra-dimensional space, watching and waiting for evidence that a similar catastrophe might be visited on another land where warm-blooded thinking humans of similar mold to my own may be living out their short lives of happiness or near-happiness. Never again shall so great a calamity come to mankind anywhere if it be within the Wanderer's power to prevent it."
Parties should not waste his time or be abandoned at the most ill advised times. He may only be called once a day by a caster.
The Panels Of Planar Peril (Magic User level5/Cleric level 4)
The caster creates a series of  doorways of  Outer Darkness around the target which must save vs. or be sucked into 6 separate dimensional spaces as pieces of the target are finely sliced & transported to else where. There is a ld6 chance that a creature of the outer darkness may take notice of the blood & violence be done in the area & wish to investigate.
Planar Powers - The psychic powers of  the planes are some of the most dangerous & demanding powers a character can have & should be used with care by a game master
Sense The Darkness: This power allows the character to cast their senses into the rolling dimensional space & sense if the infinite gulfs of  hyper dimensional reality have been opened in the area. A user can use this ability for 1d4 rounds per 10 feet of the level of the user. This power is usable 2 twice per day

Control  Gateway: This power allows the user to take control of a dimensional gate way within eye shot of the user of this power. The user may move the gateway anywhere within line of sight. They may shrink said gate way or expand it. The user however may not actually close the gateway merely control it.
Call across the Infinite: This power allows the user to communicate across an already existing dimensional portal or planar opening. The user must have knowledge of where the target is in order to communicate with them. There is however no limit over which this power may be used! From telepathy to actual vocal communication all is available to the user.
Control Planar Being: The user  of this power has amazing control over the actions & abilities of dimensional beings of  less then 5 hit dice or lower. The power is usable 3 times per day.
Attune The Mind's Eye:  The user of this power is able to attune a PSY weapon to his or her own mind for making a planar journey, the weapon will function normally for the user in the other dimensional space. Prolonged journeys aren't recommended.
The next installment of this article will have more. Thanks..