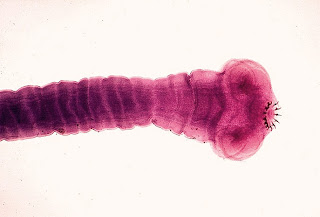 A parasitic worm often found between the eddies of subspace where they lurk waiting for a passing object to move through. These vile creatures exist in at least 4 different planes of existence at the same moment. The minute that they detect a ship or traveler moving through their strange angles of subspace they are drawn to the life energy of the target. The victim must make a  saving throw vs poison or fall over unconscious as the parasite begins to feed on the life force of the victim. More parasites will be called to the feast as the victim's life ebbs away from the star fish like feeding mechanism of the parasite. Seen with the naked astral eye the parasite looks like a cross between an overly large star fish & a dead flat worm left in slime for a time. These creatures are often found in the war torn ruins of space battles drawn to the quantum flux of hyperspace jumps & faster then light drive leavings. Only medical super science can overcome an infection of these creatures. They are often seen growing to about a 2 foot length after a recent feeding

Email ThisBlogThis!Share to TwitterShare to FacebookShare to Pinterest
Labels: monsters