When your getting into Fire & Ice your getting into some of the top talent in the fields of animation, fantasy artwork, film production, artwork, etc. including comic book writing and more. Yes this film is an underappreciated gem of the sword & sorcery genre. Just take a look at the film & street cred that this film has according to Wiki;" The film, a collaboration between Bakshi and Frank Frazetta, was distributed by 20th Century Fox, which also distributed Bakshi's 1977 release, Wizards. The animated feature, based on characters Bakshi and Frazetta co-created, was made using the process of rotoscoping, in which scenes were shot in live action and then traced onto animation cels.
The screenplay was written by Gerry Conway and Roy Thomas, both of whom had written Conan stories for Marvel Comics. Background painter was James Gurney, the author and artist of the Dinotopia illustrated novels. Thomas Kinkade also worked on the backgrounds to various scenes. Peter Chung, of Aeon Flux fame, was a layout artist." And that's just some of the talent that worked on this film back in '77. I saw this at the tender age of seven years old & yeah it made a huge impact on me. 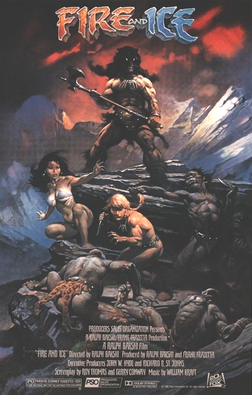 Something my friend Steve & I noticed is that there is an internal flow to the story that one finds in animated films but there's also that same sort of flow in old school hex crawls. This was particularly true of B/X Dungeons & Dragons modules in campaign mode. A look at the basic plot overview of Fire & Ice will show you exactly what I'm talking about;"
From their stronghold in Icepeak, the evil Queen Juliana (Eileen O'Neill) and her son, Nekron (Stephen Mendel), send forth a wave of glaciers, forcing humanity to retreat south towards the equator. Nekron sends a delegation to King Jarol (Leo Gordon) in Firekeep to request his surrender, but this is a ruse orchestrated by Queen Juliana for Nekron’s sub-humans to kidnap Jarol’s barefoot, bikini-clad daughter, Princess Teegra (Cynthia Leake); Queen Juliana feels that Nekron should take a bride to produce an heir.
But Teegra makes an escape and comes upon Larn (Randy Norton), a young warrior and the only survivor of a village razed by glaciers, who offers to escort her back to Firekeep. As Teegra is recaptured, Larn teams with the mysterious Darkwolf (Steve Sandor) to save Teegra and then travel to Icepeak to stop Juliana. Darkwolf faces Nekron and kills him as Icepeak succumbs to lava released by King Jarol and is destroyed.
The film finishes with Larn about to kill a beaten sub-human until Teegra stops him saying that "it's over" and embraces him. Darkwolf is seen atop a cliff; he watches the pair, smiles and then disappears. Teegra and Larn kiss as the credits roll."
You've got all of the basic factions aligned where they need to be for the adventurers find them along the adventure path. This is something we'd later see during the evolution of adventure video games especially the text based ones like Zork. Yes I'm that old. There's another way of looking at this in the point crawl system of the Hill Cantons & there's an excellent series by Chris Kutalik. This sort of adventuring uses an absaract map to great effect but does put a bit of the pressure on the DM.

Basic placement of the factions of a campaign is going to determine the balance or lack there of when it comes to the adventure flow in an old school campaign. Sword & Sorcery campaigns don't often have a lot of balance they are punctuated by the violence & pulpy weirdness of the medium.
"Sword and sorcery (S&S) is a subgenre of fantasy characterized by sword-wielding heroes engaged in exciting and violent adventures. An element of romance is often present, as is an element of magic and the supernatural. Unlike works of high fantasy, the tales, though dramatic, focus mainly on personal battles rather than world-endangering matters.[1] Sword and sorcery commonly overlaps with heroic fantasy."When it comes to hex crawling one or more factional powers are often the fixed points of 'law of the land' on the map. A good example of this is the minor witch queen or wizard that has carved out their own section of the map. These sorts of factions are the bread & butter for Adventurer,Conqueror, King & the game handles this sort of dark & dangerous figures quite nice as they make very portions of a campaign and even sub adventures unto themselves. Again this is where ACK's handles and excels at this sort of a campaign. What we're talking about today is where the Hexcrawl is actually driving the campaign itself. How to Hexcrawl From  Taskboy Games is a really good primer on just this sort of a game campaign. It gives a good solid overview & step by step guide for establishing and making your own hexcrawl for Labyrinth Lord. 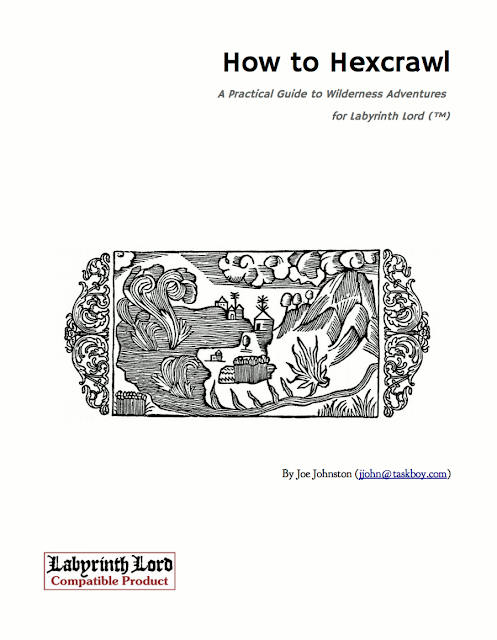 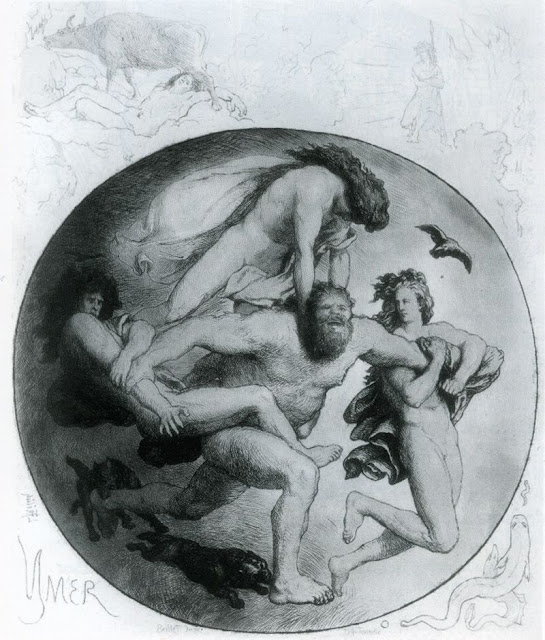 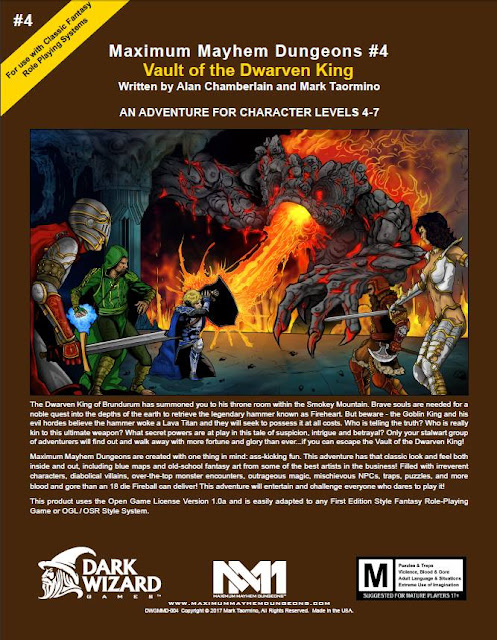 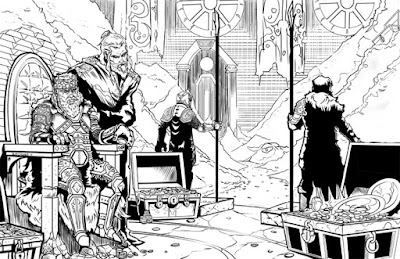 The fact that several of Vault artwork pieces convey exactly what the players wanted worked in my favor & might connect up with an idea that I had. Its easily possible to place an adventure or gonzo setting  within a hex and still keep things moving along within a sword & sorcery game without completely and utterly destroying the entire mood of the campaign. This is something I'm going to have to keep in mind and I'm at the moment considering resurrecting the operatic campaign that my uncle did back in the Summer of '87.
Vault of the
Dwarven King Is Available
Right Here