So last night with headache on the boil, I closed down the internet & began to really think about some of the background of my fall AS&SH campaign. Part of this was to return to Leigh Brackett's The Citadel of Lost Ships. " Brackett's novelette "Citadel of Lost Ships" was the cover story in the March 1943 issue of Planet Stories"
'The Kraylens are a dying tribe, a scrap of old Venus, but Campbell is determined to help those that had helped him!' 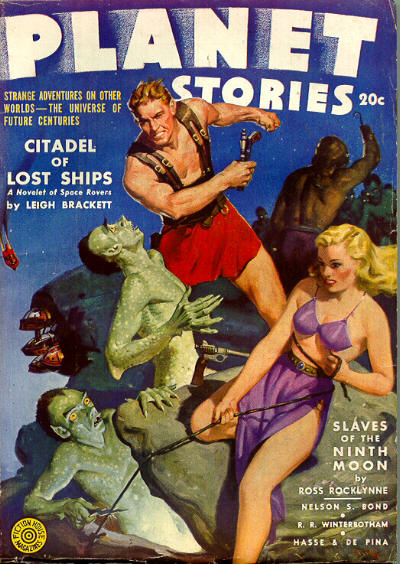 The novella is a mirror darkly for the Old West & the plight of the American Indian. Leigh Brackett wrote many Westerns in her time & was a pulp powerhouse writer. But I really started thinking about the secure place humanity would have among the solar system. What would happen if the 'older races' came from beyond the stars to reclaim their old home worlds. I've written about Adapting Leigh Brackett's 'The Citadel Of Lost Ships' Novella To The 'Old Venus' Campaign Setting
This is going to be a bit different because we're going to do a bit of exploiting and adapting of the future of the novella. I've said before reading this novel I kept expecting a shoggoth or two to show up whist I was reading this novel.  So if we start gazing at this novella through a Dungeons & Dragons lens then things start to get very interesting.
Looking deeper into the history of the Venusians there isn't simply one or two tribes of humanoids on Venus there are lots. If we take a stare  into the fetid swamp like world of Venus then we get a look into a world of lizard men tribes, fish men with gills, a world of dinosaurs or dinosaur like life forms,  & one very scared Terra Venusian Coalition government. Why are they so ready to off every last native Venus they can?
Because they'd stumbled upon the hidden Great Race of Yith city archives high in the mountains of the poles of Venus.


Earth wasn't the only place that the Great Race had its nippers into & Venusians had been teaching magic to humanity since the last cycle of the sinking of Atlantis. What is exactly has the Great Race fired up & heading out into its mass mind push at the end of the Shadow Out of Time?
"He discovers that the Yithians on Earth died out eons ago, their civilization destroyed by a rival, utterly alien pre-human race described as "half-polypous" creatures, but the Yithian minds will inhabit new bodies on Earth after humanity is long gone. His tenuously held sanity is challenged when he discovers the proof he seeks—and that not only do remains of the Yithians' past civilization still exist on earth, but also still remaining are those who destroyed them. It is also mentioned that the current appearance of the Yithians is not the original, but one acquired during a previous mass-projection of the minds of their race when disaster beckoned, leaving the original inhabitants to die in the bodies of the Yithians."
So what does this have to do with Brackett's novelette "Citadel of Lost Ships" ? Everything really because one of the 'doomed' Venusian chieftains let's slip some of the coming doom. Men had found resources that had previously used by other older races. 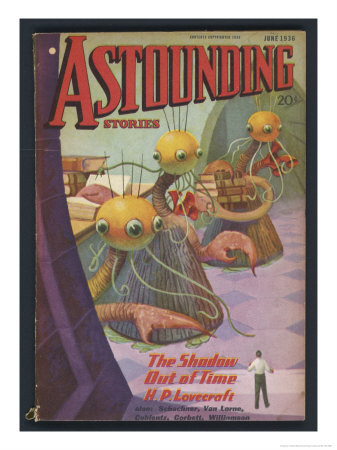 At some far distant point in the future of Old Earth the Hyperboreans returned according to Clark Ashton Smith's Hyperborea cycle & his Zothique cycles.
Venus fate in the far future is to be terraformed by a planet wide planet ecological life form that we get a solid look at in The Immeasurable Horror by Clark Ashton Smith.
This is one of the secrets that the  Terra Venusian Coalition government knows about but there are others. 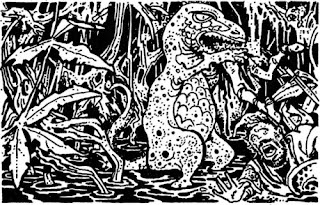 So surely there's no D&D connection with all of this? Actually there is in spades. The far future of this Venus is going to be a teeming world of incredibly dangerous life forms & various tribes of humanoids including various lizardmen, & Atlan Venusians and large swaths of Deep Ones who are devoted to Olhydra Princess of Evil Water Creatures. Babblers haunt the swamp lands & kelpie queens the shallow seas. X6 Quagmire is perfect  some deep swamp land encounters from the Serpent Peninsula for just this sort of a world and its for the  AD&D 1st edition game. X6 would require a bit of adaptation but could work quite nicely to get the feel and weirdness of the setting. 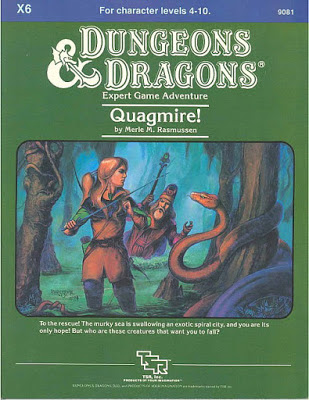 So what sorts of encounters would we expect in this far future  style of 'Old Venus'? I've worked up a few for you to add into your own home games. But don't be afraid to add in more alien elements to this sort of a campaign. We'll get into some of the weirder inhabitants in tomorrow's blog entry.