Legacy Of the Neo Ibbians For Your Old School Campaigns

'How is he doctor?,' the knight spoke with a candor of long years of friendship to the Hyperborean cleric. They had found the smuggler twenty miles from the wasteland of Arabia.
'Not good at all, the change has begun & there's nothing our temple can do for him'
'What do you recommend?'
'Take him out to the wasteland marshes to let him be with his own kind'
The voiceless half human thing on the bed thrashed its body as its own genetic code was overwritten by the powerful condition & curse that gripped it. Already its mind was filled with the song of  the great water lizard Bokrug.Anything human had long fled twelve hours ago & it was better it was taken to the marshlands near those damn ruins of Sarnath. How many more fools & fortune hunters would that damn place take?

"It is written on the brick cylinders of Kadatheron that the beings of Ib were in hue as green as the lake and the mists that rise above it; that they had bulging eyes, pouting, flabby lips, and curious ears, and were without voice."

-H.P. Lovecraft, "The Doom That Came To Sarnath"

When the stars of the insane came into position & the forbidden places came back into the old Earth the land & marshlands of Mnar came with it. So too did the ruins of  the city of Sarnath the damned. Those marshlands covered part of what was once the Arabian desert. They attracted fortune hunters by the score who recovered artifacts & relics. They found the ruins uninhabited,deserted, & easy pickings except for a giant statue of the water lizard Bokrug & several thousand strange alien columns dedicated to the deity scattered throughout the city. 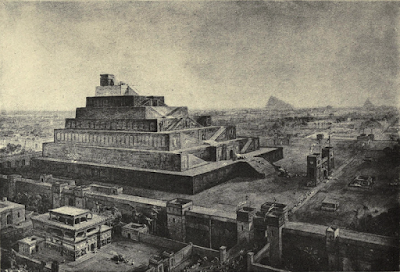 Exactly six hours after the first of the expeditions entering the city the first of the expedition began to exhibit the 'Ibbian condition.'  Skin began to turn translucent, jelly like, the victim can't speak nor cast spells, & only they can seem to communicate with one another. All forms of language, communication cease with the victims as the song of the water lizard replaces all. There have been a few insights from the clerics from Thraa, Ilarnek, and Kadatheron but many of these Hyperborean colonies are silent on the matter. They make the sign of doom, shake their heads moving on, & never speaking of the matter. Those of  the Deep One legacy make the sign of Dagon & say that they are now one with the water lizard.

Those who contract the condition of the Ibbians? They will murder,cause chaos, insanity, whatever it takes to join their own kind in the marshes of Saranth. They dance praises to the water lizard at certain times & bring down horrid curses on the heads of any who try to stop the expansion of their swamp lands. There has been a steady progression of twenty feet of swamp a year into the wastelands surrounding the city ruins. There are rumors among adventurers that the Ibbians are recruiting & expanding their ranks from among the local population. Artifacts, relics, etc. have been found in other ruins & dungeons in the surrounding areas where they don't belong and there are rumors of the water lizard's true priests a strange tadpole like form of Aboleth. These Aboleth have come down from Earth's moon where they have slept for eons until today. The human priests of Bokrug in the cities  shake their heads & mutter worried about the impact of the inhuman   hierarchy that has formed. There are factions clearly forming as the human thralls of the Aboleth have come into power & are able to direct the normally peaceful if insanely disturbing Ibians into violent armies.
Bokrug watches all with its alien amused reptilian continence ever watching & waiting for something.  Ruins of the Ibians have been found on Old Earth, in the swamps of Venus, remote corners of Mars, & especially in the underworld of Earth's moon. The ruins of Earth's moon have become active over the last twenty five years. 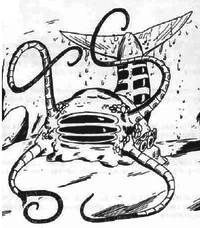 Aboleth artwork from the Monster Manual II copyright & trademark Wizards of the Coast used without permission.

Those adventurers who encounter artifacts or relics from Sarnath or associated with Ib must roll a save vs wands or spell to avoid the curse. Those who fail their save must have a cure light wounds, remove curse, or seek to atone at the nearest temple of Bokrug the water lizard. This must be done as soon as the sign of Ib appears on the skin of the victim within the first six hours. Symptoms of the curse are loss of all body hair, translucent skin, changing of the eyes, loss of voice, sanity, and finally the victim's mind is replaced with the collective hive mind song of Bokrug. Victims gain dark vision up to 30 feet & a claw attack for 1d4 points of damage.
Blessings & spells from a priest of Dagon will halt the effects of the curse for 1d6 days but steps must be taken to reverse the effects with a quest or a donation of 60,000 gold pieces to the nearest temple of Bokrug.
Neo Ibbians
No Encountered: 1d10
Alignment: Chaotic Evil

Size: M
Movement: 30
Dexterity 12
Armor Class:7
Hit Dice:2
No Attacks: 3 Claw/Claw/Bite
Damage: 1d4/1d4/1d4
Saving throw: 16
Morale: 10
Experience:100
Treasure: D
Special: Surprises on 4 in 6 chance because totally silent
Able to gate in 1d8 ghosts of Ib because of the connection to Sarnath
Bite has a 40% chance of passing on the Ibian curse
For every 30 Neo Ibbians there will be a cleric of Bokrug of third or forth level directing them.


I dreamed a dream: I stood upon a height,
A mountain's utmost eminence of snow.
Beholding ashen plains outflung below
To a far sea-horizon, dim and white.
Beneath the spectral sun's expiring light
The world lay shrouded in a deathly glow;
Its last fear-laden voice, a wind, came low;
The distant sea lay hushed, as with affright.

I watched, until the pale and flickering sun,
In agony and fierce despair, flamed high,
And shadow-slain, went out upon the gloom.
Then Night, that war of gulf-born Titans won,
Impended for a breath on wings of doom,
And through the air fell like a falling sky.
The Last Night  (1912)
by Clark Ashton Smith