I have a very strong connections with The Islands of Purple Haunted Putrescence, its a very flexible & dangerous adventure location/setting from the warped mind of Venger Satanis. A gonzo science fantasy setting with  liberal doses of  'R' rated  sex, gore, & lots of mayhem. All of which collide with the  concepts from H.P. Lovecraft's circle of Cthulhu mythos writers. But what are the islands themselves & the brand new factions, horrors, & the adventure kit? Wait what?! Didn't you know that the new Heavy Metal style magazine aesthetic adventure & expansion book The Battle For The Purple Islands has hit the shelves of Drivethrurpg 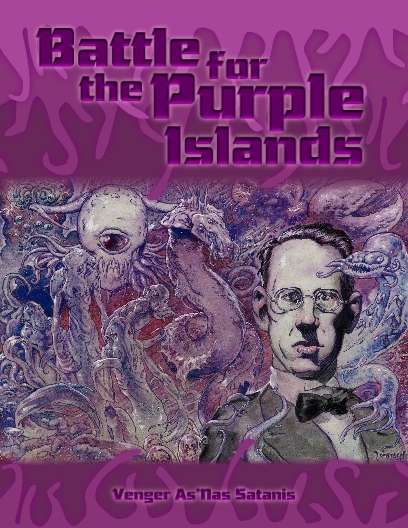 "What are they? A forbidden sanctuary of weirdness in the middle of the ocean. Three large islands next to
each other with dark purple sand, unbelievable creatures, and treasures untold. It’s a gonzo science fantasy paradise!
You see, much of the dark forces reigning supreme over the purple islands were vanquished by adventuring heroes. They came, they saw, and they slaughtered. A few years went by without incident.
Everyone started coming to the islands after things quieted down—colonists, anthropologists, big game hunters, sightseeing tourists, etc. But then obscene purple blasphemies deep within the islands began to resurface"

The islands have a bit of an overhaul & get back into the multi dimensional madness that them great as an adventure location in the first place. There's lots of reasons for your PC's to be on the islands and the book actually provides a number of random tables to give your characters a reason to be there. The whole affair clocks in at about twenty three or so pages. There's Venger's usual OSR & O5R vibe through out but in this case that's not a bad thing. Basically this book is a number of interconnected adventure plot points with factional information scattered throughout as much adventure as tool kit. Battle for The Islands of Purple Haunted Putrescence is Venger's Seventies & Early Eighties wet dream love letter with blood slime from 'Cannibal Holocaust' mixed with 'Stop Motion' dinosaurs from 'Land of The Lost'. 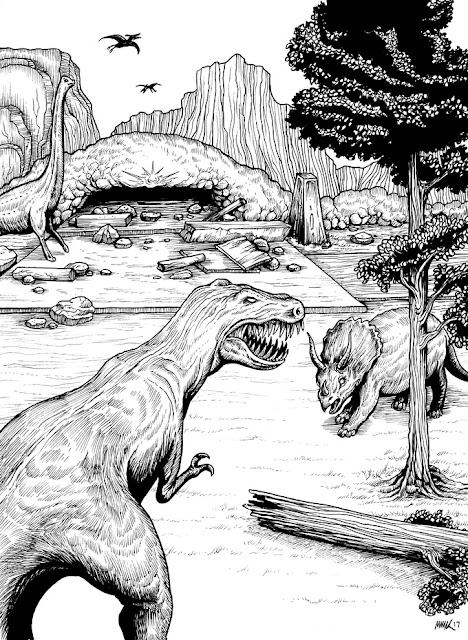 There are expansions of existing Islands of Purple Haunted Putrescence factions & new ones like 'Cannibal' tribes that will eat your PC's in heart beat, yes you do meet HP Lovecraft & yes there is an Alpha Blue adventure in for you Satanis veteran players. This is an extremely dangerous little book with lots of new pit falls & weirdness waiting for PC's. I'm talking new factions such as the Sorcerers of the Crescent Moon who are serpent men from another time just waiting for PC's. "When at least one of the purple moons is crescent, a snake-man sorcerer named H'ssan comes down from the mountain to steal warm-blooded humans. Under cover of darkness, H’ssan procures sacrifices for Xivirinthi, the ancient wyrm who lives inside the third moon."
Then you've got Talking Apes an in for Apes Victorious if you ever needed one! Why? Why not because everything is better with apes! "The purple islands allow for travel through time, space,
and other dimensions. So, it’s no wonder that certain areas of the jungle have been altered by the
quantum upheaval. Such changes bring civilizations from parallel worlds and alternate universes. Talking apes that walk upright like men is just one example.
The apes are part of a community called New Ape City. They carry machine guns, attempting to conquer the purple islands whenever they meet a force that threatens them—both physically and intellectually… radical ideas that go against their
religious-scientific belief system."
The ones you really don't want to meet are the brotherhood of the Unquiet Void, "A religious order calling themselves Brotherhood of the Unquiet Void devote themselves to those outer
abominations whose slime drips down from another universe, a universe of throbbing, twitching, screaming
flesh, gory and insane and spilling out into the unreachable darkness. The brotherhood worships
entities that hail from such places, and they have a leader named Kaion Vasus" Sort of a combination of the underdwellers from Battle For The Planet of the Apes & what happens to the world population in the film In The Mouth of Madness. These are not folks you want to invite over for supper. Then there's encounters with Lovecraft younger & older(don't ask). Lots of encounter tables for hex crawling across the islands. This is where the book shines of OSR style games especially if your into own a couple of OSR retroclone systems and want to expand your players adventuring! This also takes place in a timeless setting meaning that this is the book your going to want to pick up to introduce new players to the gonzo Lovecraftian sleazy jungle dripping action of The Islands of Purple Haunted Putrescence.
Is Battle For The Islands of Purple Haunted Putrescence worth the five dollar price tag? In a word yes, even if you don't own the original then Battle is your entry level drug for the weird science fantasy setting. This book brings home the setting and there are several tables that should have been in the original book. Your not paying twice for same setting folks this book has lots and lots of new material that isn't the 'special features' that ended up on the cutting room floor. Instead this is an add on book for the setting. Which leads into the next question should there be another book in the Purple Haunted Putrescence setting series of books? In a word yes.
If your into the All Night Long USA style gonzo cheese and weirdness of Venger Satanis's science fantasy setting then this is book for you. Will I be using it in future and upcoming games? In a word yes!
But this isn't a perfect book, I wanted more awesomeness and cult crazy gonzo adventure but this is a gateway & continuation book. In this alone the book sustains and in some points exceeds its goals. I'd say an even five out of five for purple haunted weirdness!