The Forgotten Jules Verne Novel - Off on A Comet

"Gallia, that touches the Earth in its flight and collects a few small chunks of it. The disaster occurs on January 1 of the year 188x in the area around Gibraltar. On the territory that is carried away by the comet there remain a total of thirty-six people of French, English, Spanish and Russian nationality. These people do not realize at first what has happened, and consider the collision an earthquake."

Today its Jules Verne's birthday & once again its a harried day of sewing machine repair & work. Scrambling to get everything done & yet its one of those days were we're thinking about Appendix 'S' inspiration & in this case Jules Verne's 'Off on a Comet' which appeared in Amazing Stories Volume 01 Number 01 (April 1926). 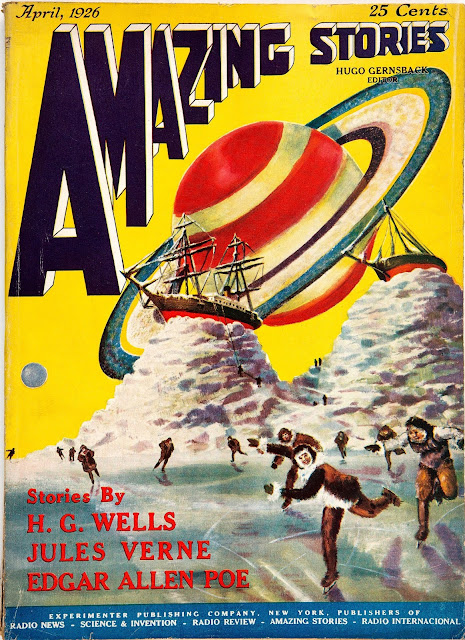 Now right off let's address the  anti Semitic content of the book version of  Jules Verne's 'Off on a Comet'  instead this is the magazine English translation which doesn't contain any of that content. Any of the American or English traslations don't contain any of that material according to the wiki entry; "From the beginning Verne had problems with this novel.[10] Originally he intended that Gallia would crash into the earth, killing all on board. This may have been the motivation for naming the hero "Servadac" with the mirror of the French word cadavres ("corpses"), predicting all would die on the "return". His publisher Hetzel would not accept this however, given the large juvenile readership in his monthly magazine, and Verne was forced to graft a rather unsatisfying ending onto the story, allowing the inhabitants of Gallia to escape the crash in a balloon.

The first appearance in French was in the serial magazine Magasin d'éducation et de récréation [fr], commencing on 1 January 1877 and ending on 15 December 1877. It was in June 1877 when chapter 18 appeared with the introduction and description of Isac Hakhabut:

He was a man of fifty years, who looked sixty. Small, weakly, with eyes bright and false, a " busked nose, a yellowish beard and unkempt hair, large feet, hands long and hooked, he offered the well-known type of the German Jew, recognizable among all. This was the usurer with supple back-bone, flat-hearted, a clipper of coins and a skin-flint. Silver should attract such a being as the magnet attracts iron, and if this Shylock was allowed to pay himself from his debtor, he would certainly sell the flesh at retail. Besides, although a Jew originally, he made himself a Mahometan in Mahometan provinces, when his profit demanded it, and he would have been a pagan to gain more.

This prompted the chief rabbi of Paris, Zadoc Kahn, to write a letter to Hetzel, objecting that this material had no place in a magazine for young people. Hetzel and Verne co-signed a reply indicating they had no intention of offending anyone, and promising to make corrections in the next edition. However Verne left the salvage work to Hetzel, asking Hetzel at the end of the summer, "Have you arranged the affair of the Jews in Servadac?" The principal change was to replace "Jew" with "Isac" throughout, and to add "Christian countries" to those where Hakhabut plied his trade. The anti-semitic tone remained however, sales were lower than for other Verne books, and the American reprint houses saw little profit with only a single printing by George Munro in a newspaper format. Even the Hetzel revised version has never been translated into English, as both Victorian translations were made from the magazine version. This has caused some modern reviewers to unfairly criticize the early translators, assuming that they had inserted the anti-semitic material which Verne actually wrote."

The second part of the novel 'Off on a Comet' appeared in Amazing Stories Volume 01 Number 02 (May 1926).  And its a very sharp & telling satire of pre WWI affairs & politics in Europe during the time of Verne as much as its an adventure science fantasy novel. 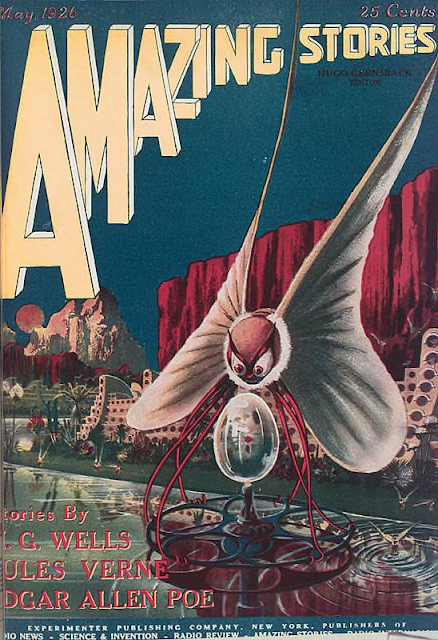 The plot is pure Jules Verne straight outta of the gate here according to the 'Off On A Comet' wiki entry which has a pretty solid break down; "The story starts with a comet called Gallia, that touches the Earth in its flight and collects a few small chunks of it. The disaster occurs on January 1 of the year 188x in the area around Gibraltar. On the territory that is carried away by the comet there remain a total of thirty-six people of French, English, Spanish and Russian nationality. These people do not realize at first what has happened, and consider the collision an earthquake.

They first notice weight loss: Captain Servadac's adjutant Ben Zoof, to his amazement, jumps twelve meters high. Zoof with Servadac also soon notice that the alternation of day and night is shortened to six hours, that east and west have changed sides, and that water begins to boil at 66 degrees Celsius, from which they rightly deduce that the atmosphere became thinner and pressure dropped. At the beginning of their stay in Gallia they notice the Earth with the Moon, but think it is an unknown planet. Other important information is obtained through their research expedition with a ship, which the comet also took.

During the voyage they discover a mountain chain blocking the sea, which they initially consider to be the Mediterranean Sea and then they find the island of Formentera (before the catastrophe a part of the Balearic Islands), where they find French astronomer Palmyrin Rosette, who helps them to solve all the mysterious phenomena. They are all on a comet which Rosette discovered by a year ago and predicted to be on a collision course with Earth, but no one believed the astronomer, because a layer of thick fog at the time prevented astronomical observations in other places.

A new research expedition determines the circumference of Gallia to be 2320 km. The mass of the comet is calculated by Rosette. He determines it at 209,346 billion tonnes. For the calculation he uses spring scales and forty 5-franc silver coins, the weight of which on earth equaled exactly one kilogram. However, the owner of the scales, Isaac Hakkabut, has rigged the instrument, so the results have to be cut by a quarter.

The involuntary travelers through the Solar system do not have any hope for long-term colonization of their new world, because it is lacking arable land. They feed themselves mainly with the animals that were left on the chunk carried away by Gallia. One strange phenomenon they meet is that the sea on the comet does not freeze, even though the temperature drops below the freezing point (believed to be due to the theory that a stagnant water surface resists freezing longer than when rippled by wind). Once a stone is thrown into the sea, the sea freezes in a few moments. The ice is completely smooth and allows skating and sleigh sailing.

Despite the dire situation in which the castaways find themselves, old power disputes from Earth continue on Gallia, because the French and English officers consider themselves the representatives of their respective governments. The object of their interest is for example previously Spanish Ceuta, which has become an island on the comet and which both parties start to consider an unclaimed territory. Captain Servadac therefore attempts to occupy Ceuta, without success. It turns out that the island has been occupied by Englishmen, who maintain a connection to their base at Gibraltar through an optical telegraph.

Gallia gets to an extreme point of its orbit and begins its return to Earth. In early November Rossete's refined calculations show that there will be a new collision with the Earth, exactly two years after the first, again on January 1. Therefore, the idea is conceived of leaving the comet at collision time in a balloon. The proposal is approved and the castaways make a balloon out of the sails of their ship. In mid-December there is an earthquake, in which Gallia partially falls apart and loses a fragment, which probably kills all Englishmen in Ceuta and Gibraltar. When on January 1 there is again a contact between the atmospheres of Gallia and Earth, the space castaways leave in the balloon and land safely two kilometers from Mostaganem in Algeria."

'Off On A Comet' Uses For The OSR 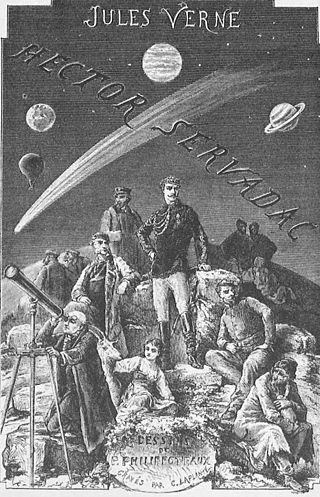 There is a ton for the dungeon master whose looking to put a group of unlikely characters together into a desparate situation. 'Off on a Comet' is an excellent example of a quickly put together Con game adventure or mini campaign. This makes it an excellent choice for both Swords & Wizardry or White Star. Perhaps both. The comet might also be an artifical vault put together by a past ancestor of  humanity for the eventual breakdown of humanity & society.
There's also the Lovecraftian idea that the comet isn't really comet at all but an artificial space craft  that has become unstuck on its mission. Option number two use the 'Off on a Comet' novel as a spring board for your imagination & use Swords & Wizardry, or Labyrinth Lord, & Mutant Future as a sorta of mini fantasy setting with perhaps hidden dungeons below the comet's surface. It worked for Hollywood &  it can work for you too.

Email ThisBlogThis!Share to TwitterShare to FacebookShare to Pinterest
Labels: 'Off on A Comet', Appendix S, Free Downloads, Jules Verne