"Tales of the cursed pyramid and the sleeping tomb of the Mummy Bride have long been a traveler’s tale, passed along by wayward explorers and greedy plunderers alike. Deep within the verdant jungles of the south, amidst a Green Hell of impenetrable jungle, savage cannibals and ancient myth, lies the shattered remnants of a once-powerful civilization and the terrible gods who ruled over them. Rumors swirl of untold riches and un-plundered magic for those brave (or foolish!) enough to claim it. Will your players survive… and what will be left of them?

The Jungle Tomb of the Mummy Bride is an old school, grindhouse-style combination of classic role playing adventure and devilishly-designed dungeons for levels 5-7, cram-packed with b-movie goodness to challenge even the most seasoned of adventurers. It’s a module that could only have been made in the primitive jungles of man… where life is cheap!" 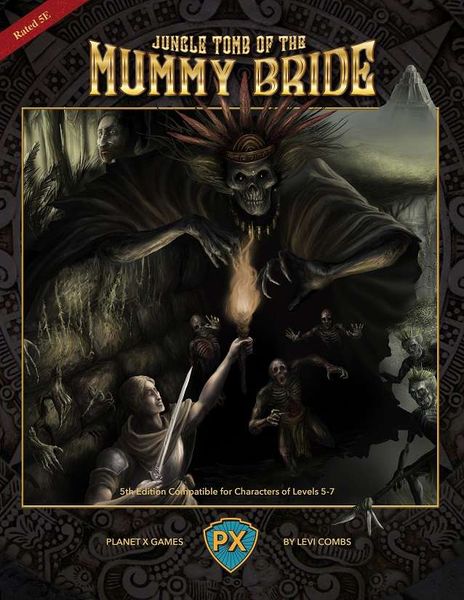 So for the last couple of years Levi Combs of Planet X Games has been friend of mine on social media for a few years. Let's drop into the fact that now there's a ton of pressure to get back into the swing of DMing as some of my player's schedules free up. And they want to go back over the fact that we started a Siege Engine hybrid game campaign last year. Now what's been on the table is Planet X Games's Jungle Tomb of the Mummy Bride. Yes Jungle Tomb of the Mummy Bride is for fifth edition  Dungeons & Dragons. But it should work fine with Castles & Crusades as well as Jason Vey's Amazing Adventures.

The appearance of a major lich queen upon a pre Thirties Earth is enough to bring every hero with a grudge against 'The Mummy's Bride'.  Make no mistake just because this is fifth edition its easily converted over to Castles & Crusades but the author makes this civet;" Jungle Tomb of the Mummy Bride is designed for a group of player characters who are levels 5-7. The lower level the party members are, the more players they probably need to survive. Any good adventuring group attempting to conquer the Mummy Bride’s tomb should have a rogue or character experienced at dealing with traps, a spell-slinger of arcane magic, and a trusty sword swingin’ meat shield. "
So already we can see the crossover between Earth & some other old school fantasy location. A campain trick that we've recently employed with War of the Worlds Godzilla 1898 Victorious rpg  campaign. But is our Jungle Tomb of the Mummy Bride from this Earth or someplace even more strange & dangerous.
Several reasons spring to mind why this will work:
Posted by Needles at 7:41 PM