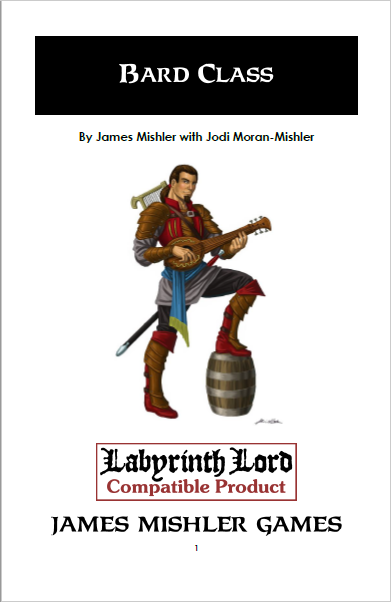 James Mishler Games sent a copy of Bard Class by James Mishler,  & Jodi Moran-Mishler. And its a really servicable Bard PC class. All of the old highlights are there from the classic Dungeons & Dragons sources. The place where this bard PC would really work?! In a classic Castles & Crusades campaign where you need a variant bard class. This is like the Swiss army knife of Bardic PC classes. The Bard Class  class clocks in at twenty eight pages & has a bit of that old school Dragon magazine baric magick tweaked with the usual Mishler family  OSR sleight of hand.All of the old favorites are here:

The College of Bards, rules for advancements, and rights and responsibilities of members.

The best part of Bard Class by James Mishler,  & Jodi Moran-Mishler is the fact that its open & totally usable at the table top level for a number of games such as Adventurer,Conqueror, King rpg, Castles & Crusades, & you as a player could even use it with White Star. This is a really nice & well thought out class for the OSR player & dungeon master. The Mishlers totally do a really good job with many of their games. And the Bard Class  is no exception. 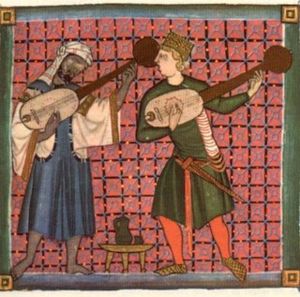 The Bard Class's   real appeal for me as a dungeon master was the six magna opera, the bardic equivalent of relics, which are some solid additions to the usual baric magic items & artifacts that I've seen. Bard Class has an actual reason for adventuring  &  these magic items which could be added into a campaign to give the bard player motivation & the basis for a quest. Everything within the  Bard Class fits together nicely as a tool box for the DM to add or subtract as needed for their games this is a good solid addition for the player's or the DM's tool box. The class is perfect but in my opinion needs a bit more padding & fluff for the PC class backgrounds. That's my only cavet with the entire class. Otherwise this up to the usual high grade  Mishler standards.