"At last! An opportunity to avert the threat to the little town of Saltmarsh! The real enemies have been identified - evil, cruel creatures, massed in force and viciously organized. Can the brave adventurers thwart this evil and ensure the safety of Saltmarsh?" So this is it! The enemies of Salt Marsh have been revealed and its time to put sword & sorcery to the test! Well, yes but hold on folks.  U3 The Final Enemy isn't your typical Eighty three AD&D adventure.
"The Final Enemy is an adventure module for the Advanced Dungeons & Dragons (AD&D) fantasy roleplaying game written by Dave Browne with Don Turnbull[1] set in the World of Greyhawk campaign setting." " 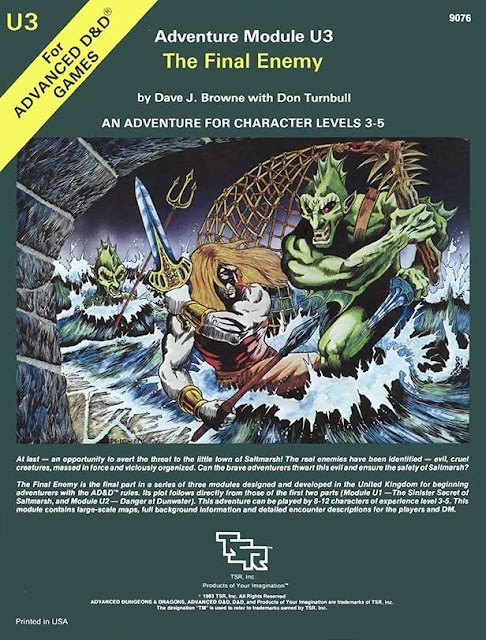 What the Final Enemy really is a rollicking forty eight page sword & sorcery raid on the lairs of the Deep Ones that actually parallels  Lovecraft's novella "The Shadow Over Innsmouth" (1931) & the military style raid on the town. The Final Enemy is designed for a group of 8-12 characters of levels 3-5,  a further thirty NPC's join the party if all of the other adventures in the Saltmarsh trilogy came off with out a hitch. 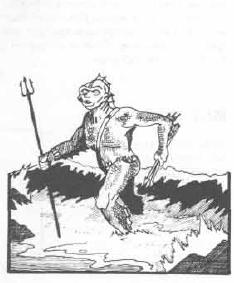 "DURING the winter of 1927-28 officials of the Federal government made a strange and secret investigation of certain conditions in the ancient Massachusetts seaport of Innsmouth. The public first learned of it in February, when a vast series of raids and arrests occurred, followed by the deliberate burning and dynamiting—under suitable precautions—of an enormous number of crumbling, worm-eaten, and supposedly empty houses along the abandoned waterfront. Uninquiring souls let this occurrence pass as one of the major clashes in a spasmodic war on liquor.
Keener news-followers, however, wondered at the prodigious number of arrests, the abnormally large force of men used in making them, and the secrecy surrounding the disposal of the prisoners. No trials, or even definite charges were reported; nor were any of the captives seen thereafter in the regular gaols of the nation. There were vague statements about disease and concentration camps, and later about dispersal in various naval and military prisons, but nothing positive ever developed. Innsmouth itself was left almost depopulated, and it is even now only beginning to show signs of a sluggishly revived existence.
Complaints from many liberal organizations were met with long confidential discussions, and representatives were taken on trips to certain camps and prisons. As a result, these societies became surprisingly passive and reticent. Newspaper men were harder to manage, but seemed largely to cooperate with the government in the end. Only one paper—a tabloid always discounted because of its wild policy—mentioned the deep diving submarine that discharged torpedoes downward in the marine abyss just beyond Devil Reef. That item, gathered by chance in a haunt of sailors, seemed indeed rather far-fetched; since the low, black reef lay a full mile and a half out from Innsmouth Harbour."
The Shadow Over Innsmouth HP Lovecraft 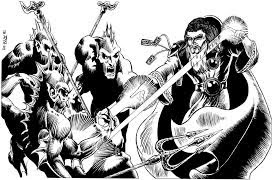 This isn't light weight adventure material here, this is full throttle old school adventure with the PC's going into the belly of the beast & getting into the upper tier Deep One's temples, dungeons, etc. all upon their own terms. There are going to be PC death & destruction galore.  We get hints about the sort of alien weirdness that PC's will be facing down in this adventure in HP Lovecraft's Dagon.
"I cannot think of the deep sea without shuddering at the nameless things that may at this very moment be crawling and floundering on its slimy bed, worshipping their ancient stone idols and carving their own detestable likenesses on submarine obelisks of water-soaked granite. I dream of a day when they may rise above the billows to drag down in their reeking talons the remnants of puny, war-exhausted mankind --of a day when the land shall sink, and the dark ocean floor shall ascend amidst universal pandemonium"
This adventure is blood soaked war underwater in the lair of one of the most dangerous & insidious races in the Lovecraft mythos. 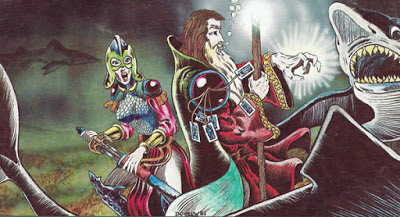 The Atlanteans in Astonishing Swordsmen & Sorcerers of Hyperborea are parodies of the full blooded and immortal Deep Ones that the PC's are going to facing in this adventure. Not only are these creatures incredibly dangerous but the U series had a grim and nasty streak that suited the climate of this underwater adventure location. The real problem becomes the fact that once the PC's have completed the 'U' series of adventures they might not be allowed to live. The Esoteric Order of Dagon's threat is going be fully evident to these adventurers and this is going to line up with events of The Mystery At Port Greely for AS&SH. The adventurers will be veterans & might need to hire other adventurers as stand ins or seconds to handle the threat of the Deep Ones.
"men—at least, a certain sort of men; though the creatures were shown disporting like fishes in the waters of some marine grotto, or paying homage at some monolithic shrine which appeared to be under the waves as well... [T]hey were damnably human in general outline despite webbed hands and feet, shockingly wide and flabby lips, glassy, bulging eyes, and other features less pleasant to recall. Curiously enough, they seemed to have been chiseled badly out of proportion with their scenic background; for one of the creatures was shown in the act of killing a whale represented as but little larger than himself"
HP Lovecraft Dagon 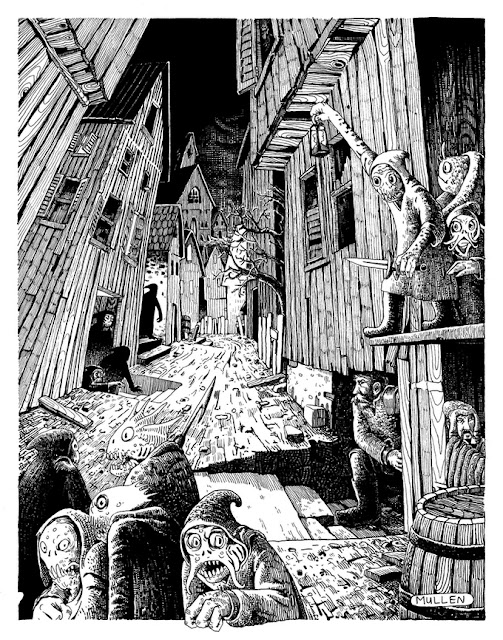 U3 The Final Enemy has some incredibly evocative and iconic monsters, encounters, and strange NPC's that can still surprise jaded players of Advanced Dungeons and Dragons. This is one of the other strengths of the U series, that no matter how many times you play it there is more going on under the hood then most folks expect and its different every time. U3 The Final Enemy isn't the end of the threat its only the beginning as the PC's can then branch off into the 'D' series after The Mystery At Port Greely. The Descent Into The Depths of the Earth offers exploration into the more dangerous aspects an Underborea with a little work could make things very pulpy & really horrid for PC's. So if you've completed the 'U' series count those coins, spend your experience, & get ready for the real danger!


There are a few things that the 'U' series does for PC's and U3 The Final Enemy has that old school feel in spades:
Posted by Needles at 8:04 AM