"The power of prophecy is given to few. Wise are they who guard this gift well, for those who thirst after such knowledge are not always men of principle.

Bastion of destiny, the Tower of the Heavens stands silhouetted against the star-studded night sky. From within his darkened observatory, perched like an eyrie on the highest turret, a figure in white charts the course of a shooting-star as it disappears behind the snow-capped peaks of the Tegefed mountains. The old man smiles grimly to himself; the event foretold has come to pass!

Power, glory, riches - it takes years to acquire them. The uncanny accuracy of their predictions has brought all these and more to the sages of the Tower of the Heavens. But what is hard to win is often easier to lose, and the future of the tower now hangs in the balance." 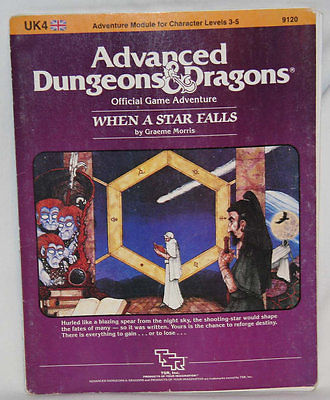 There are weird tale like D&D adventures & then there's When a Star Falls which many dungeon masters, players, & fans consider to be Graeme Morris finest adventure hands down. The adventure is for PC's level 3–5 but this adventure is for a lot of players. Your going to need six to ten experienced players for this one because it involves some interesting old school twists & turns. In fact many of the elements of When A Star Falls feels like it came straight out a mix of a Clark Ashton Smith Weird Tales story & bits of a Celtic mythological tale. "The PCs have an encounter with a monster called a memory web on the moors south-east of the Tegefed mountains, and learn of a falling star that reached the earth. They are encouraged to find it and bring it to Shalfey, an Elder Sage of the Tower of the Heavens." Yes, these are not your PC's memories but its the way that the adventure unfolds in its own way that makes it stand out. 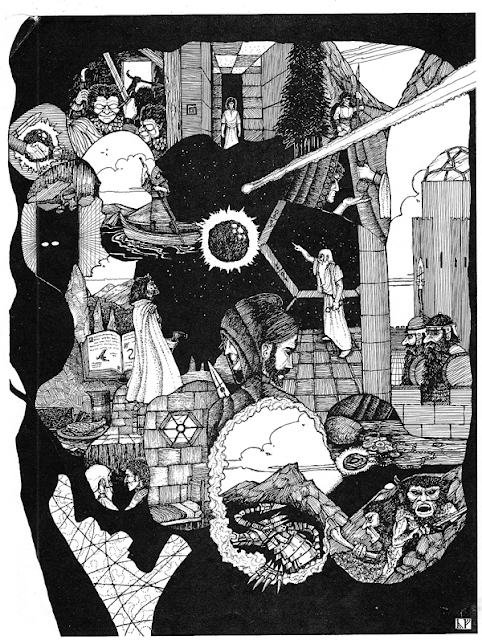 The PC's are going to have their work cut out with this one because their dealing with several notables from the Advanced Dungeons & Dragons first edition Fiend Folio. Derro,  Sverfneblin with their own agenda  and dangerous clerics with their own agendas are some of the elements of Graeme Morris at his best. Here's one of the things about UK4 that many dungeon masters don't realize. When A Star Falls is set within its own generic D&D setting. This means that you could place it anywhere that you want to as the Dungeon Master. You've got huge lairs of the Derro and extensive bases of the Sverfneblin. This element of UK 4 gives the whole module a very Weird Tales and pulpy feel.

It means that you as the dungeon master could use this module to create your own version of Astonishing Swordsmen & Sorcerers of Hyperborea's Underborea on your own terms. The Derro especially get an extensive fleshing out & are especially nasty in this adventure. But I know what your thinking, AS&SH has a lot of weird & twisted machinery. Well, the
Sverfneblin have that gadgets & technology that would put a gnome to shame and then some. In fact given their more then slightly twisted appearance their right in line with the maggot spawn of AS&SH and proper mythology.

One reviewer Chris Hunter of Imagine magazine noted of UK 4 ,"an "excessive use" of non-standard monsters (i.e. those from the Fiend Folio and Monster Manual II)". I have to say that this is one of the perfect reasons why I love the UK TSR series of modules. Not only are they of exceptional quality but they make use of some the best of the Fiend Folio monsters. This means that the players will not be expecting this roaster of old school fiends at the table. They'll be in for a complete shock when these NPC's come to spoil their fun. But there are other reasons too. Everything you need to run UK4 is self contained within the thirty two pages in a clear, concise package that can provide the DM with a complete blue print for a self contained dungeon challenge & old school experience. Make no mistake this is a heavily plot driven module and with a bit of work could be used in a complete sword & sorcery setting. So how would this module be used within the Hyperborea setting?

The dungeon master needs to take When A Star Falls & put it smack into the heart of the Keltic people's lands on Hyperborea. The adventure is so uniquely TSR U.K. that it echos with those classic D&D elements & quite nicely fits into the area's elements described in the Referee's Guide. On the whole many of the monsters, adventure elements, etc. all fit the area of the Keltics without exception and set things up for further delves in the area. But beware that the DM is going to need more then a handful of players to deal with everything presented in When A Star Falls. Your going to need ideally perhaps seven or eight players at least to get the most mileage out of this old school classic. Note that there is some very deadly play in some of the encounters of UK4 that could result in TPK's. 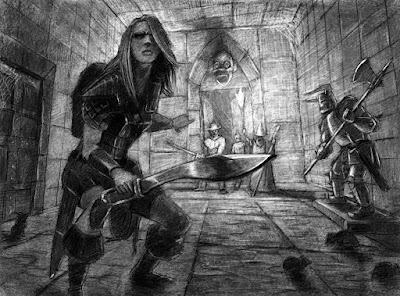 UK4 could be used to mold and tailor the Underborea setting  into something weird, dangerous, whimsically alien & yet deadly as some of the Weird Tale's author's classic material. There's a feel here of classic Celtic or Welsh otherworldly underworld elements in U.K. 4 that can be used as a framework for the DM to create their own underworld setting for AS&SH. This might even rely on some of the lesser known Fiend Folio monsters for something classically old school unique.
Here are ten reasons why UK4 When a Star Falls By Graeme Morris works for old school campaign play: