U1 The Sinster Secret of Salt Marsh Actual Play Event 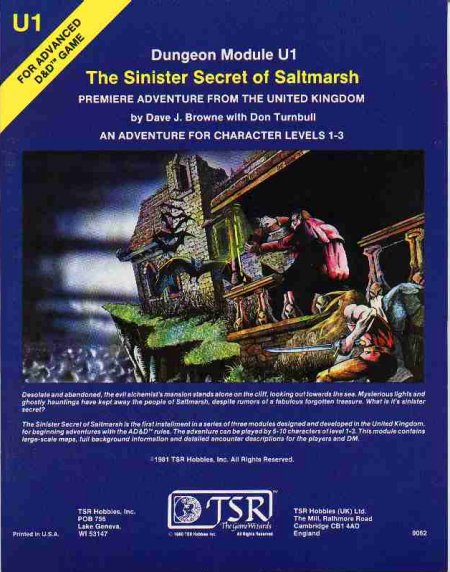 Today I got my revenge on Steve & his crew by running them through UK1 The Sinister Secret of Salt Marsh using the Atonishing Swordsmen & Sorcerers of Hyperborea rpg as the engine for today's game. There was a sword & sorcery feel today's game as the echoes of Port Greely for AS&SH's adventure were scattered through today's events. 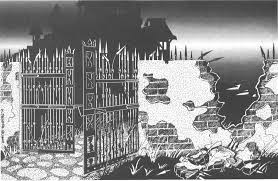 So today was U1 Sinister Secret of Saltmash adapted for the Astonishing Swordsmen & Sorcerers of Hyperborea first edition game. This module took about ninety percent of my Sunday & I've used the U series of module as the openers for events of the Mystery At Port Greely before.
"The scenario is the first of the Underwater (U) series of modules set in Saltmarsh, and details a ghostly ship and the haunted mansion of an evil alchemist"
I kept the bare bones of the module but we've got weapons being smuggled into Saltmarsh. The legacy of a twisted undead black alchemist with ties to the Lizard Men/Deep Ones being exploited.
"Desolate and abandoned, the evil alchemist's mansion stands alone on the cliff, looking out towards the sea. Mysterious lights and ghostly hauntings have kept away the people of Saltmarsh, despite rumors of fabulous forgotten treasure. What is its sinister secret?" 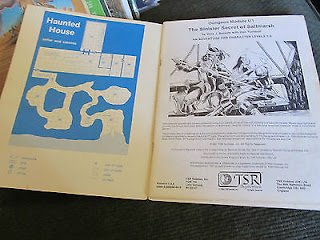 Today the players found some of the cargo of the Sea Witch was strange & sinister super science relics from a cache of Hyperborean technology from long before the Green Death. There was a map of the Forgotten Fane of The Coiled Goddess adventure in there as well. A hook for a future exploration of that nearby lost fragment of Hyperborea.  So why the Sinister Secret of Salt Marsh? Well,because it has just the RIGHT mix of problem solving and bad-guy fighting. It's also low level enough where the events and ideas of the module can be molded and fitted into the AS&SH mode of play. In today's adventure you've got events being molded through human agents and their witch cults. 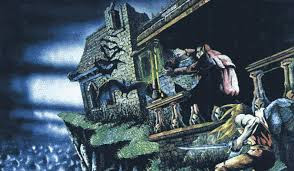 The PC's got caught right in the center between the smugglers & the hide out of the witch cult as the connections between the two are pretty tight going all of the way back to the time before the Green Death. The PC know that several ships belonging to the Fishmongers’ Guild have gone missing over the last couple of months. And the the peculiar town of Port Greely was renowned as a prolific exporter of crustaceans but now the  Greely lobster men severed all ties with outside partners. This is all tied in with the background of U1. The fish supply to the capital of Hyperborea in dangerous peril and more violent happenings? This looks like a prime opportunity for the PC's to make some gold pieces & get involved in the events leading up to Danger At Dunwater.


The gritty feel of the adventure, how it handles magic and some of its low level adventure elements are ideally suited for AS&SH. The players managed to get through
The Haunted House and Sea Ghost parts of U1. There were more then few close calls in today's adventure but the whole thing had the air of a set up for events that will be forth coming.
There are a few reasons why U1 The Sinister Secret Of Saltmarsh still works:

"I have an odd craving to whisper about those few frightful hours in that ill-rumoured and evilly shadowed seaport of death and blasphemous abnormality. The mere telling helps me to restore confidence in my own faculties; to reassure myself that I was not simply the first to succumb to a contagious nightmare hallucination. It helps me, too, in making up my mind regarding a certain terrible step which lies ahead of me."
HP Lovecraft The Shadow Over Insmouth.
Posted by Needles at 10:34 PM