So last night after way too many beers & a phone call at about two A.M. with Steve a friend of mine whose a long haul trucker & AD&D first edition player. I some how ended up watching some of the original Saturday morning  Land of the Lost television shows from '74.When your four years old 'Land of The Lost' is awesome especially given the dinosaurs, the Sleestak, 'the lost city', and many a Saturday morning was spent at High Bluff with the Marshal family. According to the Wiki entry;"Land of the Lost (1974–1976) is a children's adventure television series created (though uncredited) by David Gerrold and produced by Sid and Marty Krofft, who co-developed the series with Allan Foshko. During its original run, it was broadcast on the NBC television network"


Land of the Lost is a hex crawl pure & simple, each twenty two minute episode reveals more & more of the pocket universe of Land of the Lost. In the episode 'Follow that Dinosaur' we get background on the time lost castaways that for centuries and background on the Sleestak who were named for an American  Revolutionary war officer that Private Peter Koenig a private didn't like. Rick Marshall (Spencer Milligan) and his teenage children Will (Wesley Eure) and Holly (Kathy Coleman) are perfect examples of the family of adventurers dynamic that I've used countless times. So instead of a bunch of strangers who meet in a tavern you get a family each with fulfilling the adventurer roles. Much later on we got  Uncle Jack Marshal who takes over the family after his brother exits the land by causing a time paradox in which trapped the Marshals in the first place. This was all because of Enik who whose people the Sleestak are descended from; they are the degenerate remains of the Altrusian people. The Altrusians are a reptilian species whose abilities with planar, time, and dimensional technology is really impressive. Its they're time & space gates that honeycomb the Land. The Altrusian's time space technology is actually part of what regulates the eco & weather systems of the Land of the Lost. The crystal control tables and time space pylons have showed up in many games over the years. 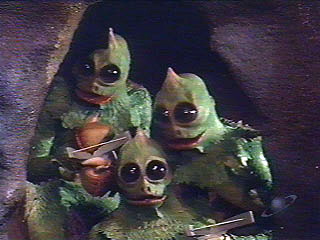 Land of the Lost boasted some really impressive science fiction talent behind some of the episodes with  David Gerrolds the writer of the 'Star Trek' episode the  'Trouble With Tribbles' on board as story editor but who comes to flesh out the entire Land of The Lost universe as the series progresses. There's an internal consistency to the mythology & background of Land of the Lost. Part of the reason is the science fiction talent that was brought in according to Wiki ;"A number of well-respected writers in the science fiction field contributed scripts to the series (mostly in the first and second seasons), including Larry Niven,[6] Theodore Sturgeon,[6][7] Ben Bova,[6] and Norman Spinrad, and a number of people involved with Star Trek, such as Dorothy "D.C." Fontana,[6] Walter Koenig,[6][8][9] and David Gerrold.[6] Gerrold, Niven, and Fontana also contributed commentaries to the DVD of the first season."  But for a four year old kid it was the dinosaurs and megafauna  which if you grew up in the 1970's. This show had a bit of everything for the Seventies kid, UFO's, time space gates, dinosaurs,etc. And as a D&D dungeon master I mined the hell out of this show from the early Eighties through my running Carcosa, Land of The Lost elements keep showing up. But if your want to put together your own OSR Land of the Lost game campaign there are some descent resources. 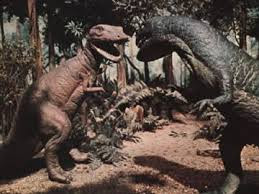 Wiki has a whole bunch of resources that can be used the entry on the original 1974 television show is pretty good.
List of Land of the Lost episodes has quite a few quick nods and bobs for a time line for the show. The real meat for putting together & creating NPC's is the Land of the Lost characters and species entry which has everything to throw into a quick mix or one shot adventure. For artifacts & treasure the Land of the Lost geography and technology entry is one to look at which can give you everything you need to stock the 'lost city of the Sleestaks'
See you on the other side of the time space gate kids! 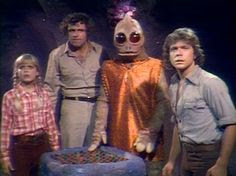 Note that this blog entry is meant for educational and entertainment purposes only this blog entry is not meant as challenge or violation of the copyrights of the creators or current holders of the land of the lost trade mark or copyrights.
Posted by Needles at 8:25 AM