Good morning I haven't been around since last night & woke up with 'Universal Exploits' sitting in my e-mail this morning. Well let's start at the top, Universal Exploits was clocked in at sixty pages on Venger Satanis's Kickstarter. Supposedly the Universal Exploits was going to be sixty pages;" So, what's going to be in the book?  Around 60 pages (8.5" x 11") of new adventure scenarios, technology, weapons, drugs, NPCs, adversaries, monsters, galactic factions, Federation sub-committees, a section on taxes, tariffs, and free trade, time travel, random tables galore, alternatives to temporary Health after sexual encounters, alien cities, and even more fleshy envelope-pushing artwork!"
Well what we've gotten is a one hundred and nine page book with lots of random PC tables, fully fleshed out adventures, wall to wall NPC's, a great Alpha Blue character sheet, &  fully detailed star ship plans by Monkey Blood Designs. Oh and about that fleshy envelop pushing artwork its there. 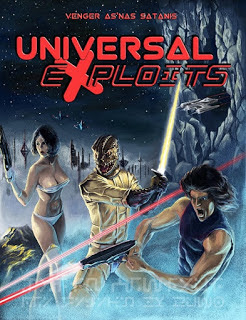 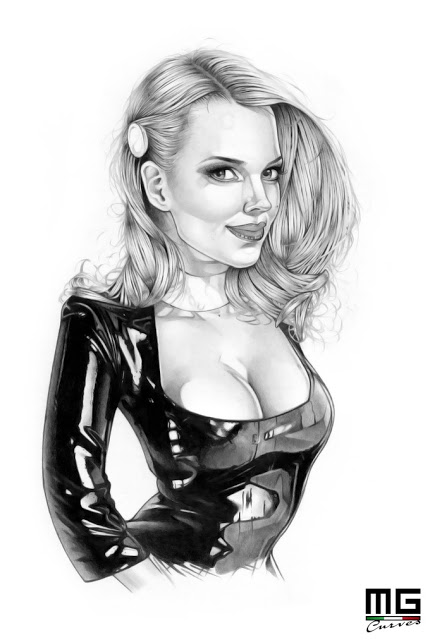 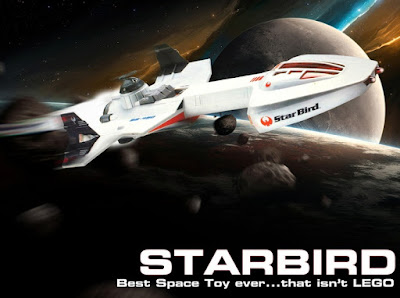 There's some artwork which breaks up the sections in Universal Exploits & its not a bad way of handling the various sections of the book. Just in case I haven't mentioned it, Universal Exploits actually has a fully laid out index that cross references everything in the book and this is one busy book as we shall see. We get an adventure/NPC location that we can drop right into the middle of an Alpha Blue game & its a place that's needed;"Revan 111 is a space station devoted to peace in the Ustrata galaxy, though it occasionally wanders outside Ustrata into neighboring galaxies. Hanging at the central corridor between a wild assortment of alien factions on a thousand different worlds, Revan 111 is a sanctuary, safe haven, and last refuge for the dispossessed, disenfranchised, revolutionaries, activists, libertarians, ordinary space scum, and all those beings with a reason to hide."
You see Revan 111 is a place with secrets, NPC's with hidden agendas, and a space station swimming with all kinds of trouble waiting to grab your PC's by the throat and haul them into a side adventure they never wanted. A few random tables breath life into Revan 111 & its a solid adventure location to drag & drop into a game of Alpha Blue. We get two tables that work really well for Alpha Blue for NPC's one is the cultural bias table and the after party table. The after party table is perfect for PC's who stumble into a party they shouldn't have. Then we get into random tables for generating religious orders and NPC figures. Followed by more random motives for NPC spacers.
A brief outline and structure rules for running & constructing adventures in Alpha Blue is next which slides into the Universal Exploits adventure set up and the big bad 'the Federation' According to Universal Exploits;"In this book, Universal Exploits, one enemy takes center stage - the Federation! It's an oppressive, corrupt regime, ever growing and always grasping for more and more power. The Federation is a foreboding oligarchy consisting of the ultra-wealthy, bureaucrats, noble houses, assassination guilds, telepaths, zedis, and the military industrial complex. The Federation crushes resistance wherever it sees it… and the Federation believes the seeds of revolution are everywhere" A basic take off on 'Star Wars Empire' with shades of other space opera governments. The whole adventure centers around :"a shipment of Purple Prizm 36 hour ago, but it never arrived. That wouldn't be so bad, but the previous shipment also never made it to the Q'tha homeworld. Neither of them is sure who was supposed to deliver the refreshing and hallucinogenic grape drink, except for the company's name - Sun Belt Distribution." Scattered through out the Universal Exploits book are advertisements for Purple Prizm with really pornographic European style artwork. Its a similar style to many of the West End Star Wars rpg adverts from way back in the 90's but much raunchier. I don't want to give the whole thing away but Universal Exploits parodies the Cola Wars from the Eighties, lots of sci fi show references and in jokes, and generally doesn't take itself seriously for an instant. This isn't a bad thing because of the very nature of the Alpha Blue Game. 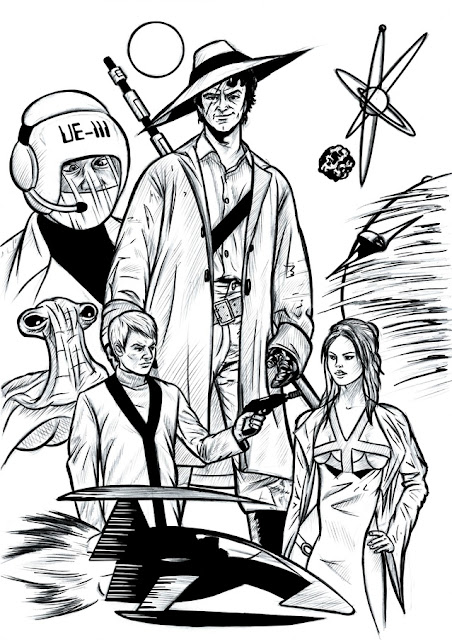 Then finally we get another adventure in the form of Pussy Chasers The Legend of Oral along with some other adventure locations. Even as part of the Universal Exploits adventure we get another adventure setting location in the form of the 'Red Hologram District'; "a red hologram district (or RHD) can expect an eyeful of prostitutes, pimps, drug pushers, thugs, gangsters, dope fiends, tattoo artists, strippers,
contraband merchants, and slimy run-down theaters with sticky floors that play exploitation and grindhouse
favorites such as Vanessa Swallows the Star Beast Whole, Space Dogs from Reservoir Gore, and Anal Blasters come for Princess Sex Candy part 5!" And yes there is another table for what happens in the red hologram district'.
There are several parodies elements mixed into this adventure referencing Star Trek, Star Wars, Flash Gordon, the Buck Rogers television show along with Grabba the Butt's Pleasure Palace. This is an adventure location unto itself with random motives tables for Grabba & random NPC generation tables. Finally there are a series of Land Rush tables, these are actually really useful. According to Venger; "This is a bit of an afterthought, but I wanted to include a series of random tables for determining the nature of certain territories - planets, planetoids, moons, asteroids, space islands, and even entire systems." Well here's the thing these land rush tables slide right into the domain rules for Alpha Blue. They add a nice little bit of useful DM material to Alpha Blue and another dimension to the game.  Finally we get maps and diagrams by Glynn Seal of Monkey Blood Designs of the UX Star Bird, The Milk Shake class star ship( great PC ship btw), and Grabba's Palace. 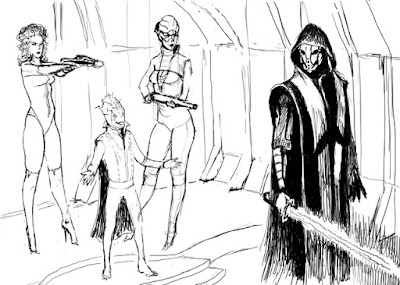 Universal Exploits is an essential book about as essential to the Alpha Blue rpg system as the Girls Gone Rogue book perhaps more so. This is a very busy rpg book that crams lots and lots options into itself. This book is part rules option book for Alpha Blue, adventure resource book, random table book, finally adventure book with several optional adventure locations, and the added resource of domain level play. The fact is that a professional editor could have paired this book in places & took a far more steady hand with it. Universal Exploits is perhaps one of the best books I've seen the Alpha Blue but it could have been even more fantastic. The problem is that the book is too busy & it tries to cover far too much material in the Alpha Blue Rpg system. Even with that said I'd say I think that Venger Satanis gives his buyers, audience & backers their money's worth! Universal Exploits has tons of material to work with for adventure construction for Alpha Blue and actual on the table play. There's enough material in 'Universal Exploits' that could easily be ported over into any OSR style science fiction game for even more sci fi fantasy awesomeness. Four out of five stars for the Universal Exploits book! Grab this one when it comes out!