"The boat touched a beach of fine, pearly sand, before I began to wonder where I was and to speculate concerning the shores I had reached. I knew that we had been hundreds of miles southwest of Easter Island on the night of the fire, in a part of the Pacific where there is no other land; and certainly this couldn't be Easter Island. What, then, could it be? I realized with a sort of shock that I must have found something not on any charted course or geological map."

I was able to get together with player and his family today to test out a couple of theories about about old school island play adventure encounters using a resource I've been itching to use. 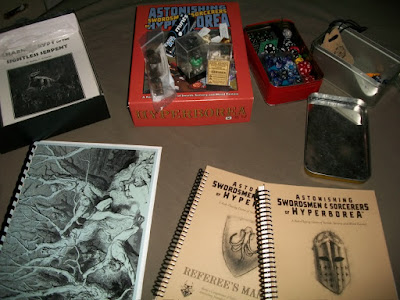 Thanks to the Tyler family today I got a chance to try out an 'experiment' in old school gaming. Well, sort of it was more like I got together with the Tylers for a bit of Astonishing  Swordsmen and Sorcerers of Hyperborea and bit of old school gaming but I didn't have whole bunch of time to prepare so I pulled out an old rpg convention trick out of my bag. This was running an isolated island location but this wasn't one that I had written. Way back in AFS magazine #3 there was an article, about  adapting 'The Uncharted Isle' by Clark Ashton Smith to Adventure & Setting, by Jason Zavoda.
The island, its environs, and the town are all steeped in weird sword & sorcery fiction. The article basically outlines the island, its environs, the town, the NPC Lovecraftian deity, and the weird situation that the PC's suddenly find themselves embroiled in.
So what does this have to do with World of the Lost by Rafael Chandler? Well two of the Tyler clan wanted to play sea wrecked PC's from the fictional city of Khirima. Since this was going to be several  ship wrecked crews on the island I was alright with that. 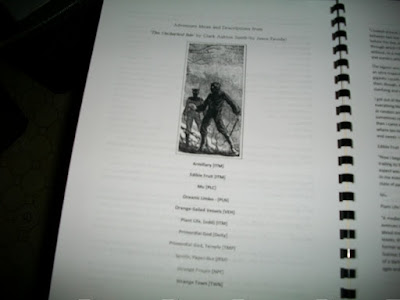 There were several advantages to this style of adventure we ended up with two 2nd level warrior women from the fictional African nation who were time lost as well as ship wrecked. There were three characters among six who were taken from World of the Lost two warriors 2nd level and a male sorcerer. William and his brother were playing thieves from Hyperborea 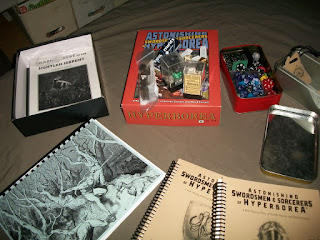 Our final player Brian was playing a knight from Dark Albion and half of the game adventure was spent making sure that none of the player's PC's killed each other. They each woke up washed up on the shore and the exploration began in earnest. Everything about the island is wrong from the position of the sun, the geography of the island itself, the creatures on the island, the sky, the stars, the ocean, and then the story just keeps going.

“More and more decisively, I knew that there was something wrong:  I felt an eerie confusion, a weird bewilderment, like one who has been cast away on the shores of an alien planet; and it seemed to me that I was separated from my former life, and from everything I had ever known…”
Clark Aston Smith 'The Unknown Isle'  It took a great deal of cooperation and know how on the players parts to get out of the situation. There are plenty of ways to get out out of the ship wreck situation that the PC's  find themselves in but also plenty of ways to die. They managed to get off the isle today but were ready to kill me for making the language barrier an adventure element. This adventure is actually a prequel to the Temple of the Book adventure. See below.

Further Deep Background on Clark Aston Smith's  Uncharted Isle
Once again I get called into a spur of the moment game with a bunch of other friend's players. Is this a problem no not at all. I was reading a couple of the short stories of Clark Aston Smith the other night and after writing up The Temple of the Book I wanted to write up or play through a prequel. AFS magazine happened to be nearby with the article by Jason Zavoda and there's also an excellent blog entry about this short story. Both of these served very nicely to keep things moving tonight. 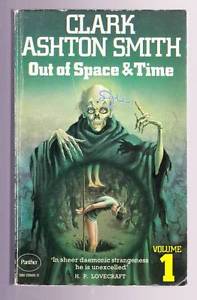 This keep things moving right along up to the point when the PC's built a raft and escaped the isle and its weird environs but does that mean that the PC's will be making it too the Temple of the Book? Not necessarily, for I didn't say that this was a direct prequel to the events of the Temple at all there could be other  stops and more yet to go before they might just might find their way to their respective homes.


I've often used ship wrecks uncharted islands, lost worlds, and other worldly locations for this sort of a quick mini adventure for conventions and other old school play style adventures. This sort of situation makes for a very good bridge gap game to get a mix of PC styles. It also makes an excellent bridge into the classic Isle of Dread adventure another old favorite with whom readers of this blog know my keen obsession and compulsion with. But that dear friends is a blog entry for another day. Will be getting together again to play another adventure in this OSR chain? Well that will depend upon my players schedules and if we're all going to be in Connecticut again at the same time. Only time will tell. 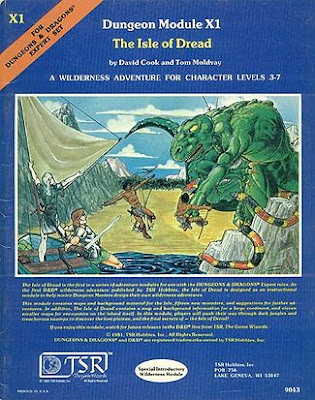