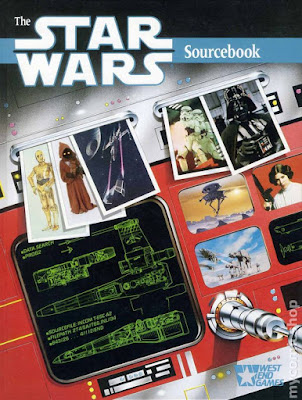 I can remember the day I saw one of my favorite rpg from West End games in Dragon magazine in '87. The blurb really caught my attention and plugged into my kid Star Wars fever', "Experience the vast scope and sweeping power of the greatest space fantasy of all time!
Struggle against the awesome might of the evil galactic Empire, fly faster-than-light spacecraft, trade blaster fire with Imperial stormtroopers, fight lightsaber duels, and tap the mystic Force which binds all living things together. Explore a galaxy of a billion suns, each with wonders and dangers of its own — a universe of dire peril, where Rebels fight desperately against the eternal night of Imperial oppression.
In Star Wars: The Roleplaying Game, you will face overwhelming odds, hard choices, impossible challenges — but if you meet them bravely, you will triumph, for the Force is with you always!"
I think I mowed about maybe seven or eight lawns to afford this bad boy and I've still got my first edition Star Wars rpg book. 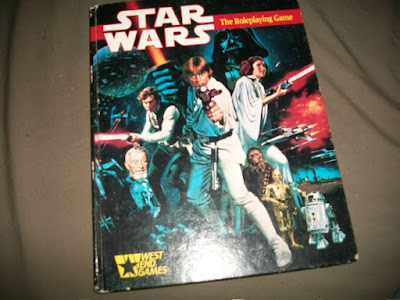 May the fourth has passed without incident except for the usual load of internet related Star Wars memes and it brought back certain strains of memory and nostalgia. It also brought back a certain back straightening memory. You see way back when I got seven friends together who were life long Star Wars fans and we got together to play the game. They were life long Star Wars fans who knew the canon like the back of their hands and that's where the trouble began. See at the time Dragonlance was in full swing and I was involved in a friend's home campaign. This is where I learned the difference between approaches in world building between a 'canned' setting and an open setting like 'Greyhawk'. I was used to 'Blackmoor' & 'Greyhawk' where you could make your mark on the campaign setting from the get go. Dragonlance established canon, history, setting, and more. It was a lesson that would come around in spades with Forgotten Realms but that is a story for another blog post.
All of a sudden during my first planned Star Wars game the arguments started about 'official Star Wars canon' straight out of the gate. The game degraded as they often did back then. What was I going to do. Well the answer was I got sick with the flu. That might have ended that right there.
Star Wars, Samurai,VHS  & Shakespeare


Things picked up with an unexpected visit and a brand new campaign direction. After the flu got a bit well, iffy. 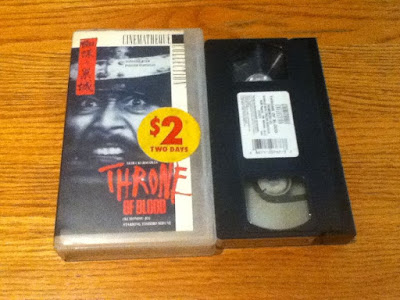 The flu was a big deal for a kid like me, I've got a touch now of asthma but back then it put me down for a long time. This insured that I had friends who brought me my homework and such from school. And that's where one of my mentors comes into it. See back then we had video stores that did some great rentals and one I used to hang out in and I became fast friends with one of the part time workers. His daughter went to  my school at the time and he brought me homework that day. Michael noticed my copy of  West End's Star Wars and went back out to his car for a copy of a 1957 Japanese film co-written and directed by Akira Kurosawa called Throne of Blood. Now the reason why I was watching Throne of Blood was simple I had a report on William Shakespeare's play Macbeth, Throne of Blood follows and retells the drama in a whole new light by transporting it to feudal Japan. Its vicious film and very well done and  it became a favorite of mine.
The plot follows Macbeth in its own way but there a lot of subtle differences but here's important points of the back plot;"Generals Miki and Washizu are Samurai commanders under a local lord, Lord Tsuzuki, who reigns in the castle of the Spider's Web Forest. After defeating the lord's enemies in battle, they return to Tsuzuki's castle. On their way through the thick forest surrounding the castle, they meet a spirit, who foretells their future. The spirit tells them that today Washizu will be named Lord of the Northern Garrison and Miki will now be commander of the first fortress. She then foretells that Washizu will eventually become Lord of Spiderweb Castle, and finally she tells Miki that his son will also become lord of the castle."

At the time I was watching a hell of a lot of low rent sci fi movies and Throne of Blood's plot fit right into the science fantasy background of Stars Wars. Everything came together with this two page spread in the game. 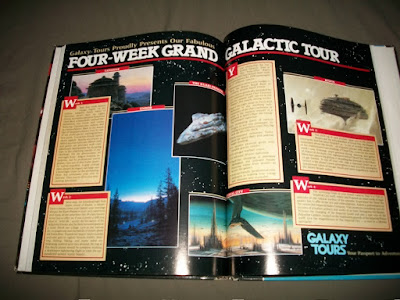 The PC's were agents on the Galaxy Tours for various reasons who were aboard a luxury ship passing through the Tsuzuki system. An an asteroid collision puts the whole party in an escape pod rocketing down onto a back water planet. Where a dark side spirit has taken a hold of the local warlord and only his loyal R2 unit knows the extent of his descent into murder, and madness. The PC's had to figure out the tissue thin murder plot and help to restore the rightful heir to the throne of Spiderweb fortress. 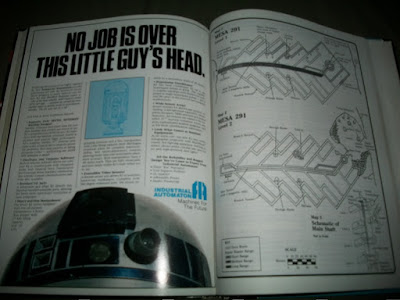 The R2 unit later became the backbone of this campaign which expanded into the Tsuzuki system which would later appear appear in my Wasteworld rpg in a totally new incarnation.
The  Tsuzuki system is a backwater steeped in dark side mythology, misplaced alliances, bad deals, and lots and lots of blood. 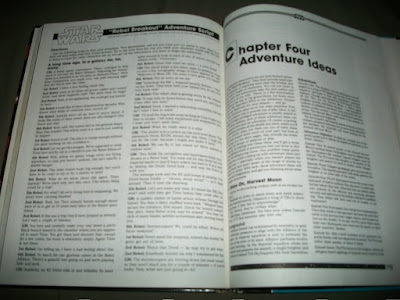 Back to the Star Wars Rpg, the Tsuzuki system campaign became one of my longest running and sustained rpg campaigns ever. It lasted three and half years and bits of it are still floating in my back brain to this day.
Rules, Settings, Worlds & Mayhem 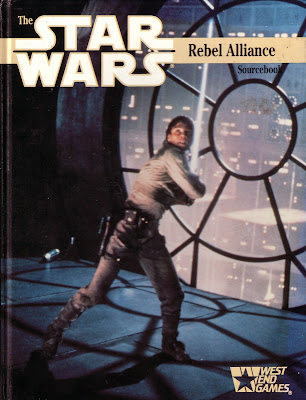 The West End Star Wars was one of my first smacking into the weight & back history of a fictional universe. Fictional settings & universes are something that people get very, very, attached to. It was also one of the times when departing from the official canon also meant blazing your own path. For some people this can be a very scary proposition. It also makes one of the real differences between new school and old school games for me. New school games seem to have worlds and settings already built into the system itself, this includes Vampire the Masquerade, Rifts, and too some extent West Ends Star Wars rpg.  I can hear the teeth grinding and whatnot but let's talk about second edition AD&D for a moment. They had all of those wonderful worlds such as Ravenloft, Dark Sun, Forgotten Realms, etc. All of these are premade world settings and that's not a bad thing and they do allow a DM to colour outside the lines to some extent. 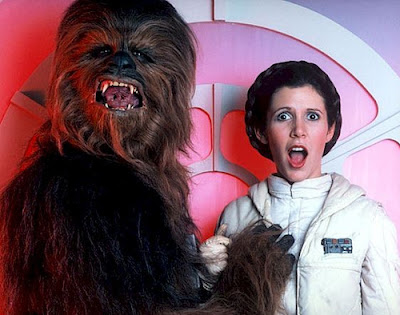 But there's also a huge number of differences with old school products such as Greyhawk, Blackmoor, Arduin, etc. That's the fact that its really up to the DM to fill as much or as little  of the campaign setting as they'd like. Here are ten things that I've learned about world building from West End Games Star Wars Rpg that I've applied to OSR campaign building :