“There have been times when only a hair's-breadth has intervened betwixt myself and the seething devil-ridden world of madness; for the hideous knowledge, the horror- blackened memories which I have carried so long, were never meant to be borne by the human intellect. ”
― Clark Ashton Smith


Today was a one rule book and one adventure kinda day, make no mistake about Lamentations of the Flame Princess its a Gothic horror game at its core.And so the challenge today was to take that one rulebook and create an adventure encounter around it for the Astonishing Swordsmen & Sorcerers of Hyperborea campaign. For three reasons, one to make sure I was up on the rules of the game, two to prove a point that the rule book is as much a game reference device and three to show that sword and sorcery has many pulpy angles to it. And what's with the Blind Dead fan book? We'll get to that in a moment. 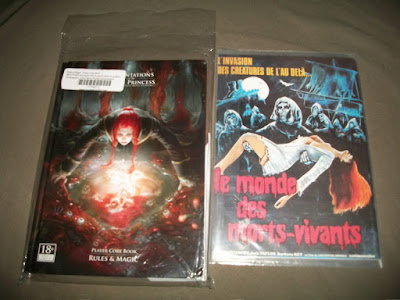 First thing is about the Lamentations of the Flame Princess game, there is a ton of resources that the rule book brings to the table. This includes the fact that most often in many of the recent supplements real life history plays a part in the adventure or sourcebook. A great example of this 'No Salvation For Witches' which uses some real world history and a very dangerous series of encounters for the PC's. But what does this have to with our adventure construction example today? Well let's talk about, "The Poor Fellow-Soldiers of Christ and of the Temple of Solomon (Latin: Pauperes commilitones Christi Templique Salomonici), commonly known as the Knights Templar, the Order of Solomon's Temple (French: Ordre du Temple or Templiers) or simply as Templars, were among the wealthiest and most powerful of the Western Christian military orders[4] and were prominent actors in Christian finance. The organisation existed for nearly two centuries during the Middle Ages." 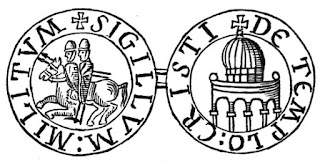 No other group has been used in conspiracy theory, quasi reality archeology history television shows and horror movies. Specifically one of my all time favorites The Blind Dead series but the problem? Well one of my players who came to pick me arrived a bit early for my game this afternoon. 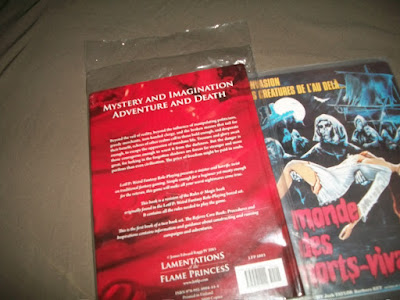 So is this going to be a problem? Because already our noisy player thinks he knows what's in store? Umm no I actually left these books out for that very purpose. All is not as it seems with our Templar connection. And what does this all have to do with Hyperborea?

The Lost Temple Of The  Book
History & Background 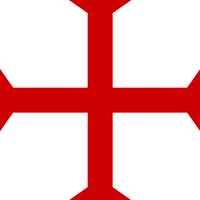 The following is all fiction and the set up for the adventure during  The Battle of Hattin which took place on July 4, 1187, between the Crusader Kingdom of Jerusalem and the forces of the Kurdish Ayyubid sultan Salah ad-Din, known in the West as Saladin,certain artifacts and holy treasures were removed by the Templars and taken back to a small church  on the banks of Cyprus. Among these were the lost pages of the Greek text of the Necronomicon. This version contains a version of the summoning spell from the Lamentations of the Flame Princess game. One of the knights was examining the text and misspoke summoning something hideous beyond the ken of men.

The slaughter was hideous beyond mere words and the church upon its isolated little isle was removed from our local space time continuum until now. The church along with its occupants have recently surfaced upon the oceans of Hyperborea. A few gold coins and some other trinkets have washed up on some of the local shores and already adventurers are hearing the tales of the lost treasure and its mysterious temple.
So the set up is simple the knights are undead and their are other more horrific things waiting for a party of adventurers in the church. The place is cursed and exists outside of space and time. It will only be on Hyperborea for 1d20 days and the hours are ticking which any wizard can figure out by watching the skies for 1d10 minutes above the church. 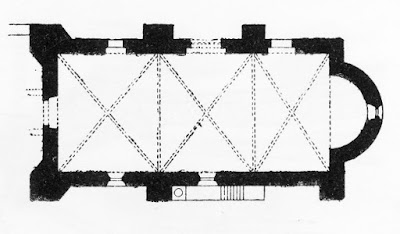 So what's in the church is going to depend upon the size of the party of adventurers, there will be 1d10 zombie Templar knights. But there will also be at least 1d6 or more weird monsters all generated using the summoning spell from the  LotFP Rules & Magic Free Version.
The challenge of course was to create this whole encounter using the one book from the ground up. What's behind the events here? I would suggest using the demon generator from No Salvation For Witches. The things in that book would give a party a run for their money. 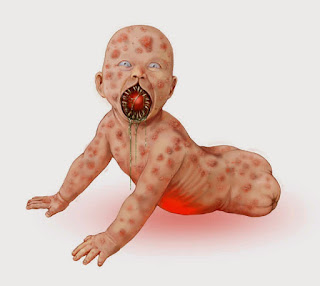 So here's what I came up with for a random Treasure list for The Lost Temple. The temple encounter could also be used as a funnel for a Dungeon Crawl Classics game party set up as fishermen,or locals row out to the island.
1D20 Random Treasures of
The Lost Temple Of  The Book
Posted by Needles at 6:49 PM