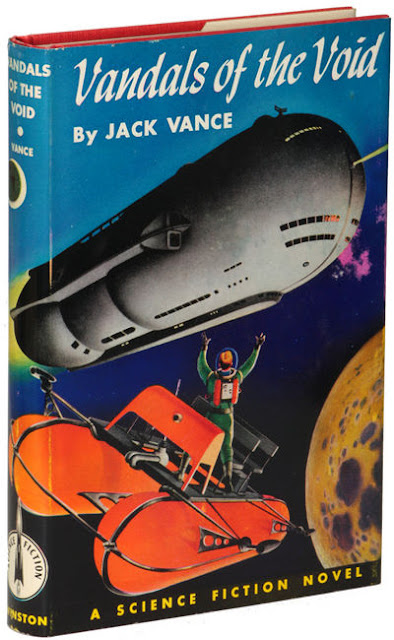 Today we're going to be talking about space pirates and an old juvenile science fiction novel called Vandals of the Void. This juvenile science fiction novel came out in 1953 by science fiction and fantasy master Jack Vance. The novel takes place place in the futuristic year of 1985 and the clashes between the Space Navy and the space pirates framed against the life lessons of Dick Murdock. This is the first in a series of loosely related novels set with Vance's Gaean Reach region of space which according to Wiki:"
The Gaean Reach includes all worlds colonized by humans, among which trade and travel flow freely for the most part. Its name apparently means "the range (reach) of [the people from] Earth (Gaea)"; it could also be derived from Old English 'rice' (pronounced reech-e), meaning 'realm' (cf. German Reich). Some of these worlds are advanced and cosmopolitan, such as Alphanor; others, like Thamber, are inhabited by shipwrecked and forgotten people, who have reverted to feudalism. Some, like the world of Wyst in the Alastor Cluster, are undeniably strange in their culture and customs.
The period of the Gaean Reach spans several centuries, if not millennia, at an indeterminate time in the future. Specific dates are given in the early books of the Demon Princes series, but not in the others. The human civilization in the Demon Princes is the Oikumene, which can be seen as a precursor to or variant of the Gaean Reach. The Reach is mentioned in the three Alastor books, the Cadwal Chronicles, Ports of Call and Lurulu. Singleton works are also included, such as Emphyrio, Night Lamp, Maske: Thaery and The Gray Prince, where it is defined as follows: "the Gaean Reach encompasses a perceptible fraction of the galaxy. Trade routes thread space like capillaries in living tissue; thousands of worlds have been colonized, each different from every other, each working its specific change upon those men who live there. Never has the human race been less homogenous.""

Vandals of the Void (1953.Winston)  Jack Vance is a teen science novel set during the far future of 1985 and outlines the struggles between the space marines of the Space Navy and the struggles of space pirates. There is some rip roaring stuff here to mine for old school gaming.This includes several factions of pirates, NPC's for the Space Navy and more. The plot is classic space opera and if your looking for more then a rip roaring pulpy adventure you might be disappointed.  In fact bits and pieces of Vandals of the Void reminded me of the Star Frontiers module from the Knight Hawks box set called Warriors of the White Light. Your PC is a member of a crew aboard a space patrol vessel hunting pirates and dealing with some major spacer adventure issues. 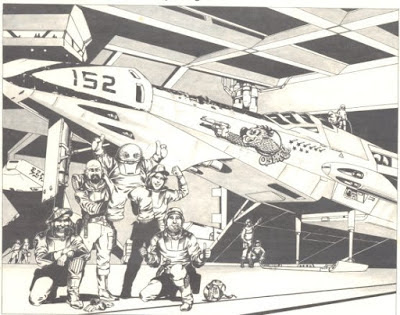 Vandals takes the main hero into the belly of the beast and takes several minor twists even though this is a young adult book there are several deaths and some very interesting space battles. The novel takes the reader into the heart of the space pirate's operation and while its not widely regarded among certain circles of science fiction fans I found it to be a damn fun read and the pirates are a great adventure hook to use in your own old school games. Personally I would update the novel's plot to Star Frontiers or a retroclone such as Stars Without Number and then set the whole affair loose on my players. 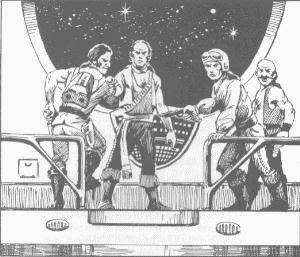 If your going to use Warriors of the White Light as the basis for a campaign touch stone then you can down load that right over here.  Your also going to need the Knight Hawk Rules which can be downloaded from the same web address for free as well.
From Google Books:

In the Foreword, writing fifty years ago, the author describes his vision of a new space age; he predicts that by 1985 the age of space piracy will begin and that a Space Navy will be established, speculating that some of his younger readers might participate: "I hope that none of you serve with the pirates .. The pay might not be so good in the Space Navy, but you'll live longer".
Much of the material is a great overview of the Space Navy and their ilk. The ideals here are pure science fiction 'boys' goodness. Very much in the vein of the times. But there is some great stuff to mine especially the space ship descriptions, locations, gadgets, and much more.

Much of the material is incredibly dated but that really is part of the charm of the book. This is perfect retro future gaming goodness. Its definitely written in Vance's style but highly curtailed for his 1950's teen audience.

Bits and pieces of it remind me of some WWII like situations that were still fresh in the minds of folks of the time. Gaming wise I can think of several retro science fiction clones that might use this material including : X plorers, Stars Without Number, and even Star Frontiers given the right 'Retro Future' treatment.
All in all its a very cool little free download and a great piece for mining for gaming.
Best of all its free! 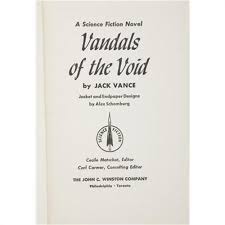