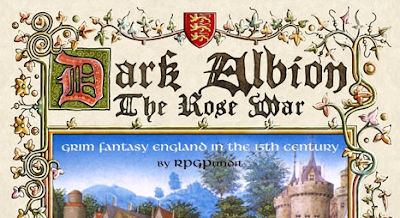 Blood, horror,war, English terror, Rome, and more is exactly the sort of thing that your going to find on the fields of an alternative historical England in Rpg Pundit's Dark Albion. Good evening kids, I'm taking off a bit of time to do a quick retrospective on one of last year's most evocative and weird historical setting books to come out. I'm talking about Dark Albion by By Dominique Crouzet, RPGPundit This book puts your characters front and center in an alternative Earth's War of the Roses setting right into the middle of England. But this isn't any England that you know, oh no this is a world of Gothic horror and a setting where the heroes can and might go from being no bodies to national heroes or vile villains possibly all in the same campaign.
This is domain game driven rpg in both setting sense and the sense that it drives adventures around the spokes of the history of the game's settings universe. Imagine if Rome had never given up England, magick is very real, dark things slink at the edges of Empire, and the throne is up for grabs as the events of the Rose War cascade around your PC's.
GRAB THE PDF RIGHT HERE 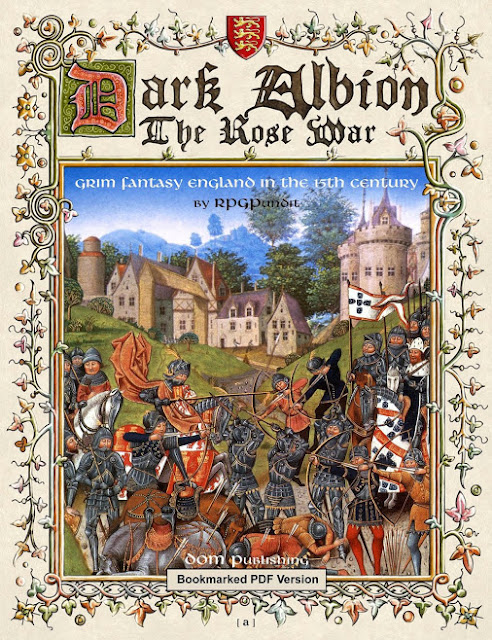 So is this a domain driven setting book? You can bet your behind it is! Here domain and station are everything and your PC's can be everything from knights, mercenaries, to adventurous souls who are ascending and threading their way through the pages of this alternative history setting. There are reasons why your party is adventuring and making a name for themselves in the world. Here's the dire events of the Rose War have taken a sinister turn and the cracks in the Empire are starting to show.
If your expecting the darkness to be there it is in both the interior belly of the beast of the setting and without as the forces of the world are watching the chaos of England with malevolent eyes. There are horrors outside of the edges of the world and they want to tear the place apart even as the Empire within England is striving to expand itself. 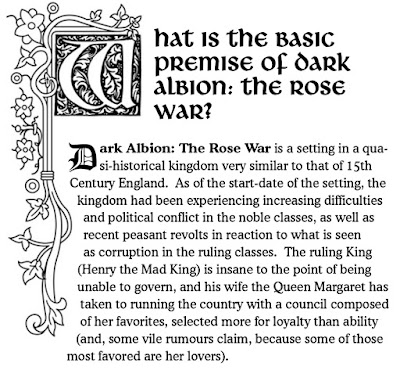 Dark Albion breaks two very old conventions of old school role playing, one is the domain as retirement or end game of adventurers and two is that lower level PC's can make a difference to the larger campaign world. The entire setting is one solidly constructed domain level adventure campaign setting  ripped apart by internal warfare & strife. This breeds all of the opportunities that PC's need to handle, exploit, and seek opportunities that will move them past their social rank and standing. Warfare and adventure breed opportunity as it feeds upon itself in Dark Albion. The second thing is that Dark Albion breaks the old school bollocks of lower level PC's not being able to affect change in the world around them. Because this setting is built upon the War of the Roses via an alternative Earth history conceit that Rome and not the Holy Roman Catholic church was one of the prime movers of history.This means there is plenty of opportunities for the DM to use the time lines of Dark Albion to make the setting their own. Even as the PC's are moving themselves through adventures,political intrigues and more as this is built right into the back end of  the character's stats via social rank. 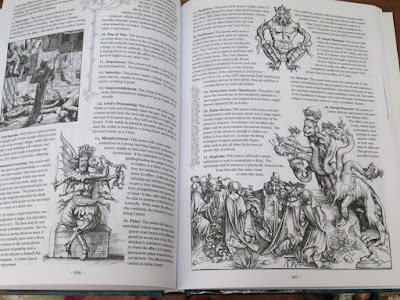 Right from day one in Dark Albion the PC's are going to be wheelers and dealers in the politics of the dark fantasy setting influencing their liege or expanding his influence. This gives  you have something with immediate benefit to the game's background goings on and this is an on going issue that will haunt or help your PC's as they try to navigate the events and weirdness of the War of the Roses as it unfolds.
When I say that Dark Albion is a all encompassing setting I mean it, this was and is a passion of the author and we've already got a basic adventure right in the pipeline to set up the PC's in their new setting. 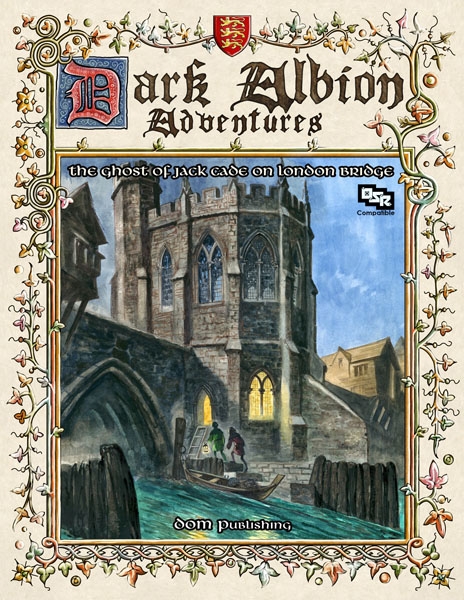 DAA1 - The Ghost of Jack Cade on London Bridge From  DOM Publishing
isn't your usual first level adventure. This is both investigation and has a bit of political goings on in the background as well; "This is a low level (i.e. intended for 1st level, probably newly created, characters) introductory adventure, that occurs on London Bridge. This is mostly an investigation adventure, without dungeon crawls (though several buildings may be explored). It would be typically run in a single 4-5 hours gaming session. This adventure will be perfect to set the mood of a Dark Albion campaign."
I've gotten a chance to read through this adventure and I would say to thread your party of players through this one very carefully and there is a chance if played wrong with some bad dice rolls murders, PC death, and dismemberment may result. Some of the conceits to remember with Dark Albion is that this isn't our world at all but one seen through the dark glass lens of fantasy and the fantastic with its feet firmly in the grounding of real world history. The setting book even gives this sort of commentary and then twists it around. This makes Dark Albion have the sort of weird almost real world history vibe so disconcerting in some respects. 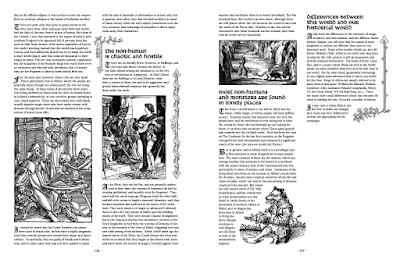 Here are ten o of my reasons why Dark Albion is highly regarded at my table:

Dark Albion is one of the best game setting books  of 2015 & its a solid background to set an OSR style campaign in, with the right group of players and a dungeon master this is a setting with the potential to keep you coming back to the table again and again.