Planet of Dinosaurs is an great old fashioned grind house movie. Its the type of film so bad its good. The basic plot goes something like this from wiki :
After a mechanical failure aboard the spaceship Odyssey, Captain Lee Norsythe (Louie Lawless) is forced to crash land on a planet with atmosphere and conditions much like that of Earth, although it is many light-years away. As the ship sinks into the lake that it landed in, communications officer Cindy (Mary Appleseth) realizes that she forgot the radio in the ship and attempts to retrieve it, with the assistance of fellow crew-member Chuck (Chuck Pennington). En route, Cindy is attacked and killed by an unidentified aquatic creature, prompting Chuck to return to shore without the radio.
Realizing that they are stranded, the remaining eight people aboard the ship decide that survival is their primary goal and begin to explore the planet that they have landed on. Derna Lee (Derna Wylde) quickly loses one of the laser guns that Mike (Max Thayer) had given her, leaving the stranded individuals with one less weapon. They eventually come across a Brontosaurus, which leads them to deduce that the planet is following a similar evolutionary track as Earth, but is millions of years younger. Later, Charlotte (Charlotte Spear) determines that the plant life, especially the berries, is poisonous. After another dinosaur encounter, Lee decides that the best option is to climb the mountains and reach a higher plateau, where he believes the large creatures will be unable to reach them
During the ascent, Nyla (Pamela Bottaro) slips and loses the entire supply of food rations, which Lee refuses to retrieve. In a cave higher up the mountain, Vice-President of Spaceways Incorporated Harvey Baylor (Harvey Shain) discovers a nest full of eggs. After stealing an egg, Harvey is attacked and killed by a Centrosaurus. Soon after, much to ship engineer Jim's (James Whitworth) dismay, Lee decides to halt the expedition and settle at what he considers to be a defensible area. Lee expects to hold out until they are rescued, but Jim believes them to be trapped forever on the planet, and advises that they begin a new civilization. Lee triumphs and the remaining crew begin to build a defensive stockade around a cave. After a few more encounters, including a giant spider and an Allosaurus, a large Tyrannosaurus arrives and kills Derna, demolishing the stockade in the process.
The crew finally agrees with Jim that the best way to survive is to kill the predator. Their first plan, devised by Lee, is to attempt to poison the dinosaur by smearing berries on a dead Polacanthus and leave it outside of the Tyrannosaurus's lair. The plan backfires when the beast attacks from behind, killing Mike. Jim's plan is to set up large, wooden stakes and coat them in the poison, then lure the predator into them. After some initial troubles, including a fight between the T. rex and Rhedosaurus, the plan works, killing theTyrannosaurus, which nearly takes Jim with it.
Years pass and the survivors have set up an agricultural settlement. Chuck and Charlotte now have a son.
Charlotte wonders if they will ever be rescued, to which Nyla comments that it does not seem important anymore.
Watch it Here
1d10 Random Encounter Table For The Lost Planet

Using Planet Of Dinosaurs For Your OSR Game 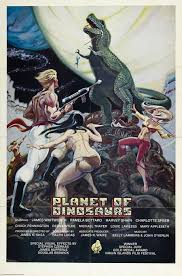 Planet of Dinosaurs might as well be set right within the Star Trek universe or a similar timeline. The technology of the Odyssey is made from the same thing as hundreds of other '70s grind house pictures. This also means its easily adaptable to your favorite retro clone game 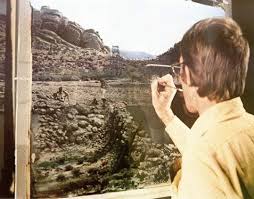 The encounter table is done tongue firmly in cheek & I'm not going to tell you that this isn't a horrible movie.The whole thing is worth watching for the stop motion. The characters in this are victims waiting to happen but the ideas put forth are notible for two reasons. One this is is an artificial planet seeded long ago by your favorite ancients. Two this easily works as an Isle of  Dread in Space. 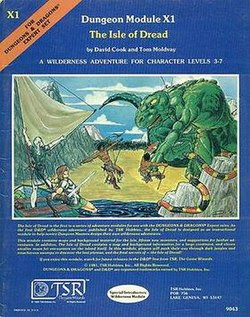 With Star Ships & Spacemen second edition coming out & Terminal Space already out the idea of a planet where you can set your favorite lost world adventure is very appealing.The Isle of Dread is meant to introduce players and Dungeon Masters familiar with only dungeon crawl-style adventures to wilderness exploration. THe same can be done with Planet of Dinosaurs. This movie/adventure idea works on a number of levels allowing the DM to set the difficulty for the PCs as needed.
The planet can be used as a base for a villain or as a location based adventure. Even as a Stars Without Number middle group between the gonzo & serious tones of  old school space adventure.
Further the planet might serve as a duck blind in space where your favorite alien god race has hidden a dungeon 22 mile long below the core. The chooses for adventure aren't too limited with the situation even if the movie isn't the greatest. The concept is still worth looking into in my opinion as a DM.