The Hmelatharchuro - The Fishermen From Space For The Adventurer, Conqueror, King rpg System & Astonishing Swordsmen & Sorcerers of Hyperborea

They have many names & over the countless centuries the Hmelatharchuro have been casting their adamantium nets across many worlds. They are powerful demonic jinn belonging to the evil courts of air & water respectively. They are vain but highly alien creatures who came to dominate weird realms between the planes of air & water after the Rebellion of Heaven. They are very sensitive about  their appearance and bored with immortality  began to gather the most intelligent and strongest specimens from the human race throughout history to serve them on their Islands of Lost Souls. 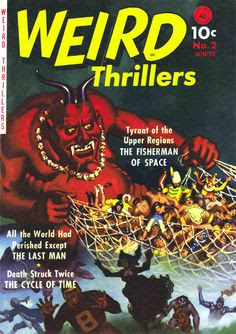 These islands  are protected by  never-ending storms which prevented the Fishermen's prisoners from escaping and mysteriously also from aging. The Fishermen themselves in the island's volcanoes and only leave their volcanoes to hunt for more captives which are trade to various otherworldly and alien beings. These islands of the lost are artificial freaks of natures balanced between the quasi elemental planes but being able to touch a wide variety of otherworldly & temporal locations. A treasure of a million worlds has been lost upon these islands worthless to their damned & immortal inhabitants. The Hmelatharchuro dwell within a maze of tunnels & chamber like rooms within their volcano lairs sustaining themselves on the hot gases & weird radiations of their alien environment only emerging to hunt throughout time and space for more captives for their sick collections and trades.

The Hmelatharchuro
% in Lair : 50%
Dungeon Encounter: Solitary
Wilderness Encounter Solitary
Alignment: Chaotic
Movement: 90'(30')
Fly:240' (80') Dexterity: 14
Armor Class: 6
Hit Dice:10***
Attacks: 1 Fist
Damage 2d8
Save: F15
Morale:+5
Treasure Type: R,N
XP:2,950
Fishermen From Space are an intelligent & demonic elemental alien beings. They may only be affected by magic, magical weapons, & relics of super science. They have special magical abilities usable three times per day confusion as per the clerical spell (cast as a 6th level cleric), create temporary objects of metal (the softer the metal the longer it lasts, gold lasts twenty four hours whist iron lasts one round, create illusions as per the spell phantasmal force but includes both sight & sound with an effect that is permanent  until touched or dispelled). The Hmelatharchuro can make themselves invisible & make a wall of flame. They can also become a pillar of storm able to cast lightning bolts within 60 feet of themselves or become a pillar of flame that inflicts 1d8 points of damage each round  to anyone coming within five feet and it ignites combustible materials.
The Hmelatharchuro are children of storm & any water affecting spells will act as a slow spell on them. Certain esoteric rituals can dissolve them but most often these spells are held within ancient books of black magick held by certain Lovecraftian cults & schools of lost Atlantis. The Hmelatharchuro loath both Jinn and Efreeti with equal measure and will not tolerate their presence. 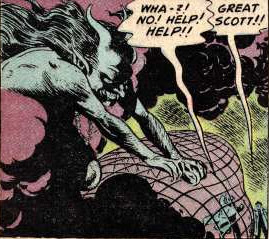 Many kingdoms loath these monsters with a passion because they are known as dynastic ruiners. Because they steal as well as collect the best & brightest whole generations of gentry, royalty, not to mention the very best minds of civilized kingdoms are lost to these mad collectors. Those who live upon their demi domain elemental islands for hundreds or thousands of years can not leave and turn to dust if taken from their domains or these monsters are slain.

The Fisherman of space is a public domain monster and first appeared in Weird Thrillers # 2 (1951)  & has been adapted by me for my upcoming weird pulp sword & black powder setting Ancient & Accursed Terra.
Posted by Needles at 11:04 PM