Alright so back about August of this past year I helped to promote The Ice Kingdoms
Kickstarter from Mad Martian games. I was just starting to really dip my toe in more Sword & Sorcery style Old School third or forth tier products. Anyhow I got absorbed by the OSR & table top gaming as I always do. Then I was contacted by the Mad Martian crew on Facebook that my book is on the way?! Alright so flash forward yesterday & really nice package arrives from Lulu. Inside was this beauty! 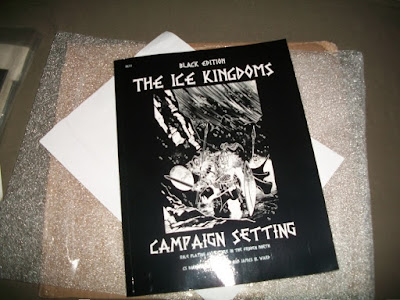 So what on Earth is this?! Well its a source book about a Viking like people with lots of deep OSR bits. I say Viking like because it draws from the Celtic (Pictish), Arthurian, Russian, Norse, & lots of other mythologies especially sword & sorcery. Here's the blurb from the Kickstarter;"The Ice Kingdoms is a fantasy setting inspired by and designed for old school RPG’s. We love the ‘feel’ of old school games and their rules, and we are creating materials that are compatible with several current systems that ‘retro-clone’ those older games. The Ice Kingdoms is compatible with OSRIC and For Gold & Glory, and our books can also be used with Swords & Wizardry, Basic Fantasy Role-Playing, and Labyrinth Lord with only very minimal conversion, as well as the original editions upon which these games are based."  So why was I interested in this Ice Kingdoms in the first place? Because I was playing boat load of Astonishing Swordsmen & Sorcerers of Hyperborea & I wanted a Viking style source book well I got it in spades. Now that being said there's a bit of THACO style system scattered throughout the book because of the source book's connection to the 'For Gold & Glory' second edition AD&D  retroclone  By Justen Brown.
Umm how do I put this delicately, I'm not a fan of second edition AD&D because the system took a lot of the teeth out of the PC's classes. This isn't me engaging in 'edition wars' bull crap but its a systemic observation of 2nd edition AD&D. The TSR second edition era world settings  were/are  incredible but the system was very bloated and heavy in many regards. THACO can be a bit of a problem for some gamers  but for us old schoolers who know a bit about conversions there's a dice and systems conversion page. There's also some  fairly detailed conversion rules in the book to make it usable with other OSR systems, including their  indexed priest spell list so this makes using Ice Kingdoms with  Swords & Wizardry, Basic Fantasy Role-Playing, Labyrinth Lord & other OSR game systems a snap. 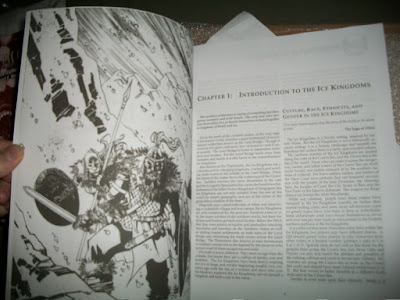 CS Barnhart is the lead designer on the project and there's a lot of his finger prints all over this sourcebook in a good way. There are multiple human tribes scattered throughout the Ice Kingdoms that resemble many of the peoples of history with their cultures resembling Greek, Arthurian, Celtic, Germanic and Russian respectively. The book is actually organized with a decent ready for it? An index of all of the material relative to the Ice Kingdoms themselves. This is a big deal for a book that deals with a world setting plus monsters, horrors, orcs, goblins, etc. yes there are the usual suspects but they've been given an Ice Kingdom paint job & well blended into the setting's cultural background. 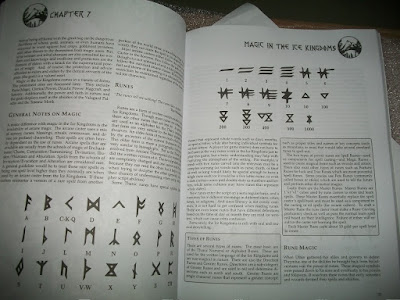 The whole book has the feel of a labor of love and hearkens back very early indie D&D style source books so on that level it appeals to me; Mad Martian also went the extra mile by enlisting the talents of writers who were themselves involved with those old books, James Ward and Ernest Gary Gygax, jr. The layout is smooth & the text is clear, the world setting is pretty detailed but not overwhelmingly so. There's plenty of room for DIY D&Ding in this one. 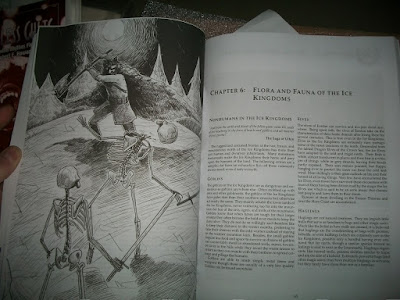 The Ice Kingdoms is a collection of borderlands stretching between fair Adierolf and vile Dargogran, a mountainous and savage untamed wilderness of marauders, monsters and mystery, known as the Land Bridge. The Land Bridge is home to the savage and misunderstood Ice Kingdoms. Between the Thansmen, the various warrior races, Ice magi, and other barbarian style hordes I'd drop these folks right into a their own setting in an Astonishing Swordsmen & Sorcerers of Hyperborea game! Floating high above Hyperborea this world comes into close orbit around that setting & then wham looting pillaging begins! The Hyperborean Viking gods are not going to get along at all with some of the gods of the Ice Kingdom. Ullr alone is a good example of a survivor of Old Earth's Ragnarok that is more then happy to send his worshipers into war against these upstarts from another world.
The book is extremely detailed and well thought out! 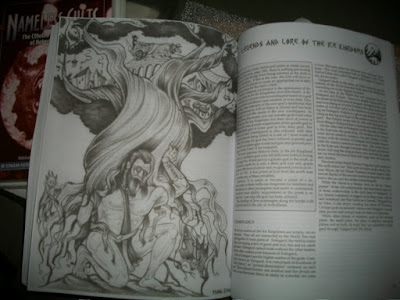 Which is why I wouldn't actually screw around with retro fitting the setting as it is. I would take the whole setting cloth & all to add into my own  low magic, high violence sword & sorcery world to add in another dimension of play and adventure.Thanks to Mad Martian Games for my copy of the Ice Kingdom and an early Christmas present!
Do you want a copy of The Ice Kingdoms for your own old school campaigns? Get in contact with Mad Martian games here!


An Updated Preview/Sample of "The Ice Kingdoms"
There's also a great Facebook support group for the Ice Kingdom
Posted by Needles at 10:38 AM