Sometimes there are adventures that I've owned and always wanted to run again, Ghost Ship of the Desert Dunes for the Astonishing Swordsmen & Sorcerers of Hyperborea is one of those. Its a great adventure that I pulled off of my hard drive & began to take a look at for an upcoming gaming event. 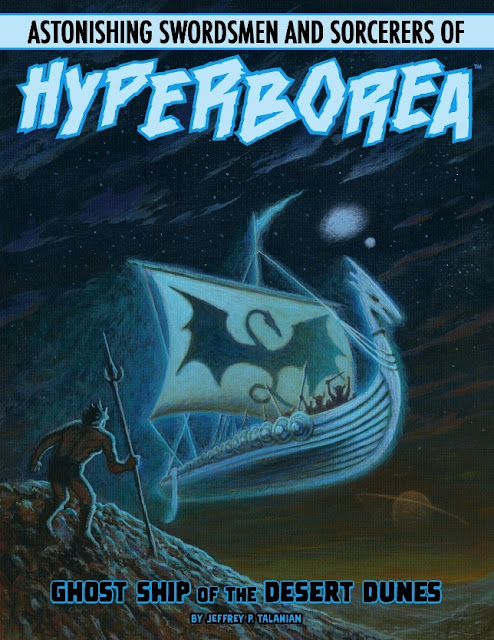 Clocking in at about sixty pages, this adventure follows the new direction of AS&SH was starting to take a few years ago. There is a coastal village with a lycanthrope issue some great rumors tables then a hunt for some radioactive green diamonds all wrapped around a plot that sounds like it came from an Eighties swords and sorcery paperback. "Somewhere in the depths of Diamond Desert lie the skeletal remains of Ymir’s Serpent, a legendary Viking longship. In days of yore, Sigtrygg Forkbeard led his company upriver, piercing the desert’s hostile heart. There the Vikings unearthed a lost mine brimming with green diamonds, but the River Æolus desiccated as the Serpent prepared for launch, and the ship was swallowed by the dunes. Forkbeard and his company were never seen again, but tales of a shimmering Viking ghost ship gliding over the dunes persist to this day."
I hadn't looked at Ghostship for a few months almost close to a year because of my dad getting sick. I had forgotten how much I enjoyed the maps of Glynn Seal of Monkey Blood Design.
I almost had forgotten about the giant radioactive ants & the hyena men who ride giant chameleons all wrapped around the central plot of the long ship! Ghost Ships is one of the those adventures that plays fast and loose with the player's PC's motives for dealing with the reality of the ship. The monsters here are vicious dangerous & highly creative. The radioactive berserker zombies are still one of my favorite monster elements of the Ghost Ship. This adventure brings a lot to the table for PC's. There's enough action to make the quest, action, sword & sorcery elements and more all work well together.Expectations of the legend of the Ghost Ship by weaving its own Hyperborean mythology and legends around Ymir’s Serpent all of the while drawing the PC's deeper and deeper into the adventure while revealing more of the mysteries of Hyperborea's glorious past.  In point of fact there is a ton of elements of dungeon crawling, investigation, a bit of plundering, and lots and lots of sword and sorcery action. This adventure adds lot of Hyperborean details and story line to the world of Hyperborea which brings me to the point. This isn't simply another bit of Astonishing Swordsmen and Sorcerers of Hyperborea but a full blown expansion. 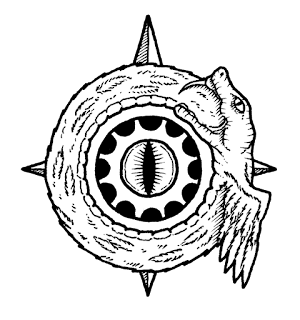 Everything in this adventure fits together like a glove, the adventure elements are not that over the top to be on the stupid or completely gonzo. They work and work well together. The PC's are not going to be coming out of the adventure with all kinds of campaign wrecking treasure. If they survive the experiences of  The Ghost Ship of the Desert Dunes there will certainly be a profound respect for the creative effort that the author brings to the table  with this one. 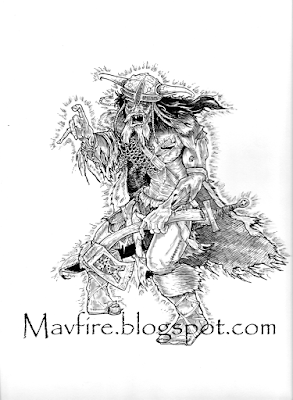 Ghost Ship of The Desert Dunes remains an old favorite of mine and a very dangerous adventure to unleash on a party of unsuspecting adventurers. Its an adventure that has great risks but deep rewards. Ghost Ship is well written and easily available through Drivethrrpg.

GRAB IT RIGHT OVER HERE
Posted by Needles at 12:06 AM